One Last Day in Italy

One thing you will find everywhere in Italy is the coffee. Apparently it will cost more to sit down to drink, some sort of tax or something, so must prefer to stand. Espresso is the drink of choice with Cappacinnio and latte in 2nd place. Little stands are everywhere and fortunately, not the big chain stores. I found a coffee drinking friend in Terri, a woman on this trip. We attempted to try the coffee from as many stands as possible.

We had some free time at night and were at the Plazza Navona. There is a fountain, Fontana dei Quattro Fiumi http://www.rome.info/bernini/fountain-four-rivers with 4 figures which represent the 4 rivers of the world: Ganges, Nile, Danube and Rio de la Plata.

Terri and I sat down at a little outdoor restaurant, right on the square, and had a cappuccino. Perfect way to people watch the passer byers and the street merchants running up to the square with their products, then folding up shop and moving along quickly when the police arrive.
Kids had fun this night when they ran around exploring the areas.

We had to get up early to go to the Vatican, Sistine Chapel, St. Peter’s Basilica and the Pantheon.

We went 1st on a walking tour, much of where we’d walked the night before. Then ended up at the Pantheon. I didn’t realize before but Raphael was buried at the Pantheon so I ran in for a view and photo of his grave.

We picked up lunch to go but, not before picking up a specialty coffee at the Tazza D’Oro Coffee Shop. http://www.tazzadorocoffeeshop.com/en/home.html. The coffee is an iced drink, “Granita Caffe de pana”. This coffee consists of whipped cream then iced espresso then another layer of whipped cream. Terri and I looked at the glass of coffee and thought “this isn’t coffee, this is ice cream. Then one taste and we were in coffee heaven. You can only get the real Granita Caffe at the area of the Pantheon. The rest are fakes.

After a bus ride to the Vatican City Sunny decided to walk, even if it was slow. She didn’t want to miss the tour, which she would do using the wheelchair. We met our guide who told us “this is not my first rodeo”, she would have the group go at our pace. The guide took the time to explain things when there was a place for Sunny to sit, or have Sunny take a short cut where there were things that were not quite so important to see. We were able to make it thru the entire city with Sunny getting a seat along the wall of the Sistine chapel with a great view of the ceiling. 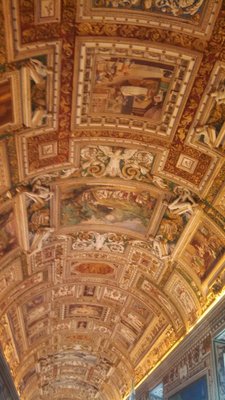 The ceiling of walls of the Sistine chapel are so amazing. There are so many imagaes pn the ceiling that no matter how much one looks there is something which is new. To think that Michelangelo was not a painter is unbelievable.

When we came out of St Peter’s Basilica Sunny was in pain. She could hardly walk but wanted to still take photos. We shot so many photos.
As she went slower and slower the rest of the group went ahead on down the hill. They could see us and see that she needed help. They told us later that they had a talk on how to get her down easily. They sent a student, Juan, and another girl to help. Juan was to carry her and carry her he did, on his back all the way down to the group. Then others put arms around her to help take the weight off while she walked. It was truly a group effort. 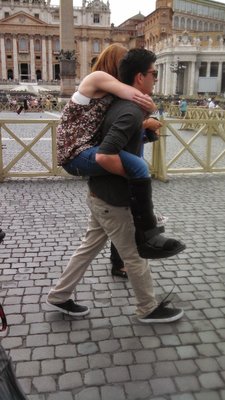 We made our way to the bus with a stop at a souvenir shop where I found many Ferrari items and a book of the Sistine Chapel for Sunny.
Next stop was dinner, a pizza dinner, with chicken and sautéed veges for me. This was our last dinner together, the last wine for the Red Wine Sippers in Italy.

Alas Italy was over, and without my bag.