The trains that had problems

We were so happy to visit with Tobias, his wife and 2 daughters for overnight and then got to see his parents the following day after walking to the lake. The girls, ages 4 and 1-1/2 finally started talking to us and even let me kiss them.

Tobias’ mom put us on the train to Salzburg and we would have a change in Pasing, then the train would go all the way to Salzburg. But Tobias also found that the train in Pasing was a little late so we should be fine. We got to Pasing and found the track as Tobias had said so settled in to wait.

As we waited the notice changed and the train was going to be even later, this should have been a sign of things to come but Dale and I were hopeful and didn’t let this bother us. Fortunately a German passenger came along to advise that the train coming, with the correct number, was in fact not the correct train and we were able to stop one further disaster.

Finally the train arrived and we hopped on finding a seat. As we did not have a reservation we didn’t get completely settled in and instead went to the food car to have some dinner and scenery.

We’d been traveling along, sipping beer and eating sausages until the sun went down. We thought that it would be good to maybe get into a more confortable seat and that I’d actually work on a claim that had come up just before leaving the U.S. We found some seats just outside the clear glass door from the food area but we could see inside thru the glass door.

We were somewhere in the middle of nowhere and it was pitch dark outside when the train stopped cold. During a long announcement we saw a man in the food area put his hand to his head so we got up to see what was going on now. It seems that the tracks were being worked on so the train would be stopped for awhile then would travel for 20 minutes to the next stop, then we would change to another train that would arrive maybe 50 minutes later for a 5 minute ride into Salzburg.

By the time we got into Salzburg it was 10:30 p.m. and we opted for a cab ride to the hotel instead of a walk. We were so happy to see our hotel but we had no idea of the continuation of adventures to come. Hotel stays will be a separate blog entry. 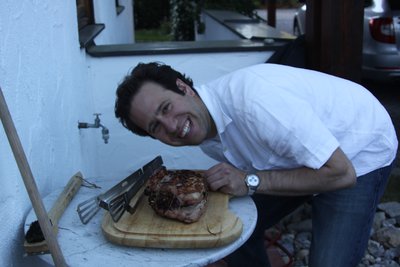 We are the Americans Who Know Everything!

Knowing everything but knowing nothing at all.

Our next stop was to meet with our former exchange student Tobias who is now married with 2 girls of his own. Tobias stayed with us for 1 year back in about 1994 when he and 2 of our boys were in high school. We’d arranged to meet Tobias in the town of Herrshing, a town just 30 minutes southwest of Munich. “Just take the S8 train to Herrshing and I will meet you there” he said. Ok, no problem.

We stopped at the main station 1st to reserve our seats for the trip from Prague then hopped on the S8 as directed from the Munich main station. We were just moving right along but then we were not sure of where Herrshing might be. We asked an Asian man in the seat across from ours and as it turned out he was from Maryland enroute to a conference in Herrshing. He said that he’d traveled this route several times and that Herrshing was the last stop.

The train car was not full so we started talking about traveling in Europe and more specifically Germany. I laughingly told him how I tell my friend Dieter that “we are from the U.S. so we know it all, and since we are from California we really know it all”. Dieter always answers “oh you Ammi’s”, the German slang for Americans.

After talking for a few minutes the train stopped about 3 stops short of Herrshing and everyone got off. We thought that it was funny that we were the only ones on the train but our new friend assured us that the train had only stopped for another train to pass. We wondered how long the train would be stopped but soon a train passed so we were assured that we would be moving soon.

In the meantime Tobias was texting, asking where we were. Well we didn’t know where we were and why the S8 wasn’t going where it was suppose to go. Sorry Ammi’s we were turning out to be! So there I was trying to text Tobias and trying to figure out where in the world we were to go.

We and our friend were at the platform looking at what to do next when another S8 train came along but this time it said Herrshing and we got on. After sitting down and the train began to move the 3 of us started laughing about the know-it-all Americans! We laughed so hard tears were running down my cheeks.