After all of the keeping up with kids, Dale and I were happy to have a couple of days to ourselves.

We left the South Beach campground on Sunday and drove south on Hwy 101. This is the coast highway in Oregon. We needed to work our way to Fort Bidwell, but pulling our RV we were a little concerned about road conditions. We were not wanting to pull the RV over a snowy or icy pass. We decided to take a more southern route across.

On our way down we found a small seafood market open. Until then, all had been closed. We stopped immediately and I ran in. There was fresh caught wild salmon and fresh oysters. We were ready for a feast!

As we looked at campgrounds that would be in the area of our route we found the Sunset Beach Campground. There were a couple of others around the Sunset Beach but after driving thru those we just kept going. We drove into Sunset Beach and found a space that was perfect. The site was in the corner and there were no neighbors. http://oregonstateparks.org/index.cfm?do=parkPage.dsp_parkPage&parkId=182 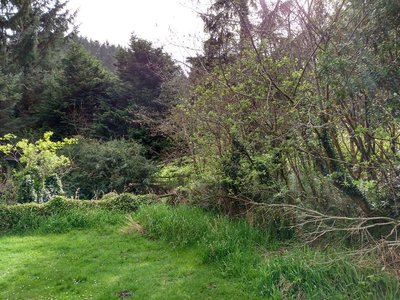 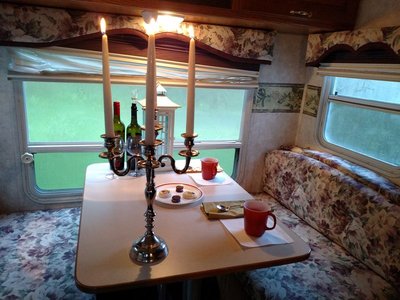 There had been rain in the area, but it let up before we arrived. About sunset, the clouds parted and we walked to the beach across the street. I took the camera and started shooting photos. It was so beautiful. 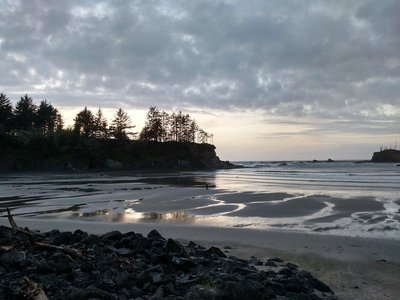 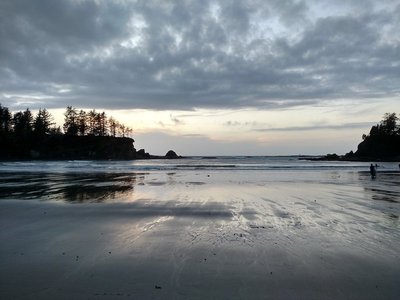 For dinner, we set up our Downton candelabra, silver flatware and ate our salmon Downton RV style. 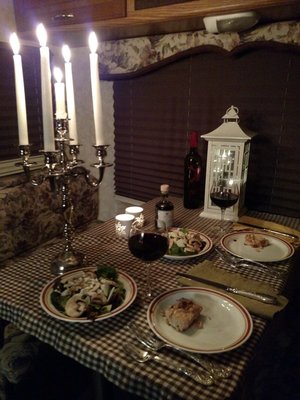 That was a perfect ending to our alone time. Ever onward, we were off to Ft Bidwell in the northeast corner of California and then down to the southern border.

Earlier this year we started planning a family camping trip to Sunset Beach. This was a trip to include our 3 boys and families. We would take our RV and the others their tents. Jen was the main one to keep us on track for this trip. Kids had planned all of the meals except breakfast Monday a.m. and we were in charge of that. Kids were so helpful.

I arrived back at home late Thursday night on the 11:30pm flight. It was so great to be back, but also a little stressful as we needed to leave on Friday after our granddaughter was finished with school.

Since I was just on East Coast time it was easy to wake up early. I was so tired on the way home that I couldn’t stay awake at all, so slept through most of my flights. This gave me a little extra rest and worked out well for me.

We got up early Friday morning and started packing the RV, but because we had so many other things to do got off to a really late start on Friday. We picked up Justin and boys and on our way by 7ish. We were nearly at Sunset Beach when I told Dale that I was surprised that we never saw Nate/Bekki when driving. We see them on the road so many times at random places. Soon another car started following us. Now it is probably 11pm and Nate/Bekki was to leave by 5pm. But guess what? It was Nate/Bekki and family. They followed us on a wrong turn and a detour then we drove into the campground together.

We had 2 campsites next to each other while Clayton/Jen had one on another loop. As Jen had recently decided that they would stay in a nearby hotel as Fynn was so little, their campsite went empty. Then, as it turned out, Zoey was really sick, throwing up; good thing they had a hotel.
We sat around the campground and then the beach on Sat. just vegeing out. Unfortunately, Clayton had to do a bunch of unexpected work so the trip wasn’t working well for them.

By Sunday Zoey’s vomiting was going on strong and Clayton had to go back into his office. So much for that family trip. 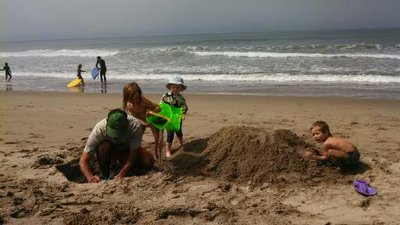 We salvaged the trip by going to our traditional haunt “Santa Cruz Boardwalk”. We did our traditional family ride on the Giant Dipper, love that old wood roller coaster. Otherwise it was more sitting on the beach, eating and just plain ol’ doing nothing!