A concert at the St. Charles Church

We had reservations for an early train from Salzburg as we had tickets for the Mozart Requiem in Vienna at, what we thought, was 3pm. This time we walked the 15 minute walk to the station and got right on our train.

Arriving in Vienna we found the U line to get to our hotel, it is easy to use. Just find the map where you want to go then find the corresponding line to the color. Print your tickets and presto magic off you go to your platform and you are on your way. We found our line and came out at St. Stephens plaza. Another amazing cathedral! We reviewed our map, got our bearings and started for the hotel which was only another 5 minute walk.

The Hotel gave us our rooms within minutes along with some sparkling wine; we changed our clothes and started walking. 1st we walked down to the St. Charles cathedral in order to see if our tickets were there; I couldn’t remember if the tickets were on hold or what I’d done. Sure enough the tickets were on hold and the lady helping us said we had some of the best seats, row 2 center. But she then told us that the concert was actually at 8pm not 3pm so here we were all dressed with nowhere to go. We came back to the hotel, changed and started walking into the main old city.

At first I wasn’t impressed at all with Vienna, we’d walked up and down the street and it was nothing but cafés, shops and tons of people. Then Dale and I walked down a side street and found wonderful buildings one after the other. We just walked with our faces to the skies.

We changed then made our way down to the St. Charles again for the concert. This time we joined the line of people waiting to get inside.

The church is not as large as “The Dome” or St. Stephens but large never-the-less. The stage, or front, is in a sense set apart from the rest of the church; 3’ higher, more narrow on the sides and the ceiling higher than the sanctuary area. From where I sat the stage was about 10’ in front of me with the orchestra at the front of the stage and the choir behind them. On the wall behind the choir was a cloud with angels that extended nearly to the ceiling.

The music was played on the antique instruments and being so close we could hear each instrument that normally would get lost in the whole sound. The sound of each instrument was different than the more modern ones used today that we are used to. The sounds plus the setting put us back into Mozart’s time. The setting was so heavenly that we found the music belonged in and was made for a Cathedral.

From the moments of the 1st note the audience was enraptured and completely quiet. When the music would break for a moment the echoes would continue for several seconds. The conductor only used his hands for direction and then in such a tender way.

At the end of the concert no one moved at all as the music echoed and we sat there, almost in a stunned state, unable to move. Finally, the director signaled that the performers could bow and the audience went wild. The singers came back for an encore but we could have had several encores 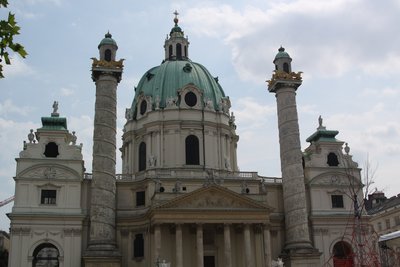 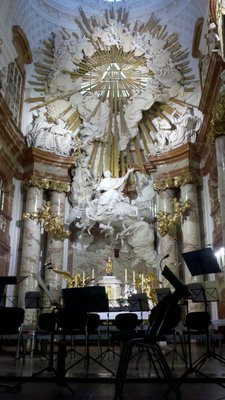