A Snake In the Night

A snake in the Joshua Tree Campground

Before Dale and I were married, and after, until the farm, we’d take off on our weekends to go wherever we wanted to go. Dale had a VW camper van and it was quite perfect for the 2 of us. We went to Solvang, Big Sur, San Diego, up and down the coast.

We’d been home for a week from Dallas and Oklahoma when I just felt like we needed to be the free birds we once were. Drama and family issues were pulling us in and I did not want to be a part of it. Additionally, since there has still been no work and Dale is retired, there seemed no reason to stay put. Well, there are plenty of projects to get done at home and in the RV, but those can be ignored. I told Dale that we should just pack up and go to Joshua Tree and he agreed.

We decided that we’d return home on Thurs, for no particular reason. We sat down and made some menus, then packed up what we’d need.
We got a late start out of Bakersfield as the truck seemed to be presenting problems for which there seemed to be no fix. Fortunately, Joshua Tree is only a 4-hour drive, however, with afternoon traffic, it was a little over 5 hours.

It was really getting dark when we arrived at Joshua Tree and there are few lights in the area. We decided to go directly to the closest campground, thinking that we’d leave in the morning when we could find a better site.

We drove into the campground and up past the visitor center when the paved roads turned into partially paved and rutted roads. In the dark, we couldn’t tell if we were on a road or a trail.

We drove out from the rutted roads and onto the main road, not knowing where we were, and ending up outside of the park. We found a place to turn around and went back into the park taking the 1st site we saw.

Dale backed into the site, and we got out into freezing winds. After setting up the RV we looked around a bit. Dale yelled for me to come to where he was, there on the ground was a snake. In the light of our flashlight, it looked like it was a mid-size snake with its head up. Now we are not snake people at all, so had no idea what we were looking at, except to move out of the way. We were grateful for an RV and not just a sleeping bag on the ground. 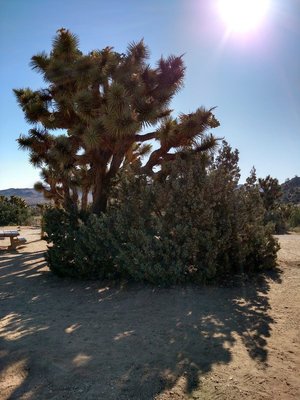 In the morning we went outside, only to find the snake still there, still in the same position. Again, as we do not like snakes, we were uncertain. Dale found a stick and after poking it discovered that the snake was only a toy. We had a good laugh and suspect that whoever left it had a good laugh as well. 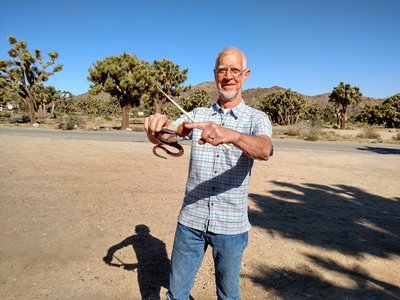 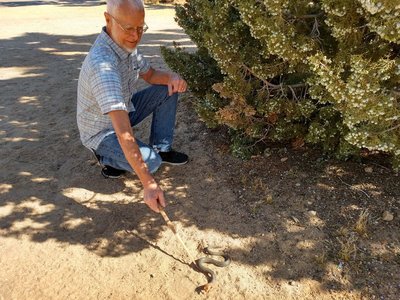