Touring Regensburg in the Rain

We planned to net up with Dieter, repack, and then head out for Prague. Dieter emailed and asked if we might meet in Regensburg instead at 2pm. I’d wanted Dale to see Regensburg so this would be perfect. What was a little rain and freezing cold about 55F

We found Dieter waiting for us, he hopped into our car and directed us to parking at the old city. He had arraigned for us to have a guided of Regensburg.
We met our guide, what a wonderful gift Dieter gave us.

The guide started at the old, original gate built by the Romans. As we stood in front of the oldest hotel we heard the story of Emperor Charles V who was visiting Regensburg and saw a beautiful young girl, spent the night at the hotel with her and the outcome was a son, Don Juan of Austria. http://www.hotel-goldeneskreuz.de/ 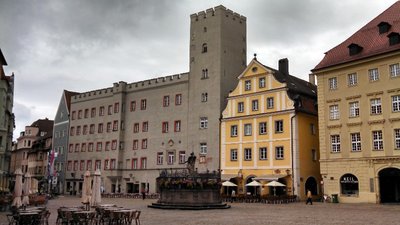 The guide pointed out “stumble stones” in the pavement. This is a brass tile set into the walkway with the name of a Jewish family. The family would have lived in the house and removed by the Nazis. Most family members were completely wiped out.

We walked by a wood and stone house from the middle ages being refurbished. It will be open to the public in the next year or so.

After our tour we were cold and starving so we went back to the oldest restaurant where the sausages were being sold. The restaurant originally served the workers who built the bridge. The sausages are the ones I remember eating at the Christmas market years ago and I was happy that Dale and Elias would have the chance to try them. We ordered a platter of 10 with sauerkraut. That wasn’t enough so we had to get another platter of 10. 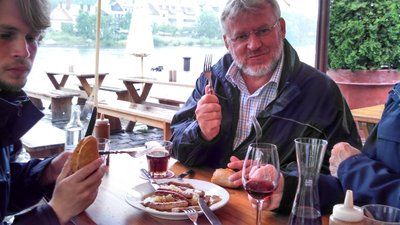