In and around Taos

Like I posted earlier we were going to fly to Taos, NM in order to save Dale’s Frequent Flier Miles from expiring. Good logic according to us.

We flew into Albuquerque and drove to Taos last night arriving in time to eat dinner. We checked into our hotel, The Historic Taos Inn, right at the plaza. I’d reserved early and got us a room with a kiva (pueblo type fireplace) and we were happily surprised to find wood and fire starter waiting for us. The old hotel is made up of adobe buildings from the 1800’s and I think, but am not sure, that there is a newer wing too. We wanted the old part.

We went to Doc Martins for dinner, the restaurant attached to the hotel. When the waitress came over I asked about gluten in the New Mexican meals and was dismayed to find that everything New Mexican contains flour. I can eat steak at home; I wanted enchiladas or something local. The waitress spoke to the chef and then reported that the chef would make a special meal, New Mexican, gluten free just for me. So I had a trout fillet with a cream/chili top and corn/small squash/chilies and cheese. We drank an entire bottle of New Mexico champagne with dinner.

This morning after a breakfast of chili stew from another favorite restaurant we went off to the Picuris Pueblo. This pueblo is off of the high road between Taos and Santa Fe, a road we have often wanted to drive. The road was cleared of snow so we were able to drive without a problem.

The Picuris Pueblo is quite different than the Taos Pueblo in that there is not a central plaza with homes on 2 sides. Here there is a church, the 3rd one built there from the 1700’s; I hate to ask the years of the prior 2. The church is not located in the plaza but stands alone then houses are nearby and extend up the hill.

We stopped at the administration building and asked about the store we’d read about. Well the store has been under remodel for several years and remodel has not been completed. We then asked if there was Picuris pottery available nearby, that we’d prefer to buy from the potter if possible. The 2 people in the office discussed who the local potters were and decided we should see Irene Simbula who lives at the top of the short hill. Now Irene doesn’t have a phone so we just had to drive there but she should be home. They drew a detailed map with Grandma’s house and Aunt someone’s house and Irene’s house.

About 5 minutes later we were at what we figured was Irene’s house. We went to the door and asked the woman who answered if she was Irene Simbula and she answered “yes”. We asked if she had pottery available and she said yes and invited us in. She pulled out of bags pots that she had made; after the mud was blessed she washed the mud then made the pots, then during the winter fired the pots in her wood burning stove that we were standing next to. The pots can be used to cook beans in; she brought in her own pot from off the stove, about 60 years old. Apparently, her daughter also makes beautiful pots that we fell in love with.

We were only going to purchase one pot and even though we loved the one by her daughter we wanted the one made by Irene. Then I felt very strongly that we should buy both. I told Dale that we had to get both pots, and then told Irene. After we paid for the pots she told me how she had just been divorced, husband had run off with someone else, business has been slow, she had recent dental problems and had been worried about how to pay for her car insurance. Now she was going to be ok.

On our way back to Taos I had a huge scare. We’d decided to drive the road thru the Rio Grande. We did but then had to go back to the high road due to snow. Once on the high road I wanted to stop to shoot photos. We crossed the busy highway and I shot photos from the shoulder. After finishing up we thought we run back across as there was a never ending stream of cars. As I got into the middle of the lane I tripped and fell, my camera banging on the asphalt. I was so scarred, as I’d noticed a car coming around the corner, certain that I was about to be hit I got up, trying to run. Fortunately my husband was right there and stopped me as the car had stopped in that lane. So hands scrapped, knee thumped and camera banged up we made it back to Taos. Camera was a big concern but with the heavy body it survived, lens didn’t even seem to take a hit at all.

I consoled myself at a little restaurant that only serves gluten free New Mexican food eating chili rellenos as a snack before dinner. 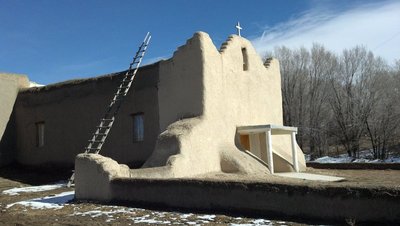 Pots from the Picuris Pueblo

Many years ago I was in New Mexico and stopped at a shop for coffee, I ended up buying a bowl, about 900 years old. It had been broken and glued together so it didn’t cost much, maybe $40.00. That was the beginning of my antiquities collection. Now there are people who do not think that these items belong in private collections, I like my bowls so there it is.

Since that early bowl I’ve collected a few others, I prefer the old ones, you can feel the places where the maker placed their fingers. They are not fancy but were used for meals or everyday containers. There is a connection.

Dale bought a book on pots that we found at the Grand Canyon, turned out that our pot was discussed, or at least one like it. But recently Dale was re-reading the book and found a section on the Picuris Pueblo and their pots. The pots from this area have more mica in them giving them a glittery look. The pots are a specialty for beans, a utilitarian pot rather than one for finery. They do make all sorts of clay items though.

We did some research and found that there are pot makers and that the pots are usable. We found one who makes pots, I emailed only to hear back that she is in California. Boo! We want one from someone who lives there.

I think that we will go to the Picuris Pueblo when we are in Taos next week; it is only 30 miles from Taos. We can go to the museum and gift shop then see if we can buy something very local. Can’t wait to see how the beans turn out!