Happy Birthday In the Backcountry 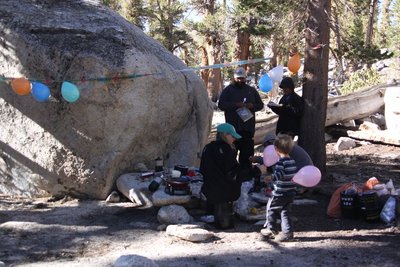 I started this page at 6:30 a.m. and the only one awake. I’d hung up a happy birthday on crepe paper banner between the trees then went to set in the sun.

I was sitting on a hill behind the camp with the sun coming up over the mountain so the camp wasn’t bathed in sun yet. The hill isn’t heavily forested with lots of rocks and some debris from the trees and small grass filling in. The sunlight was filtering thru the branches of the trees turning the bark to orange and red.

It was cold, really cold but the cup of hot coffee felt good in my hands and going down the throat. I thought that this would be our last full day so was determine to enjoy it.

Justin woke up before we’d decorated more but we blew up balloons and hung them on the banner. Charlotte made French toast out of left over bread and I made syrup from freeze dried blueberries, water and sugar. There was just enough bread to give everyone a piece or two.
Justin hadn’t slept well and neither had most of us; too cold. Justin thought that he’d really like to start down and go on home. We agreed that we’d love to have a better night sleep. So we started packing up to hike back. 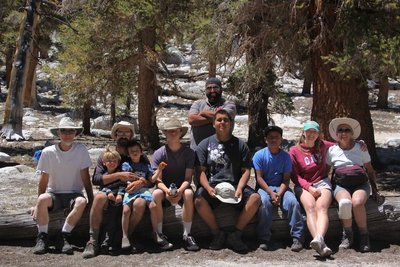 The trip down the hill was uneventful, stopping for lunch by a stream. Kids played in one stream, throwing rocks into the water and pretending to catch fish. 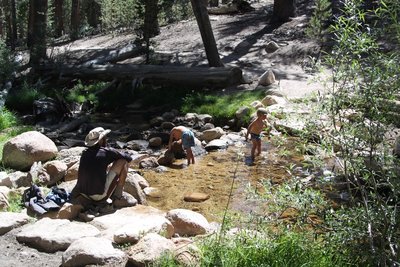 We would have made it home that night after eating a birthday dinner for Justin but alas, there was a car issue so we were stuck in Lone Pine overnight. But we were very happy for the shower at the motel room.

It's About the Journey

The destination is important too but it is how you get there.

There are not many better places to write in this world. I’m sitting on a log with trees around me, a deep blue sky, a lake in the background, no noise except our voices. 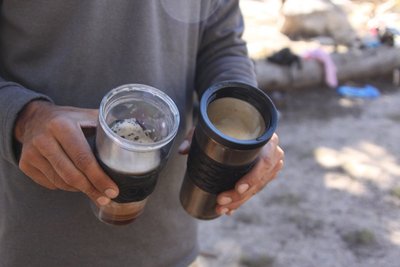 One thing I haven’t written about is that hiking with a pack in a high altitude setting is hard work. I’m slow, slower than slow, slower than the slowest. It gets discouraging at times. It gets discouraging to be the slowest of the slow. The packs are heavier than heavy. The back hurts, feet and toes hurt. Lungs are gasping for air, sucking the pine needles off the trees like Cam said so perfectly. Throat is dry from sucking the air, so dry that to swallow makes you sick. Meanwhile after hiking for what seems so long one finds that they are only ½ way there. Covered in dust from the trail one comes across a rock large enough to sit on and rest the pack on at the same time. You look out to see the landscape, quiet, maybe a stream nearby surrounded by nature. This is what it is about. Justin put it so succinctly: “it isn’t about the destination, it is about the journey”.

Arriving at the destination though is a feat of accomplishment for someone like me. I’ve made it! I can do it! Living up to the expectations of the grandkids is what I must do. And yes we didn’t make it to all of the lakes we wanted to but we made it.

Then to eat good tasting food and to have the grandkids say they love the food, we know that we succeeded in our goals. To have others decide, after much laughing, that yes the wine was a great idea and that they will bring wine next time so that instead of a couple of sips of mine on one evening there will be a glass every evening. 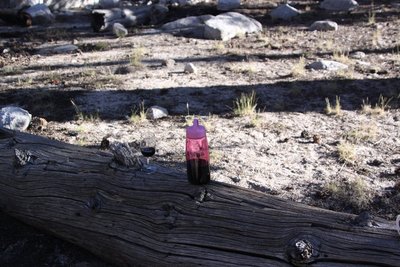 Everyone except the little kids and me went on a hike to a ridge that overlooks the valley. I was impressed that Cam made it to the top. It took all his will to do this but he made it to stand on top of this bit of the world. Kids fell asleep, tired from the past 3 days of hiking and hiking. I enjoyed my time alone. 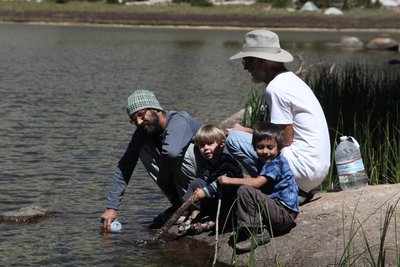 We were leaving our camp with packs full to hike to Hidden Lake. A trail would lead to a cutoff just past the stream, then we’d head off up over the hill with no trail (Donner Party?). We were there 12 years ago but could never find our way now.

Since we had to pack up whatever remained we were then the last ones out. The plan formed was that Justin would lead Elias and Charlotte to the lake then Elias and Justin would empty their packs and return while Charlotte would stay behind and guard for bears.

Justin returned with his pack emptied, packed up the trash to go out and stuff not needed for the remainder of the trip, packed it up and started down to the base camp. He would unload everything at the base camp, pick up our cache and return to Hidden Lake.
Elias returned repacked his pack and led us off to the promised lake (land?)

As we hiked I was slowest of course but Sequoia and Lucian needed attention so it was fine. We soon decided that Elias would go on to the lake with Cam’s boys then return for us stragglers. He would leave the tent at the point where we’d leave the trail. We’d either find the tent or Elias at the cutoff.

We did run into several Search & Rescue folks. We asked about the missing person and were told that his body had been found. It appeared that the guy took a wrong turn and instead of heading up the mountain, went down a side trail falling 200’ to his death. Sobering thought.
We made our connection with the tent and Elias, who was running down the hill at the same moment. Now to climb up this hill with no trail and heavy packs and poor Elias carried a third pack for the day.

We’d made a couple of stops to catch our breath when Cam said he had a pebble in his shoe. We stopped while he took off his boot only to find that the sole had split completely thru. That will make for a bad hike down the hill. 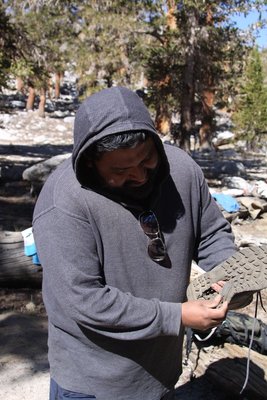 We arrived at the lake and set up camp. While cooking dinner I told Charlotte that Justin should be there at any minute, I’d been starting to watch the time. No sooner than the words were out of my mouth when Justin came around the large rock at our kitchen. Am I a psychic or what? 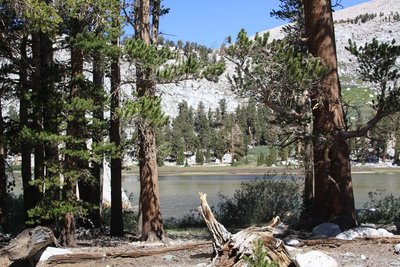 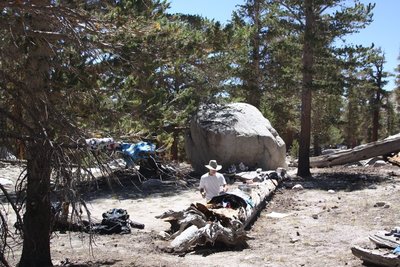 Day 2 of our trip and we are finally going to hike.

We were supposed to be camping by the Cottonwood Creek but now are just there. Justin left the party before us with his boys and met Elias and Charlotte at a designated stream crossing. Last to leave were Dale and I; we’d stayed behind to clean up camp and pack up all of the things Justin couldn’t get into his pack. 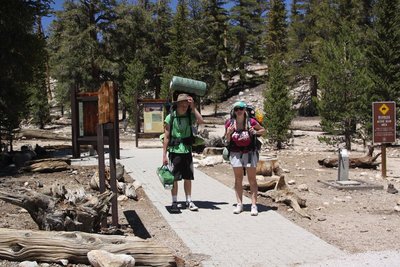 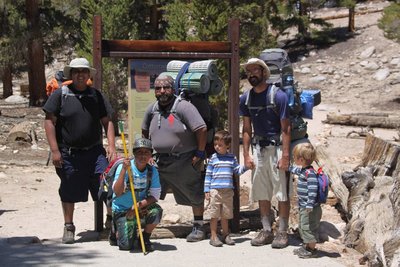 As we were packing up several “Search and Rescue” vehicles came into the area, one parking area became a command post with a trailer filled with heavy duty radios. We asked one sheriff about who was missing and he told us a man who’d tried to scale Mt. Langley. As Justin is hoping to scale this Mt. on Saturday I’m a little worried. 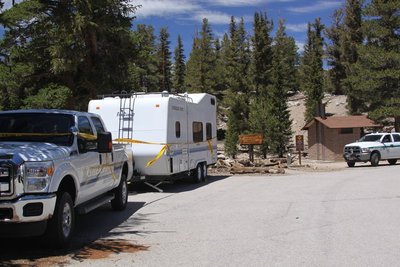 There was some concern as we didn’t know exactly where the camp so in preplan we designated Charlotte and Elias to drop their packs at the new camp and come back to guide us. It was a welcome relief when they returned and even nicer for me when Elias took my pack and ran off up the trail. You think I’m kidding about running? Well he ran! 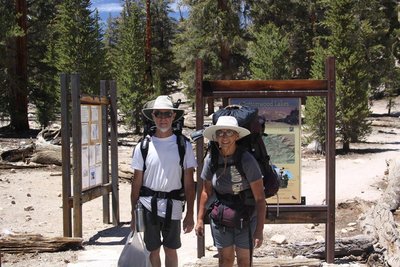 The same log was lying across the stream leading to the camp, a little more worn but I walked across It was fun to be back after 12 years. Since it was late afternoon we had to start dinner right away and set up our camp. 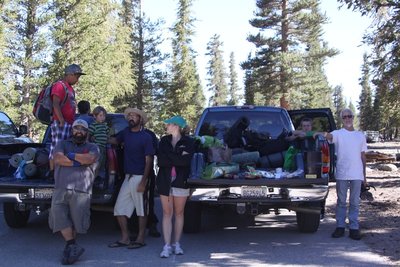 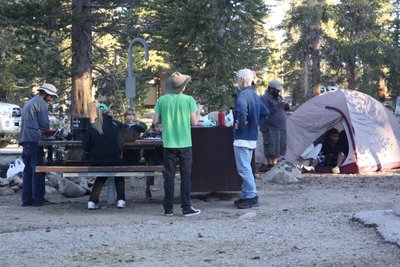 So we are back and it is hard to think about the real world now. Fortunately I wrote while gone otherwise it would be too difficult to go back and piece together this trip. So here it goes:

Unfortunately, starting late in the morning for a trip means a late arrival. So our 1st days plan had to be changed.

We did make it in 3 hours to the ranger station/Visitor Center only to find that we had not confirmed our reservations to hike within the given time frame so that our reservations were canceled at 11a.m., a common occurrence as per the ranger. There were, however, enough open spaces so that we could still hike as planned.

We had to rent bear cans to hold our food when in camp so we parked in the shade and repacked all of our bags in order to carry the bear cans. We were lucky because at the walk-in area at the trailhead bear lockers were available for use as a cache. We only needed to carry up supplies enough for ½ of the trip.

Because it was already 4 p.m. by the time we reached the trailhead we thought it best to camp in the campground then start our hike in the morning. Also it would eliminate a large quantity of food.

After our dinner of Curry Chicken, rice, veges and salad we were all ready for some sleep.