Munich: A Palace and Yet Another Beer garden

A visit to the Nymphenburg and its beer garden

The hotel staff suggested that we visit the Schloss Nymphenburg, a castle close to our hotel. As we had until 6p.m, when Silvia’s train was leaving we thought it would make for a nice morning trip. After a breakfast and coffee at Good Fellows we were off to the castle.

I really wanted to tour the castle but Silvia suggested that we just tour the 400+ acres of gardens this time, maybe touring the castle at a later date when it might be raining. This turned out to be an excellent idea as when we looked in the window we saw that reconstruction was going on so chandeliers were covered with plastic and one wall was completely boarded up.

The gardens actually consist of several small gardens close to the castle and then large grounds with lots of intersecting paths leading to a large lake complete with a bath house used by Ludwig. We walked 1st to the lake then around it then we were thirsty so we continued straight away to the beer garden.

The beer garden is located in what used to be a palm house. The house is now a restaurant and the walk up stand is just outside. The restaurant severs a nice roast chicken but we were hungry for the beer, sausage and potato salad; a great Mother’s Day brunch for sure.

Silvia had to leave soon after we returned to the hotel so we walked her to the train station and then we went back to the square to enjoy the evening. I turned out to be a very cold windy evening but we still sat outside, in the shadow of the historic buildings, drinking cappuccino and listening to the beautiful classical music from the street musicians.

We did move inside, not knowing until we were seated, we were in one of the oldest beer halls in Munich, from the 1600’s. 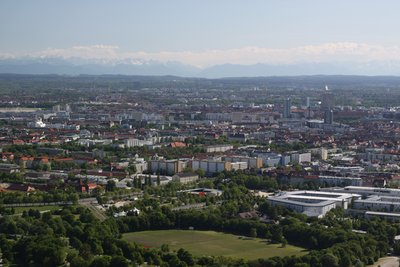 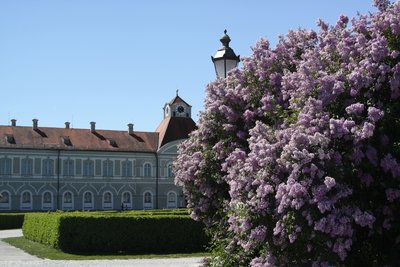