Starting to put the dream of living abroad into a reality

We have thought for some time that we’d like to live in other places for a time. We’d originally thought we’d live away for a year at a time but now have reconsidered that. We think that our grandkids wouldn’t be able to visit more than once and my mom would not visit at all. Also, after last year’s emergency with our granddaughter we realized that we can’t leave for so long so think that 4 months would be a good fit for now.

We’d originally thought that we’d go to Alaska for our first stint but after dreaming about operas in Europe for the past few months we think it would be good to start in Europe. We were thinking something close to Vienna, Salzburg and Prague would be good.

I sent out an email to our European friends and one, who has traveled extensively, suggested Austria. He has suggested the area of Wachau area and specifically the cities of Spitz, Weissenburg, Duernstein and Krems. We have just started to look at each city to see if it would be a good fit.

We do want to live in a village, walking distance to the square where we can have coffee. Jen demands a brew pub in the town. We also want to be near transportation or a freeway to get around easily.

Another friend reminded us that her husband works in real estate so can help with housing. We would prefer a house but would take a flat if necessary. We must have 2 bedrooms so that friends and family can visit.

Now we will buy a good map and review the cities suggested both on-line and in the travel books. We will select maybe 2 or 3 and put them out for a vote.

Since we plan to leave in April we must start this process as we will leave in about 1 year from now.

An Opera at the Estates Theater

Attending a Mozart opera at the Estates Theater

When I first visited Prague, maybe 8 or 9 years ago, I was with my friends Dieter and Inge. We did a walking tour of the old town, Stare Mesto. This area was originally laid out in about 800a.d. and some structures are still used which were built in the 13th and 14th centuries. Now I’ve been to the Middle East and our own Mesa Verde so ancient is something I’ve experienced before but I’ll never forget the 1st time I saw the Estates Theater just a short walk from the square.

The Estates Theater was built in 1783 and is nearly all preserved in its original state, except for the wiring for electric lights and plumbing for modern flush toilets. This is the theater where Mozart opened Don Giovanni, conducting the opera himself and Paganini, Clara Schumann and Wagner performed here. The interior is mostly blue velvet with gold trim. The ceiling is very simple with a huge chandelier.

So the 1st and 2nd time I saw the Estates we could not go in as there are no tours. I determined that I did would return to Prague to see a performance in the Estates. I really wanted to see Don Giovanni but alas that was not to be as May was one of the only months in which it was not playing. We did find tickets to see the Barber of Seville and since that was a Mozart production it was going to be good enough.

Our box seat was about 3 boxes away from the stage and the 1st row up with 2 chairs and 1 high chair. We looked down to the poor saps below and looked up to the nose bleed section where some people had to stand up and we were feeling very smug indeed!

The stage is different than the one at the opera house in that stage is completely separated by the orchestra pit. This production was also different in that the costumes were period. But what a wonderful production the singing was so great and we were just above the orchestra so that we could watch the conductor closely as well as the various individuals. I went back in time and imagined Mozart conducting. We did learn some very fun sayings like: “my face lies but I do not”.

After the performance was over we took our time leaving our box, looking lovingly around. Then as we slowly walked out we stood for a very long time just admiring the theater and reflecting on what we had just experienced. It appeared that most everyone did the same.

We walked back to the square, probably like most did in the 1700’s, found a little outdoor café and had some good Czech food.

A guide book had suggested that a very romantic thing to do at night is to take a bottle of Czech bubbly out to the middle of the Charles Bridge and have a drink. We did just that along with some cream truffles. What an end to a most amazing night, standing on the Bridge in the moonlight looking that the reflections of the castle in the water. 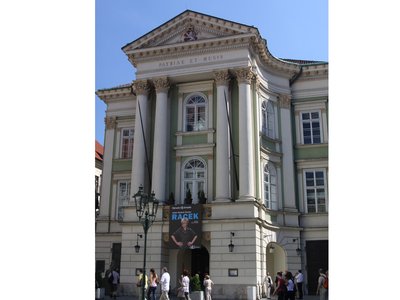 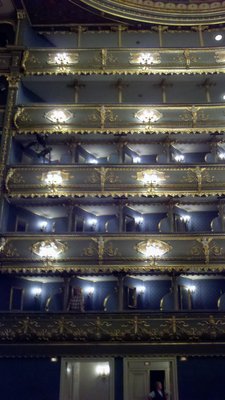 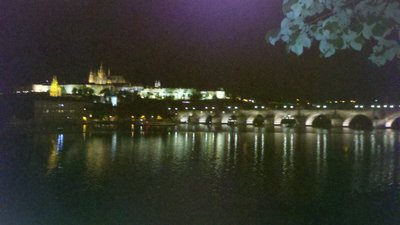 More Tickets for Music in Europe

Before we go to Prague we will go to Salzburg then Vienna, all this after visiting friends but that is another blog.

I found a dinner concert at the St. Peters Abby which looks good but touristy. It takes place in one of the oldest restaurants in Europe with music of Mozart. I still haven’t bought tickets just because I’m not sure it is what we want to do. The books say it is in the famous Baroque Hall but I can’t find any information about this hall and why it is famous.

There is also the same type, dinner/concert in Vienna and I’d thought that it would be fun to attend in the castle where Mozart actually played but now I’m afraid that it will just be too touristy.

We did pick up tickets for the Opera in Vienna. We decided that we’d try to get tickets and I went to a site in English but there were only 2 tickets, each nearly $200. We talked and talked but then I decided to search some more before purchasing. I then found 4 left for the date we could go; 2 in the highest price range and 2 in the 3rd. This entire site was in German so we had to guess at lots of words and did look some up on a translator site. At least I think that we got them as we couldn’t read everything. Once I picked the tickets up I went back and there were none but we think that we got them. We also bought tickets for a concert at the Concert-house and tickets to hear the Requiem at St. Charles Church.

As for hotels, they were going fast. I used the same technic I’d used for Prague; Frommer and tripadvisor.com for reviews then reviewing the maps for actual locations in relation to event locations. This took lots of time but I think that we have hotels in very central locations within walking distance to many events. But even as I was getting the rooms I picked up the last rooms at one hotel. I used hotels.com so after the trip we will have earned some free nights.

The tickets for Barber of Seville arrived so now the trip is becoming a reality.