Back to New Mexico

Several months ago, our daughter-in-law, Jen suggested that we spend Thanksgiving in Taos. She’d never been to Taos but heard us speak of it plenty. She then found the El Monte Resort and it looked like a nice place to stay and play. We reserved rooms for our 2 families.

After flying most of the day we finally arrived in Taos after 11pm. We got into our room, a small casita, the equivalent of a small cabin but New Mexico style.

We’d brought a bottle of wine and a pumpkin pie dessert from home. Those were perfect for winding down in our living room. We got the fire going and relaxed.

We had to meet Clayton and Jen early as they had to drive to Santa Fe for a cooking class we’d given them for a present. We meet at the restaurant at the resort, but as I suspected it would be, there was nothing I could eat. That was fine, the Taos Diner was only a 15-minute walk and they have most everything New Mexican gluten free.

We got the grandkids all bundled up and walked to the Taos Diner. It took a little longer with Fynn stopping to have a conversation with himself periodically. 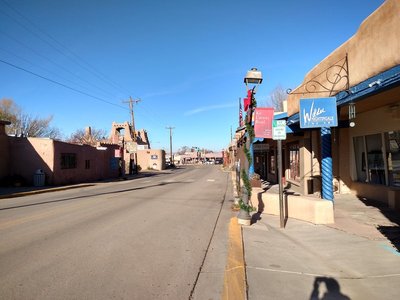 After a good filling breakfast, we walked to the Plaza. Kids were not interested in the history, rather it was more fun to play tag and a sort of hide and seek tag game. Dale and I took turns running around with the kids. 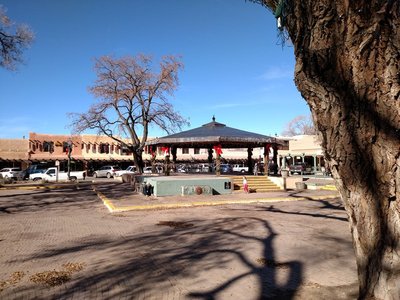 After some pool play back at the resort, we took the kids to Orlando’s for dinner, another Taos favorite of ours. We were able to introduce the kids to real chili sauce, pure from the dried pods. I need to learn how to make a sauce like this.