The End of a Road Trip

Alas, the end of one trip so we can pack for another.

We’d originally planned to go from Hovenweep on to Arches, Capital Reef, Monument Valley and then home. We had wanted to visit more parks in Utah then got the idea for these from an article I saw.

We have been to several of the parks listed in the article and, although, we’d love to go back, knew that we’d have little time now.

Dale and I sat down during a rest stop break and mapped out what we could actually do considering the time we can spend on our way home. Oops, there went Arches and Capital Reef, chopped. That left Monument for a day, which is west of Hovenweep.

We decided that due to the high winds we’d take a safer route home and skip the rest of the parks. As we drove down the hill into Albuquerque that evening, we remembered why we loved that city. But also laughed as we will be flying there in only a few days.

Time to get home, unpack this rig and pack up for our trip next week.

Hovenweep For A Day

Hovenweep is part of the Canyon of the Ancients, located at the end of the canyon. The canyon is very narrow at the bottom and not much elevation gain between the bottom and the top. Nevertheless, the Ancient Ones built structures around the edges and in the bottom.

https://www.nps.gov/hove/index.htm
We really like Hovenweep because it is an easy 8-mile walk down around and back up to the campgrounds. While you can’t enter the structures it is easy to get up and close as the barriers are not set back very far. And like Mesa Verde, the ruins are from the similar people, but here there are not the tourists. We only saw 6 other people during our entire walk. 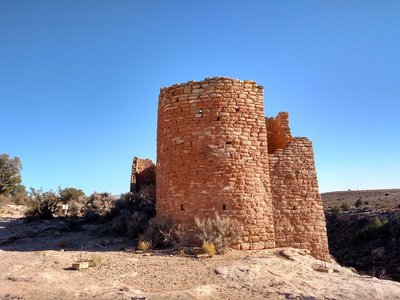 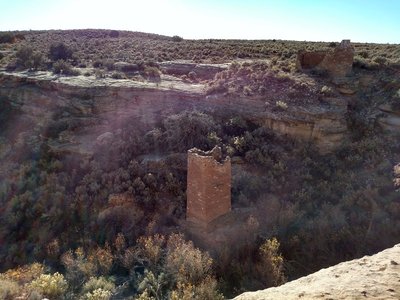 While we are not religious, it is a place that is very spiritual to us. To be so close to those who came before us, and to experience seeing structures built on sheer rock walls or small outcroppings is a source of amazement.

We were at Hovenweep as part of a grandkids trip about 10 years ago. We’d taken the 4 older kids to Mesa Verde for part of the 100-year anniversary and then heard of Hovenweep. We fell in love with Hovenweep so it was easy to combine this with our road trip.

This time, being alone, we packed up a picnic, very simple sandwich makings, veges and hummus, and white wine. Dale found us a nice flat rock to spread out the lunch and then we found a place in front of the “Twin Towers” to enjoy lunch and the canyon. Having simple food and a simple wine was fitting to the area. 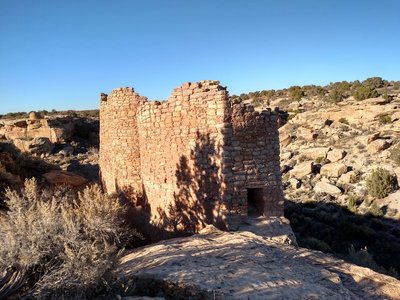 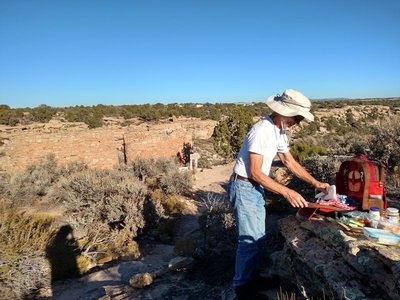 The sky was blue, not a cloud, and the air crisp and cool. We couldn’t ask for a better day.

Enjoying the canyon between the storms

It rained all night with thunder and lightning. The thunder went on and on sometimes not stopping, just continuous. We could only imagine what was going on, on the trail and hoped our kids were not getting soaked.

The rain let up some so we packed up a picnic lunch complete with wine and tablecloths. We thought we’d have a picnic at Zumwalt Meadow. 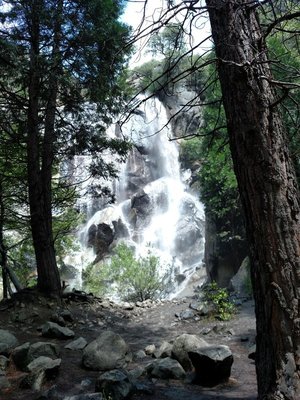 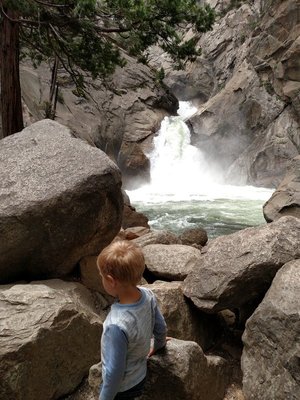 After a stop at Grizzly Falls, and then Roaring River Falls, we drove east to the Meadow. Of course, as we carried our picnic to a table it started to rain. As we carried everything back to our truck it started really raining. It was time for a picnic in the RV. 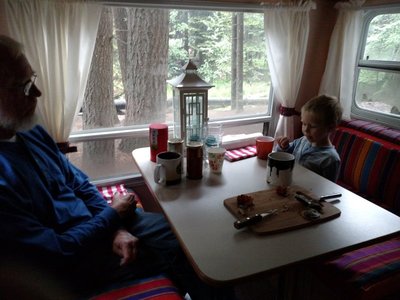 Late in the afternoon, when the rain had stopped, we headed back to the Meadow for a little hike. It was cool but at least not raining.
As we started to walk we hoped that we’d see the boys if they came out of the mountains.

We took the loop trail around the meadow. It is mostly unpaved and partly thru rocks. Emilio was able to walk the entire way. When a deer headed down the rocky steps toward us, Emilio got a little frightened, but then the deer ran away. 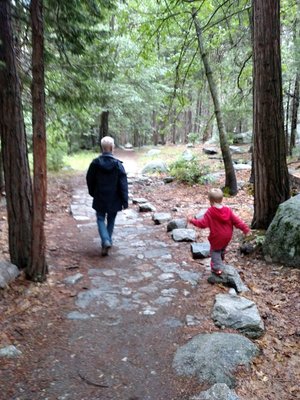 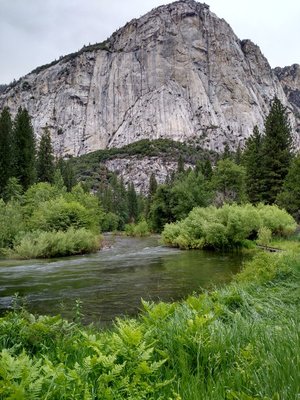 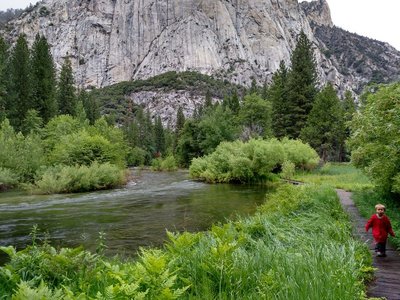 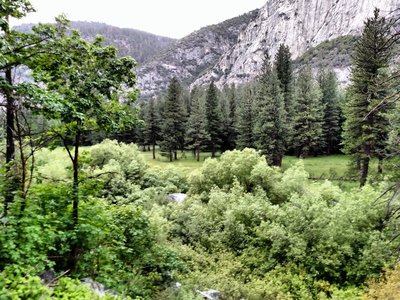 As we were heading back to our truck we saw Justin’s truck pull into the Meadow parking lot. They’d been rained out. Turns out that everything they had was soaked, there was no way they could spend another night on the trail.

Our intuition was correct, and fortunately, we’d planned for a large dinner and sleeping for all. But we were so happy and relieved to have our kids back.

Camping in the weather

The reason we came to Kings Canyon was to leave Justin’s truck at the End of the Road. This is literally the end of the road and one can only hike out from here. There is a small Backcountry Ranger Station where people can obtain last minute backpack permits, or find out weather reports, or discuss various trails with a ranger. 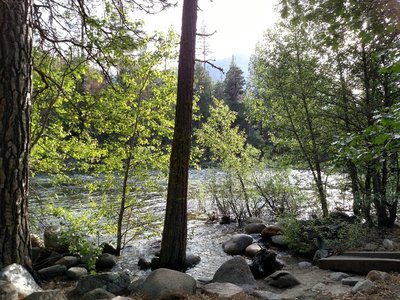 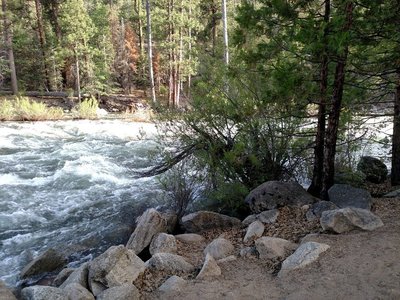 On the drive up to Kings Canyon, I’d listened to our local Public Radio station. They had a forecast of rain in the mountains and snow at the passes. I was a little concerned for the kids.

A guy in the campsite next to us stopped me and said he’d just been at the village store and saw that the weather was going to close in. I began to get more concerned about kids. 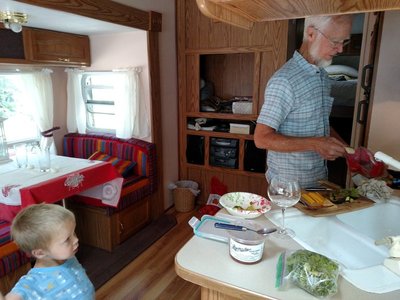 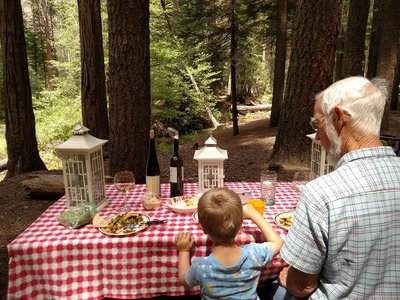 The Village Store is the only place in the park where there is internet, not fast internet at all, but at least a place where one can send and receive emails, contact with the outside world. The internet is so slow that to get into a blog site, it might take 5 minutes just to load the first page. There is no cell phone service so there are no texts or hot spots.

We went by the Village Store to check emails and correspond with kids and grandkids, answering some questions that they’d had. Then we drove back up to the hikers’ parking lot. A space had opened up right in front so we re-parked Justin’s truck.

It is raining off and on and it appears that there is some weather going on in the direction of the trail the kids are on. But we are snug in our RV. 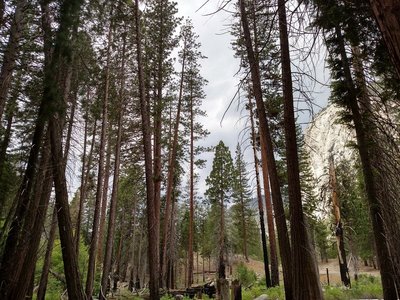 A Bit of Luck In Kings Canyon

Settling in at Kings Canyon

We got home by 9pm, picked up some dinner and ate. After doing 3 loads of laundry, dishes, and packing up items we’d forgotten, we got to bed by 1am then up again at 5:30am. We were on the road by 6:30am, an early start to Kings Canyon.

Dale drove our truck and pulled the RV while I drove Justin’s truck. The plan was that I’d drive faster and get a campsite while Dale drove more slowly up the hills. He also had Emilio along, who talked and sang loudly the entire time.

I drove down to the Ranger Station down by the village store and stopped to inquire where we’d be likely to find a campsite and what we should do. I was also very concerned about Dale driving the truck and the possibility that he’d forget and shut down the motor after the long pass.

The Visitor’s Center/Ranger Station is very small, but a bunch of people had just exited so I was glad to find that I was the only one who needed to speak with the ranger. A couple of people were looking at the items for sale. I explained to the ranger that my husband was a bit behind me with our 5th wheel, but we needed to camp and was there anywhere for overflow or anything.

The ranger told me that Sheep Camp was closed, but….. Sheep Camp was still closed but…… I asked if I should wait and she said I might want to. The ranger then gave me a map of Sheep Camp and pointed out pull-thru campsites that would work well for us.

I drove down to Sheep Camp and the gate was still closed. I then drove back to the open campground and it was packed with people. There wasn’t a single space for us. I then drove back to Sheep Camp, the gate was closed but a guy in a small truck was parked just off the road at the turn into Sheep Camp. I asked him if he was waiting for it to open and he said yes. He asked me if it was my impression that the campground would open and I told him that it was what I read into the ranger’s answer.

The guy in the small truck pulled up closer to the turn in and I parked right behind him. About 5 min later, rangers drove up from inside the campground and unlocked the gate. I drove right to the pull-thru site, by the river, where our slide out would face the river. I put 2 chairs out and drove up to secure the site. Fortunately, there were only the 2 of us in the campground so I didn’t need to worry about someone taking it. 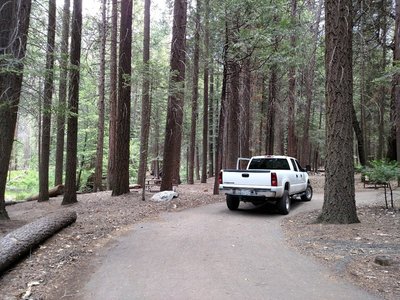 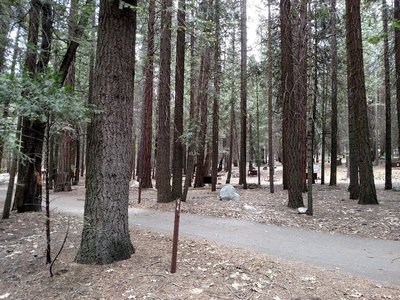 I pulled around and started to get out of the truck to get the payment envelope. The other guy was there and we were talking briefly. I’d just told him that I didn’t know the license plate # of my truck. I said that my husband should be coming up the road soon, I turned and looked at the road and there was Dale driving up the road. 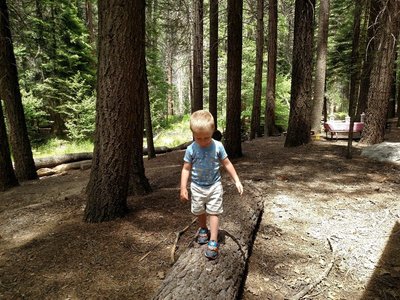 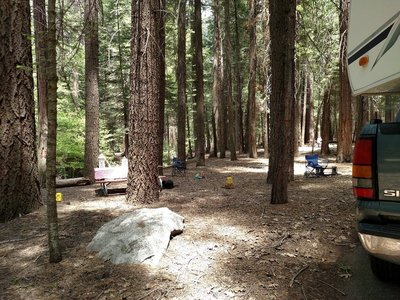 I laid into the horn on Justin’s truck but couldn’t tell if Dale saw me or not. But within minutes, Dale had found a place to make a U-turn and he came into the campground. I led him to our campsite and we were feeling quite smug.