Kids woke up early and got dressed quickly. They were not going to miss out on another breakfast at the Bryce Canyon Lodge. And we did make it in time.

We have been spoiled by the lodges in the National Parks: El Tovar at the South Rim of the Grand Canyon, Crater Lake Lodge, Princess Lodge in Alaska, Old Faithful Lodge in Yellowstone, Many Glacier Hotel in Glacier National Park and Banff Springs Hotel in Canada. We have not stayed at most of these hotels, only had meals. The Bryce Canyon Lodge was good but not in the same league as the other lodges. It was fun, and kids were impressed but to us, well, we expected more.

We went back to the RV, changed clothes then hopped onto the shuttle to walk the rim walk. The rim walk is a partially paved walk that extends from the hotel to the campgrounds. Note that there are no handrails except at the lookouts. 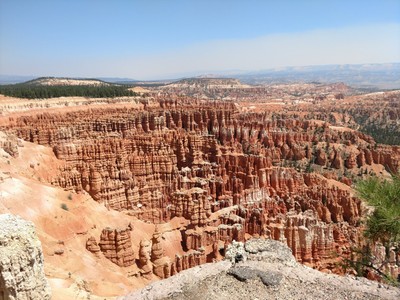 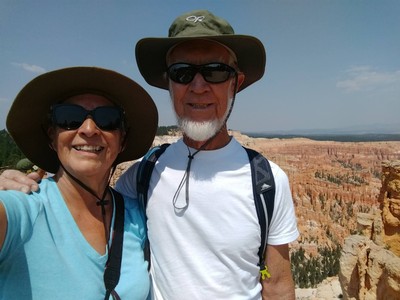 We walked from the hotel but only made it to Sunrise point where we caught a shuttle back to the RV. We drank nearly all of our water and as it was getting quite warm out and water was not available for about another mile we cut the walk short at 1.5 miles. 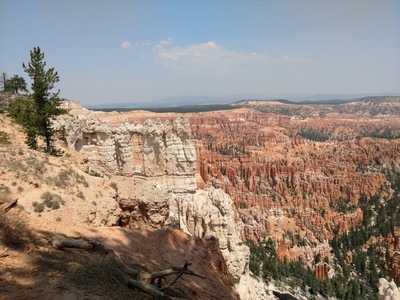 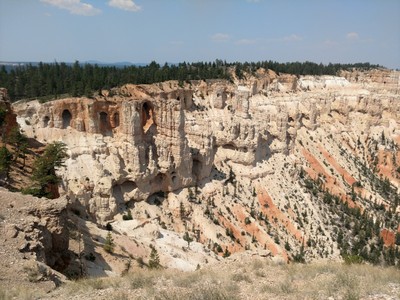 Along the trail were many beautiful views of the canyon. In a forested area, kids stopped to play on downed trees. They stopped to count the rings of one tree and Lucian gave a little lesson on reading the life of the tree. Kids then looked for bugs under the bark of the downed trees, jumped and played. 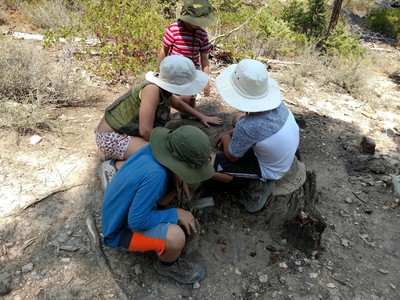 We stopped for last-minute souvenirs, then packed up the RV and started for home. Another successful grandkids trip completed.

We took the grandkids for a hike thru the hoodoos

We’d planned to leave early for Bryce Canyon, to beat the heat over the steep stretches of Hwy 191. Of course, we didn’t pack anything after our campfire dessert and didn’t wake up early.

The trip to Bryce took about 8 hours, including bathroom stops and a lunch stop. We did beat the worst of the heat and the stretch south has a shorter uphill, but the downhill is steep and long. Best to let the engine do the braking if possible.

We didn’t have a campsite reservation at Bryce Canyon and were a little concerned, however, there were many sites available. Many sites are sloped but most in Loop A are a pull thru making it easy to park.

After running amok, the grandkids settled in for the evening.

Wednesday morning all of us slept in late. Grandkids ran, hiking up to the top of a hill. They ran back yelling that they saw the entire canyon. They had found the rim trail.

We were really tired of being on the road so it was nice to stay put while kids made up games like “hit the rock across the picnic table with sticks, making mud structures, and playing walking talkie. Fortunately, we were within walking distance to the Visitor’s Center, so picked up Jr. Ranger books, and watched the movie.

We ate breakfast at the RV and then hopped on the shuttle to Sunset Point for our hike. The hike we wanted to take the kids on was the Navajo loop taking the cutoff at the bottom to the Wall Street trail. We’d read to hike counterclockwise but the aide at the top of the trail recommend hiking clockwise. As we walked down the trail we saw that the Navajo trail was steep and in the sun. We were glad that we’d checked beforehand as the Wall Street was much shadier and had a breeze. Several people hiking up the Navajo trail were in trouble with the heat and sun. 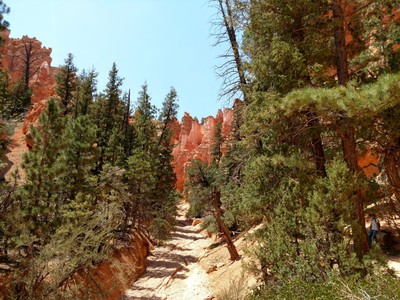 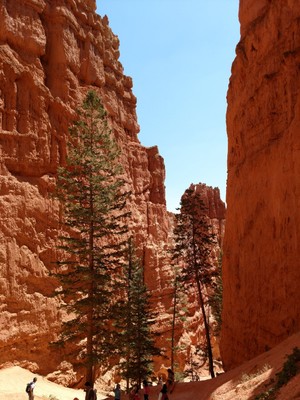 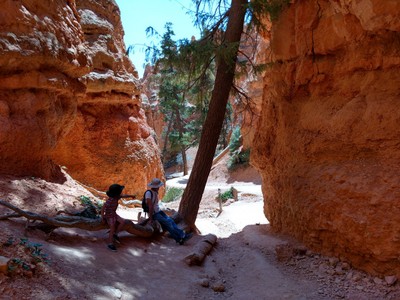 Kids ran down then up the 1.5-mile of trails, but I hoped they looked around at the beautiful hoodoos. Hopefully, they will remember this trip for its unique beauty.

A Hike Into Mug House

Hiking into the Mesa Verde ruins

With the cooking class over it was time to move on to Mesa Verde.

In 2006 my dad, who was still with us, told me about 2 hikes that had opened up, one being to Mug House. We’d planned a grandkids trip with our 6,8,9 and 10-year old grandkids to the southwest so Mesa Verde was on the way. We bought tickets for the hikes and on we went. Unfortunately, I was using a small point and shoot and the camera card crashed after our trip so any photos, good or bad, were lost.

Several weeks ago, we were in Great Basin on a grandkids trip when I ran into retired rangers. As we were talking they mentioned that the trip to Mug House had just opened for tours but was only taking a few people down and it wouldn’t last long. I immediately got online and found that it was open for tours, 10 people per tour, 3 days a week for a few weeks. We were there!

The drive to Mesa Verde was an afternoon drive, arriving in the early evening. We found a site in the campground and set up camp. We not only had reservations for a hike on Fri a.m. but an evening hike on Sunday for sunset.

The drive from the campground to the mesa, where several ruins are, takes about 45 minutes. The road follows hills and the tops of mesas. There are lookouts high on the hills that overlook the cities below.

The hike into Mug House is only open with a ranger-led hike. The hike itself is about 3 miles round trip, nearly straight down the hill, over boulders and rocks. At 7,000’ elevation, the hike back up is a scramble that will leave one breathless. 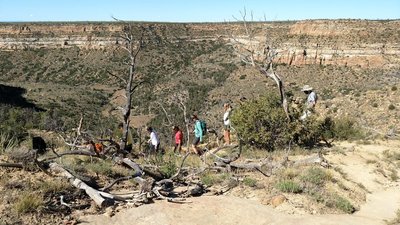 Mug House itself was amazing again. The ranger who led the hike was an archeologist so she pointed out items that we would have missed; slight differences between building bricks, residue paint inside rooms and windows used as doors. 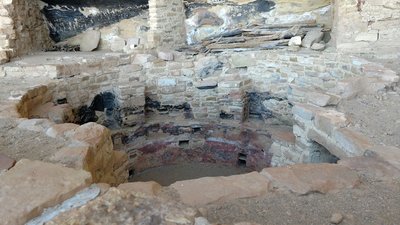 A small step ladder was onsite so that we could view, up close, the areas inside the ruins along the wall. We could note the designs still visible around the bottom of the kiva. 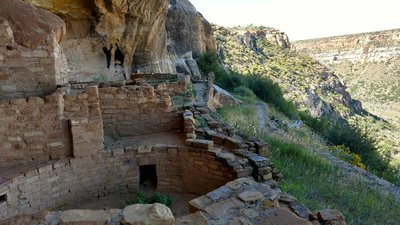 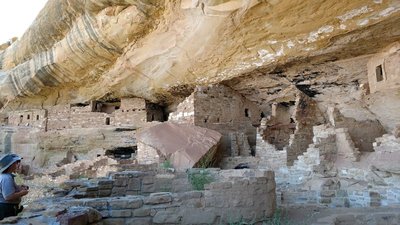 I was able to hang behind and shoot lots of photos while communing with the ancient ones.

Road Trip to The California-Mexico Border

Before leaving for Oregon I applied for Global Entry passes for Dale and I. When we travel for work I usually carry lots of equipment and it is always a worry when I get stuck in security and my equipment goes on down the line. We also hate the lines in security.

We’d hoped to go thru the interview process in San Francisco or Portland but there were no interview openings until July and August. We got our Conditional Approval while we were at the South Beach. I looked again for interview openings but when there was nothing in Northern CA, I secured interview appointments down in El Centro for Wed afternoon.

Our plan was to go to El Centro via Anza Borrego on Tues, then drive to El Centro for the night. On Wed, we would go to our interview then return home thru Joshua Tree. We’ve been wanting to go thru these 2 parks for several years so this would be a good excuse.

We arrived home from Northern Cali on Monday, repacked and left again on Tues morning. We’d planned to take our RV but then last minute decided to leave the RV at home and hotel it.

The drive down to Anza Borrego was beautiful. We were surprised and wished we were in a sports car instead of our truck. We could imagine driving on the 2 lane roads winding thru the hills, flying low! Someday. 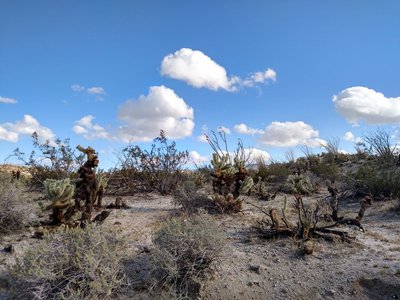 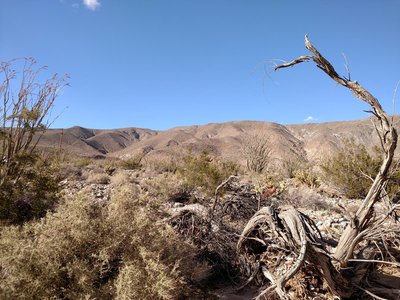 We were so surprised in Anza Borrego. There were so many flowers, so much green. http://www.parks.ca.gov/?page_id=638 I had Dale to stop several times for photos.

We made it down to El Centro and after checking into the hotel got a recommendation to eat at D’poly. As it turns out there are 2 restaurants, one a taqueria. We went to the taqueria, as recommended. A little place but great food.

We made our interview and it was as others had posted, simple and quick. We were out in about 15 minutes. Now we had to wait for our passports to be linked.

We started for home but had to have another meal at D’poly, this time, the restaurant. Again the restaurant was hardly larger than the taqueria and food was so good. Dale was the only non-Hispanic in the place.

We drove home via Joshua Tree. https://www.nps.gov/jotr/index.htm. We were under pressure to get home but stopped at several pull outs in the park. The cactus were beautiful and unusual. At the last pull out I stopped to shoot photos of some rocks. As I was shooting I realized there were Big Horn sheep running around the rocks. I’d read that it is unusual to see them. 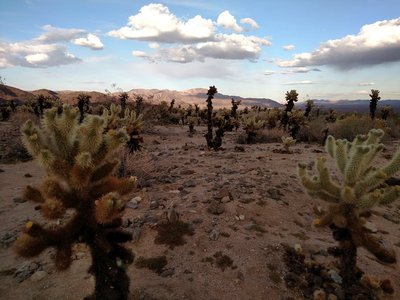 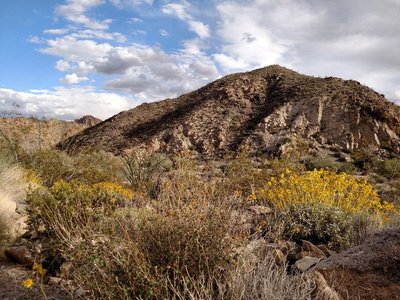 Nearly too late I remembered my telephoto lens, I ran back to get the lens but then only got one photo. This was a sad lesson on why I need to carry all this stuff, even when it is across a road.

We will return to both Anza Borrego and Joshua Tree, hopefully, next spring. Next time we will camp in the RV for several days at each place.

Now for our next trip.

Champagne Brunch in the Superbloom

Enjoying the superbloom in Death Valley

So we have been to Death Valley for trip #2. This was to salvage the day to shoot photos and have a champagne breakfast among the wildflowers.
For those who are unfamiliar with Death Valley and its affairs, this year is the wildflower “Superbloom”.
http://www.nps.gov/deva/learn/nature/wildflower-update-2016.htm We saw wildflowers several years ago, but, wanted to see the more spectacular show.

We got to Death Valley by 8pm Sat night, and found our rv in order, fridge cold, everything waiting for us. We arrived in time to prepare a dinner of sausages, Brussel sprouts and salad. The campground host came by to make sure it was Dale and I in the RV.

This morning we woke up early, before 6am. The sun was coming up over the mountains to the east. We quickly packed up our champagne, eggs, potatoes, Canadian bacon, and things to cook with. We packed all of that plus our picnic basket and picnic backpack into the truck and too off for the Badwater area.

Furnace Creek is east of Stovepipe Wells and Badwater is beyond that, about a 40 minute drive from Stovepipe. And, by the way, there is cell service around Furnace Creek. Enough service to post a photo or 2 on facebook.

We drove past Badwater, and sure enough, found huge fields of wildflowers. We found 6 different types of flowers. The hills were full of bright yellow flowers but many of the smaller flowers were in the washes. 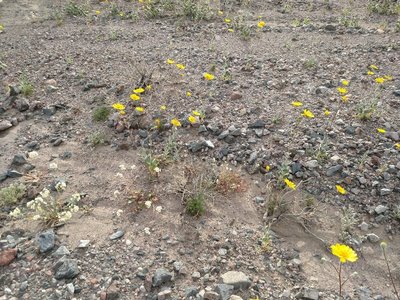 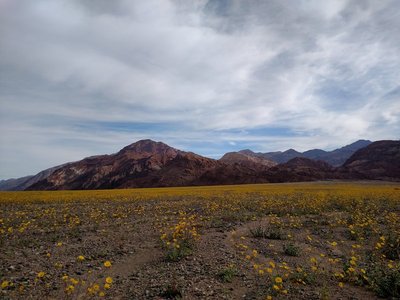 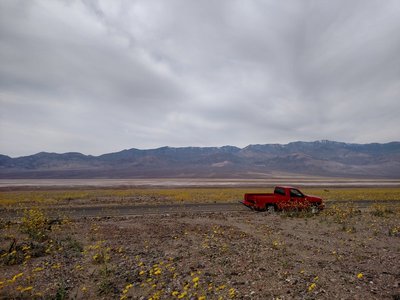 We set up our table, poured champagne and toasted. This was exactly where we’d hoped to be. 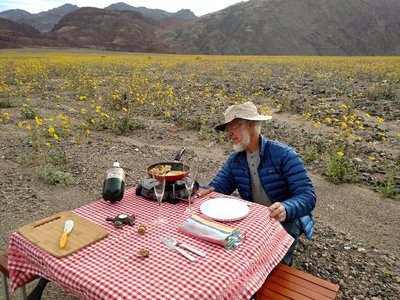 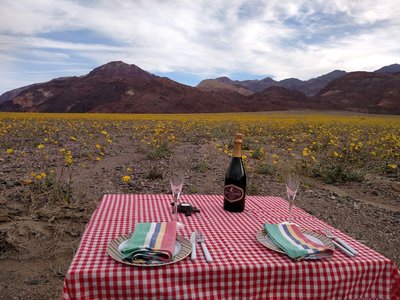 Now we will return home to get our truck fixed. We will then return once more to Death Valley to pick up our RV. Hopefully, we can bring some grandkids along for this final trip.