The Road to the Top of the World

Driving the Trail Ridge Road thru the Rockies 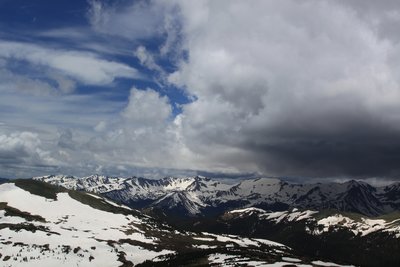 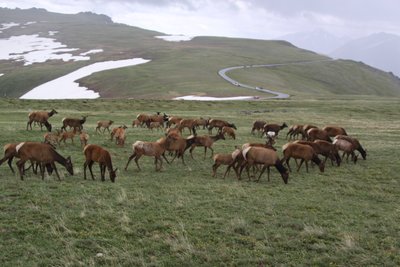 A road goes nearly around Rocky Mountain National Park that starts down in Boulder, thru Estes Park and then over a 12,000+ summit and onto the west side. The road, at 12,000 looks down onto most peaks full of snow and glaciers.

We thought that we’d drive up to the Alpine Visitor’s Center just past the summit on our last day in the Rockies. A plus is that part way up is a Junior Ranger Headquarters and Christabel could get her Jr. Ranger Badge here.

We started out and it is a drive that I highly recommend. Near the summit the road is above tree line and mountains are visible to the west. It is amazing to look down onto mountains that look so high from Denver and see the peaks.

Herds of Elk were at the top where we also encountered snow and hail then pouring rain. A visitor’s center has exhibits on building the road and a few other things, it is small but the gift shop next door is huge with lots of stuff and a café. We were able to eat our picnic lunch in the café without being bothered which was nice that we were not forced to purchase something.

Upon our return to Granite Basin we hopped on a free shuttle bus just to ride around once. We got off at Bear Lake and were going to walk around the lake but mosquitos were so bad we found the first shuttle bus out and hopped on it.

Time to pack up for the drive to Taos.

Our hike to Sprague Lake in the Rockies 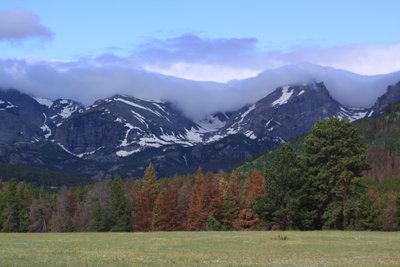 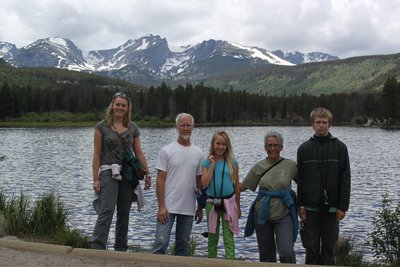 Waking up in Rocky Mountain National Park is a wondrous thing. The Glacier Basin is surrounded by mountains so clouds are over some with other peaks visible. The basin campground has campsites are on ½ of the area with a large glassy area around the entry. A river runs along one end of the campground from the mountains on thru the valley.

Kids woke up and informed me that they had already had 2 hikes, one just after I left and one yesterday. They really wanted for us to go back to Sprague Lake a 1-1/2 mile hike each way. This sounded great as I’d been sitting for way too many hours.

We packed up a picnic lunch complete with tablecloth, wine, cheese, meat and breads in our picnic backpack and took off for the lake. On the way the kids pointed to the general area that a hawk is protecting, swooping at passersby. The hawk had been busy dive bombing another person when they went thru so that the hawk ignored them as they passed.

The hike is so scenic but then it is in the Rockies. A stream runs along most of the trail all the way up to the lake.

As we were hiking along and talking 4 kids emerged from the forest on the other side of the stream. They asked if we knew how to get to Sprague Lake and we said yes that the kids had been there already and were leading us. They asked if they could come along, they had been hiking and had taken a wrong turn and had gotten lost. We had the 4 new kids join our group and they told us everything we ever needed to know about them on the way up.

When we got to the top the lost kids found their parents, we took photos of the lake and then our kids found the perfect picnic spot where we spread out our picnic lunch.

Now to the Rockies

Camping in the Colorado Rocky Mountains

We’d planned to spend 3 days in Rocky National Park but having never been there before were unsure of what exactly we would do. Then in Minnesota, Crawford called asking me to please attend a workshop in Dallas, they would pay all expenses. This would occur during our Rocky Mt. time. I thought that Dale and the kids could still enjoy the mountains and I could make a quick trip from Denver.

When we got into the park we found that all of the National Park campgrounds were full except one another hour away with a pass of 12,000’. We found a private campground nearby instead for the night.

Early in the morning Dale and I got up and went to Glacier Basin, the one nearby campground that takes campers on a stand-by basis. We got to the campground by 7a.m. and got on the list and by 7:30 we had a site for the night. We assured the ranger that we were flexible we just wanted to stay for 3 nights.

Dale and I drove back to the private campground where we’d left the RV with kids sleeping, packed it up and went back to Glacier Basin. When we arrived the ranger had a different site for us, one that was open for 7 days so that we would not need to change sites during our visit.

We sat up camp then Dale and I took off for Denver so that I could catch my plane. Since we were concerned about him being gone so long from the kids he dropped me off at the curbside.

I became concerned about Dale when, an hour or so later, a huge thunderstorm hit the area. It was lightning right at the airport so that no flights could take off or land. 3 hours later the storm finally moved off of the airport and planes could take off. The airport was jam packed with people and they were practically pushing the people onto the planes. Finally after midnight I got into my hotel room in Dallas.