A Road Trip From Sacramento to Death Valley

Another day, another road trip

I had to be in Sacramento for a FEMA workshop so thought that that it could be made into a road trip. Our thought was to go from Sac thru South Lake Tahoe, having a good lunch at the buffet in Harrah’s. Then go over to Hwy 395 and drive to the rest stop near Lone Pine. On Friday, we’d head to Death Valley to shoot photos of the wildflowers.

We have friends in Sac and really wanted to see them so 1st we got messages to 3 of them. One couldn’t see us until Wed night, John, and he invited us for dinner. It worked out to see the others on Tues, so we arranged to have a dinner party at the RV site.

The dinner party was a little chaotic as we didn’t arrive at the campground until after 5pm and friends came soon after. But we hadn’t seen each other in ages and all chaos was ignored. One friend, Julie, had recently married so we got to meet her new husband. The other woman, April, was friends with our boys in high school. We’ve kept in touch so we got to meet her 2 youngest kids. The kids are similar in age to 2 of our youngest grandkids so we were glad to have fun with them. And it was great to sit and talk with her and to see how she has changed into a woman.

My workshop was on Wed and that night was when we went to see our other friend. He has been a family friend since I started at State Farm in 1990. He is the one I can go to with any issue and he has been like an uncle to all 3 of our boys. It was fun to have dinner and just sit and talk for a while.

On Thurs, we arrived at Harrah’s starving and mouths set for the buffet. Unfortunately, the buffet was closed until 5pm so we ate at the American River which is a fun restaurant in the lower level of the casino. There is a waterfall and little river running thru the restaurant so that it feels more outdoorsy.

From Harrah’s we took a shortcut road to the 395, which was steep down into the valley, but amazingly beautiful. I don’t know if it was shorter but it was nice to take a new road. 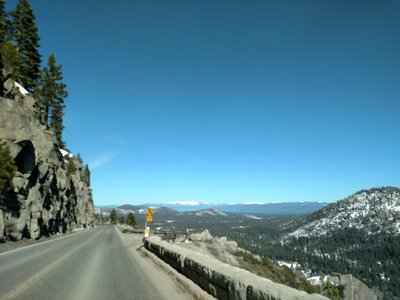 For those who don’t know the Hwy 395, it is a road that runs north and south in the state of CA. It runs on the east side of the sierras. The Death Valley is east of 395, hence the need to get over to that side of California.

395 is the road one takes to ski Mammoth, but north of Mammoth is Mono Lake. This lake is beautiful with tufa's rising from the waters.. http://www.monocounty.org/mono-lake/

We saw Mono Lake from a vista point as we were driving down the mountain. It was a nice overview of the entire lake with mountains in the background. I shot some photos but hesitated to get the tripod out, regretting it for a bit later. But I wanted to get on down the road and was thinking about sunset photos that might be nice along the way. 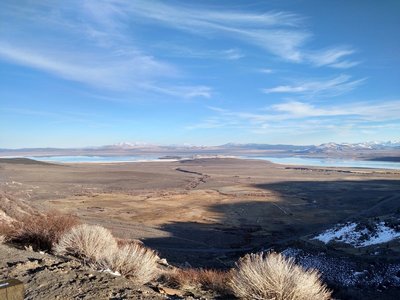 Once down the mountain, the 395 goes right by Mono Lake. I was watching the lake but just wasn’t seeing what would make a good photo and told Dale that maybe I’d keep driving. But then at the south end of the lake, at the Visitor Center, I looked back and saw what I’d wanted to shoot. I quickly parked, grabbed the camera and tripod and ran for a good place to shoot. I was the only person around, just the wind, the lake and my camera. 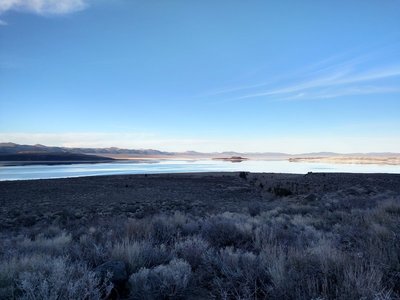 Now on to Death Valley.