An old photo, a favorite restaurant are connected

So much travel, back and forth across the country. Work, work, work.

In between the storms are down times. Fortunately, we are in a down time now and have a chance to catch our breath. Last year’s storm season lasted nearly the entire year. 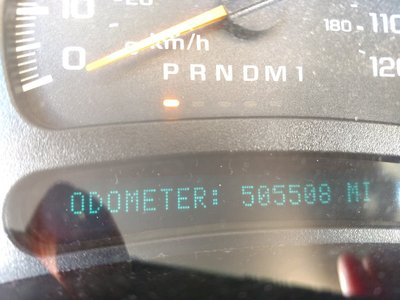 We packed up last week and drove to San Antonio, the site of this year’s Crawford Catastrophe Conference. I don’t go every year and wasn’t going to attend this year, but had to fulfill a promise. I’d promised a friend that I’d go to the conference and introduce her to everyone I know. Hopefully, that will prove to be more of a help rather than a hindrance.

We thought that since we would be in San Antonio, we’d combine it with seeing relatives in Oklahoma, food in Taos and Santa Fe, and shopping for an American Indian rug for a wall hanging. Our grandson said that the trip would actually consist of us waddling from one meal to the next. Out of the mouth of babes……

San Antonio has many ties for my family. My father was born and lived his early years here. My grandparents were married in the San Fernando Cathedral. My grandmother and my father were baptized in the Cathedral.

My grandfather told us that he had worked in the basement of what is now Mi Tierra’s restaurant when the building was part of Produce Row. We have a photo from those years with my grandfather, 2 uncles and my dad in front of his truck.

In Nov 2016 Dale and I had dinner at Mi Tierra’s. I told the waitress about my grandfather. Soon a supervisor came to our table and asked to hear about him. I told her what I could, that he had worked with the bananas and he had told us that it was in their basement. She, Myra, verified that Mi Tierra’s actually had a basement and it was used for produce in the early years. She asked for a copy of my photo.

On Wednesday, I emailed Myra letting her know that we were in town and had the photo and that we would go to Mi Tierra’s with the photo. We went to the Cathedral to shoot a few more photos, then walked on the River Walk, then walked to Mi Tierra’s. Myra wasn’t in yet but the staff was aware of our mission. We had margaritas while waiting. 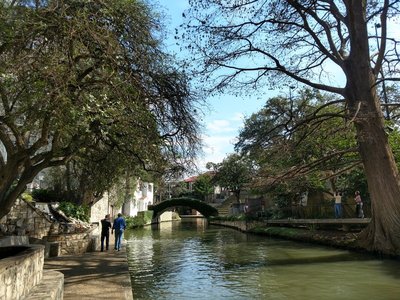 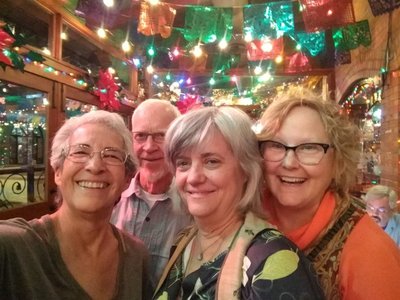 Then Myra showed up at our table, she remembered us and even the table we’d been sitting at over a year ago when she heard the story of my grandfather. I presented to photo to her and she appeared to love it. She said another person had already ordered a frame and that she would send a photo of its location on the wall. 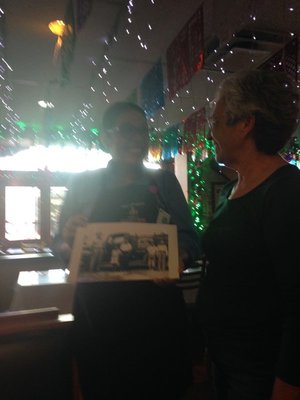 I was so happy to have my family recognized, I only wish my father could have been there. We ate at Mi Tierra’s so many times but never connected to the right person there. But the photo has found a home.