A Day In Yellowstone

We did arrive in Yellowstone but not when we wanted, it was late in the evening and the park campgrounds were full. I should have guessed that the campgrounds would be full before leaving but I had no time to think about this trip so I was just hoping that our luck would hold out.

We looked for a campground in West Yellowstone but everything was full so ended up driving back west to something a little further out where we snagged the last site. Looked like lots of people were in the same situation.

It was Christabel’s turn to make dinner and she had chosen to make French toast and crumbled sausage. We’d found some fresh gluten free bread at Whole Foods so I was able to eat with everyone.

By the time we’d parked in our site we were all a little cross; it was 10pm and we were all tired and hungry. Bel and I started getting her ingredients out when Charlotte asked if she could help. Bel said yes so I ducked out of the way. Charlotte and Bel mad wonderful French toast together, consulting each other over various steps. This is really what makes our trips so great, the time together and the bonds that form.

We knew that we wouldn’t have lots of time in Yellowstone but thought that if we could leave by 5pm we’d get into the reunion in time. NOT!!! Why didn’t I think this thru? 1st of all when we get into National Parks Christabel loves to get her Junior Ranger designation and it was no different here. Getting this badge takes time so we spent several hours doing this and Charlotte joined her.

We did see Old Faithful erupt several times and sat on the veranda at the lodge people watching and geyser watching while girls finished badge projects. When they were finished and had taken the Junior Ranger Oath we got back to the RV for a picnic lunch. We wanted to do a walk but then couldn’t find the spot called Morning glory Pool. I looked at maps and decided that Mammoth Falls would be interesting and since it is at the north exit, the exit we needed to take it seemed like a good choice.

If you have never been to Mammoth Falls in Yellowstone it is a must do. There are actual falls, not large but the colors from the water make for the most amazingly beautiful scenes ever. There was a short loop we decided to take but when on the trail found that the path had been destroyed by the springs. There are several other paths but they can take up to 2 hours to walk so we just shot our photos and left the paths for another visit. 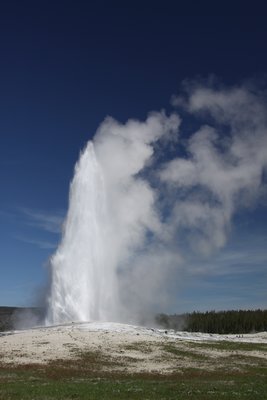 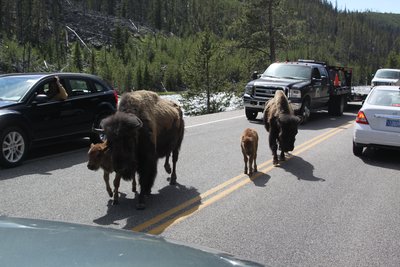