A Concert in Vienna

A concert at the world class concert house in Vienna 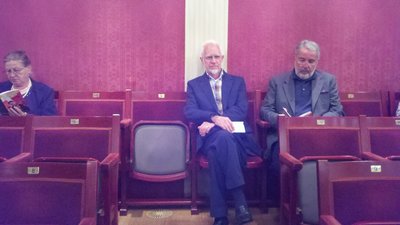 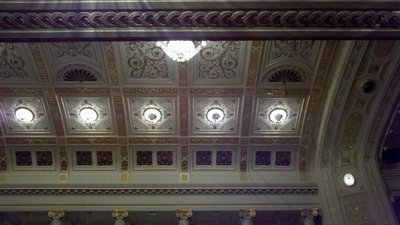 This morning was the 2nd planned concert of our trip, to hear Bach and Mahler at the Vienna Music House, one of two world class music houses supported by Vienna.

I thought that we had box seats but as it turns out we didn’t, but the seats were great anyway. The seats were along the side of the auditorium and unlike the seats in the center, each row was elevated a little higher than the one in front. We sat about 20’ from the bass instruments.

The 1st 2 pieces were Bach with a smaller ensemble that stood up to play the first one. For the 2nd piece a few more players joined and they sat, For the Mahler the full orchestra played.

We did not know what to expect for a concert in Vienna except that we had heard that the Vienna people love their music. So here we were at a concert taking place at 11a.m. on a Sunday morning to hear the Vienna Philharmonic Orchestra play.

We dressed up as best we could; Dale brought a blazer with dark blue pants that we bought from llBean and a really nice long sleeve shirt, his black shoes and socks. I brought a couple of pieces that can be used as a skirt or a dress with ties that can tie around the waist or as short sleeves. I also brought a black tank and a black knit top in the event it was cold. I also brought some comfy heels and bought some fun stockings in Salzburg that I never saw in Bakersfield.

The weather was cold, windy and rainy so I chose the red piece as a skirt with the 2 black tops layered, and my cashmere sweater under my raincoat. We were glad we’d brought the clothes we had as we only saw a couple of other people in jeans, all of the men had either suits or blazers and all of the women had dresses, skirts or nice pants with a coat.

The Music house was packed, we only saw a couple of empty seats and I remembered that I’d purchased the last 2 tickets available online on the day they became available.

The music was wonderful, the conductor was great to watch. The 1st violinist had a wonderful solo which we had never heard before. She seemed to be so young next to all the grey hairs but she was very strong in her playing.

So there were our concerts in Vienna.