A trip to St. Gilgan and the Lake Wofgangsee

Before leaving on this trip Dieter had emailed that he and Inge wanted to take us to a lake in the Bavarian Alps and do a steam train ride. We were not sure what this was all about but thought that it would likely be fun. Dieter arranged to call on the cell and ring twice when he was near the hotel and Inge would walk towards us our hotel meeting us.

Dieter drove to the lake while Dale and I enjoyed the views of lakes and mountains. He stopped at a lookout above St. Gilge 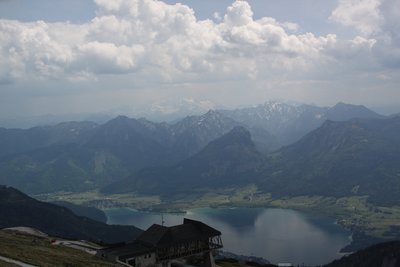 n with views of the St. Wolfgangsee, see=lake, below. Dieter’s landlord had loaned him 2 Bavarian style hats and with Dieter also wearing his new Bavarian style jacket the guys posed for a great photo while Inge and I laughed until we were crying.

We drove on to the St. Woflgangsee where Dieter suggested that we take the boat cruise to the side where we’d catch a cog train to the top of the mountain. It was warm but partly cloudy, perfect for sitting on the top deck of the boat.

The SchafbergBahn is the cog train that goes nearly straight up the steep hill with only a few twists and turns. Much of the time the rails are on the edge of the hill with wonderful views of the lake and village. The train is pushed up the mountain with an engine that appears to be tipped to the front but it works very hard to get the 3 or 4 cars up the hill.

At the top of the mountain there is a guest house with restaurant and then off to the left a small coffee house with a small selection of foods. The coffee is served on the balcony overlooking the surrounding hills, lakes and villages. We were cool but sweaters were enough.

After returning to the valley below we stepped into a salt shop as Salzburg is really a city based on Salt mining for the past 25,000 years until just recently. I would have loved to take the tour of a mine but there was no time. By then it started raining.

Dieter returned us to our hotel only to find that his car was overheating and water pouring out of the radiator. We ran to the hotel room and filled the trash can with water, running it back to him. He made it back to where they were staying, not sure that we would try that but it worked for him. 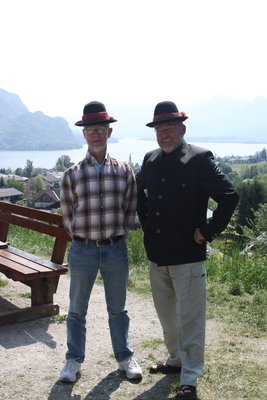