An Anniversary to Remember

What an amazing anniversary trip to Finland

I love the breakfast here; smoked salmon, herring, veggies and coffee. We will try more of these breakfasts at home

We had to get out for our reindeer safari at 10am so we had to eat breakfast sooner than later. We found that we were sharing the safari with 4 other people. The others were parents with 2 kids, a 7 and a 2-year old.

Our guide arrived, dressed in the garb of his people. We learned that he is part of the Sami, an indigenous group, located in the Lapland area. They are known for raising reindeer. https://en.wikipedia.org/wiki/Sami_people

The guide introduced us to a bit of his life. The reindeer belong to him and he is so kind to them, they are really like his children. He pets them, smiles and speaks so kindly to each reindeer. The ride itself was so beautiful, quiet except for the sled going over the snow.
We each had a reindeer skin to sit on which kept us really warm. Then nice wool blankets to cover with.

Each sled had a reindeer to pull it but all were attached to each other in a long line. The reindeer behind us kept coming over to Dale’s side and tried to lick Dale’s face on a couple of occasions. The reindeer in front is a leader in the group and the other reindeer let it eat meals first. It knew the way and would sometimes run, sometimes walk, sometimes slow way down to put his nose in the snow or grab a bit of snow. 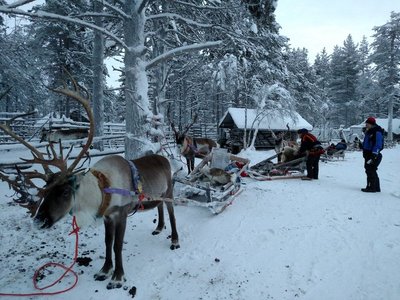 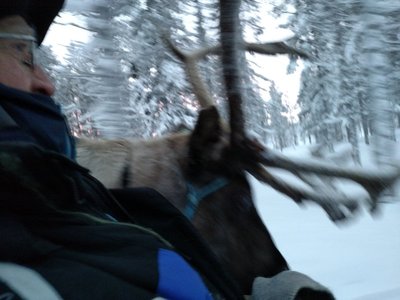 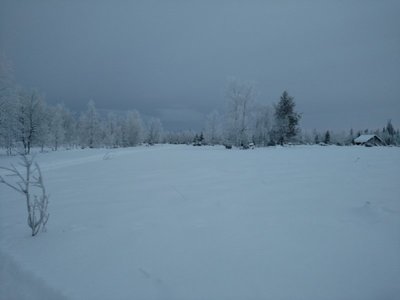 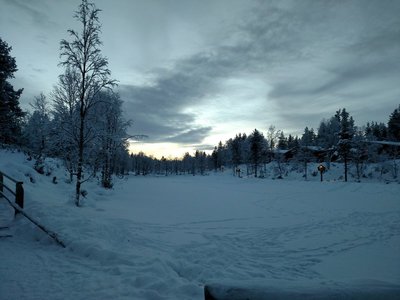 After our ride, we were invited into the guide’s tepee. This is a place where he likes to sleep in during summer months. He built a fire, served coffee, tea, and cakes, and then played a couple of songs of his people.

We had a sleigh ride scheduled for 9:45pm. We arrived at the reception desk and met our guide, then walked to the barn. The guide handed us a basket that contained a small bottle of champagne, lots of chocolates and 2 traditional wood cups. He said that we could have the champagne when we wanted.

The snow was so beautiful in the dark. Again, it was so quiet except for our sled, and again we sat on the reindeer skins.

We saw some lights in the distance, which we assumed were a house. Instead, they were lights from candles, a sort of Finnish farolito, in the snow. The guide had dug a hole then built up a wall of snow around the edge, with a hole one side leaving the top open. There were several of these candle holders. There was also a table, covered with snow, and candles. In the back, there was the structure of a tepee, only the wood, no covering.
We set our basket on the snow covered table, poured our champagne, ate some chocolate and took photos with the big camera on the tripod.

Wow, what an end to our trip!!! This has been an amazing journey.