Denali, Another Day in Paradise

I had decided that we’d take one more bus ride to Eielson so that kids could get their Jr. Ranger badge, we could hike a little and we could look at the exhibits. Also, we could maybe see more wildlife. 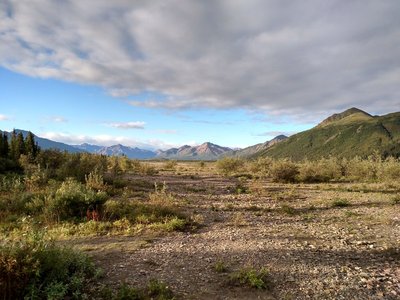 Our Tek Pass allowed us to ride any green bus as long as there was room. This proved to be a challenge and we had to wait as several buses were too full for the 5 of us to ride. After close to an hour we did get a bus ride to Eielson. The clouds moved a bit so the kids even got to see Denali. Not the whole mountain, but a sliver.

At Eielson, we sat at a picnic table overlooking the river and ate our lunch. The kids then got their Jr Ranger badges. 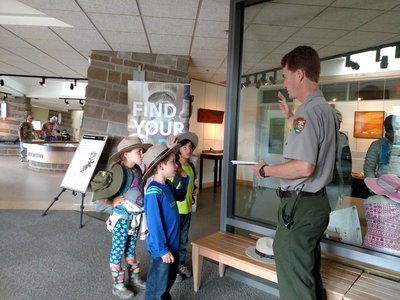 For our hike, we chose to walk down to the river. This hike was chosen by a vote. Zaya wanted to take the loop but the boys voted to go to the river. As we hiked we were told that the last part of the trail was closed as a grizzly bear was at the river. As we started walking down the kids found wild blueberry bushes. They started picking blueberries and stuffing themselves. We had to remind them to keep walking. Finally, we made it down to where the trail was closed but the bear was too difficult to see as it was walking in and out of the brush.

We started back up the trail but had a difficult time getting kids to move along. At one point Lucian laid in the blueberry bushes and just ate. They got lots of antioxidants!

By the time we got back to the Visitor Center it had started to rain plus the rangers were rounding all of us as a grizzly was headed up the hill. We stayed inside until we could board a bus back to our campsite.

Fortunately, by the time we arrived back at our campsite the rain let up and we were able to have a fire and wiener roast. 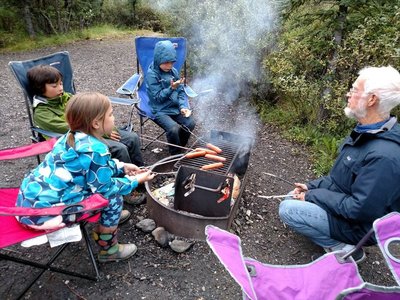 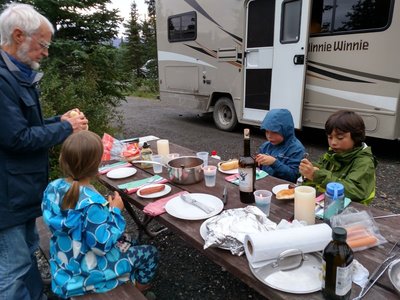