Riding Out the Storm

Storms in the life of a storm adjuster

There are some trips which are impossible to write about, maybe too emotional or not of interest for a travel blog. This trip has been each at various times. When I sat down to write the words that flowed were too emotional, hence, no blog until now.

We went to Dallas to attend a conference for Catastrophe Adjusters. This is a conference I’ve attended each spring for the past few years. After the conference, we have spent a little time with adjuster friends in Dallas and then visited family in Oklahoma.

The conference was a conference. Workshops that included the know-it-all, who asked questions that were nonsense, but he thought he was impressing all. But some good info was gleaned.

Thunderstorms and tornados were predicted while were in Dallas so I made sure that we had candles and food along in our bags. And while we didn’t lose power, we had an amazing light show of non-stop lightning. Management put a letter under every door explaining how the tornado evacuation would work. But we went to sleep and didn’t worry about a thing.

I’ve been through storms, while working storms before, and I reflected on some of them during the storm in Dallas:

- Cleveland area: I was working flooded basements when tornados started forming around us. I was living in my RV, having driven alone and living outside of Cleveland. The management said that if a tornado came thru to go into the bathroom, a brick building. I had the TV on and
tornados were all around but fortunately, we didn’t get anything.

I was on a claim, inspecting the damaged basement with a policyholder and family friend who happened to be a policeman. As we were inspecting he got a call saying that a tornado was headed our way. I grabbed my keys and said I was going home, I meant to California. The
cop said no, I wasn’t going anywhere. I said no, I’m going home. He assured me I couldn’t outrun the tornado and wasn’t going to let me leave the basement. The tornado didn’t hit the house but I was ready to run.

- New Orleans: I was working a windstorm and had brought my niece, Laura, to work with me. We were staying in an Extended Stay when a hurricane formed and was projected to come up the mouth of the river. We decided to ride it out, we were on the 4th floor or so of the hotel and I couldn’t imagine that we’d get hit so hard. About 11pm Dale called and asked if we had emergency supplies and I said no. So Laura and I went to the Target nearby, buying candles and holders, plus some food. The hurricane lost its power before landfall so we escaped that one.

- Hurricane Ike: I was working a hurricane and staying in the KOA located at the bottom of the levee in New Orleans. Hurricane Ike formed and was forecast to hit nearby. I decided to ride it out in the RV. Twinkle was with me on this one. As the winds increased, the RV started shaking and the roads around us closed. Twinkle got under my feet as I sat at the table blogging at my first real blog. The management said that if the levee broke to get on the roof of the bathroom, which at the time sounded fine but then, in reality, I was uncertain on how that would work. Fortunately, the hurricane hit south of us so we just got some wind and rain.

- Washington DC and Maryland: I went to DC to work the earthquake but when I got into DC a hurricane was coming up the coast. I got into DC before the storm and stopped to buy a lighter and a few more supplies. I’d brought candles and some food from home. I was staying on the 3rd or 4th floor of the hotel which lost power once the hurricane came onshore. Fortunately, I had candles, a flashlight, and food. I had to go north, into Maryland for claims but was following the storm so still had no power for several days. Staying in hotels with no power was a challenge, charging the laptop and cell phone with my inverter, using candles for light, no AC.

I much prefer an earthquake even though they are not predictable. This California girl is just not into tornados and hurricanes. 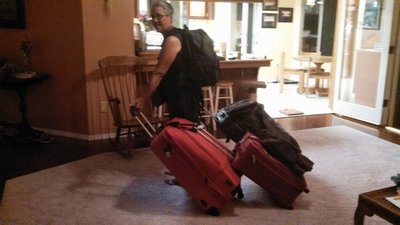 Traveling to Virginia for Earthquake and Hurricane claims

The call came asking for if I could work earthquake claims in Virginia; Virginia? The earthquake was only a 5.8 and who has earthquake insurance in Virginia? I’d heard about the earthquake but hadn’t paid any attention as we “Californians” sleep thru those little things.

I reluctantly said yes. Dale is going on terminal vacation in 2 weeks and I really wanted to be home when he came in the door that last time. Plus we’d planned to go to the eastern sierras for a little retirement getaway with some good champagne to celebrate.

Unfortunately the company I do lots of storm work for has asked for me to work on several occasions but due to vacations I’d turned them down. I thought about going for a minute and realized that if I turned them down this time I’d maybe take myself out of their good graces. So I said yes.

When a Cat adjuster agrees to go work a storm they have about 48 hours to get on site. I usually take longer as I drive and pull my RV. I can get away with taking 3 days to get on-site as the company knows that I’ll start working while on the road and stay as long as possible at the end of the storm.

As mentioned this is a major change of plans as we had planned a little retirement getaway in about 10 days. Unfortunately, the RV is not ready to go; we had some small items break that are now in the middle of repairs plus it needs 2 new tires.

We decided that this time I’d fly, get on location sooner, hence work sooner and Dale will drive across country by himself after he stops working on Sept 5th. Kids will all be in town the weekend after he stops so he can get the repairs completed, visit with kids and then head on to wherever I am.
Dale driving across the country by himself, pulling the RV is a complete reversal for us and very strange for me. I’ve driven back and forth so many times from home to Florida or Virginia or N.C. but he has never done that. Now I’m already worried about him!

After buying airplane tickets, reserving a hotel and a car I finally turned on the TV to see that the hurricane will head right to my location. GREAT! So not only am I going to fly into the hurricane area but will be staying in the middle of it.

I made sure to pack candles, bars to eat in the event of no power but didn’t think to buy a new inverter to charge my laptop.

So we will see if this hurricane and the earthquake will produce some work. If it does We will work as long as possible and then plan to head north, maybe visit some family, go into Canada then head home.

I’d gotten a really early start on packing and thought we’d be able to get a good night sleep but alas, there are too many things to check and take care of before leaving for an indefinite time. It’s already 1:30a.m. and 5 a.m. will come too soon.