Another State, Another Restaurant

It's about friends and food

If someone doesn’t know us, they’d probably wonder how we have so many favorite restaurants and do we do anything besides eat. We were laughing about this over breakfast and realized that we are only in the southern part of the US. We have many more favorites in other states.

And so from New Orleans we drove straight to Houston, TX, to meet a dear friend and co-worker, Jim and of course eat. This time we went to his favorite place, a little French Bistro.

The restaurant isn’t fancy but really nice. We felt mostly fine in our jeans but there were also people in formal wear. Maybe we just felt fine because we didn’t pay attention. But the food was very French and such a treat, as we’ve been eating lots of local, hole in the wall foods. Unfortunately, I couldn’t eat the sauces but I enjoyed my pork chop, and Dale his Canard A la Orange. Jim had wild boar. With mussels for an appetizer and a nice pinot, we were happy campers.

But, the best part was visiting with our friend, we haven’t had much time to visit since we were all in Boston. We’d really gotten to know each other when we worked the Richmond Fire about 3 years ago. We did some nice dinners and wine tasting together in the Sacramento area, so it was great to just sit down and catch up.

After dinner, we drove to the next rest stop intending to make it to San Antonio and Mi Tierra’s for breakfast. Mi Tierra’s has been a favorite for many years.

We knew that my grandfather had worked in the area in the early 1930’s. We have a photo of my grandfather standing by the produce truck he drove with my father and uncles as children. My grandfather worked with the bananas. We believed that the basement of Mi Tierra’s had been the banana distribution center and had learned, on one trip, that there was a basement that had been used for produce.

The owner requested that we send a photo of my grandfather with the truck and they will put it on the wall. There is also a chance that at some point we might get to tour the basement. 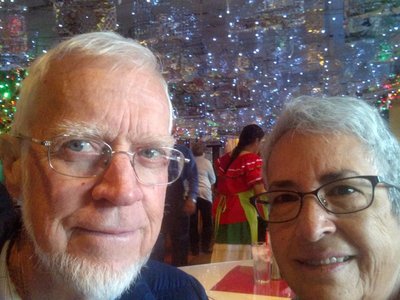 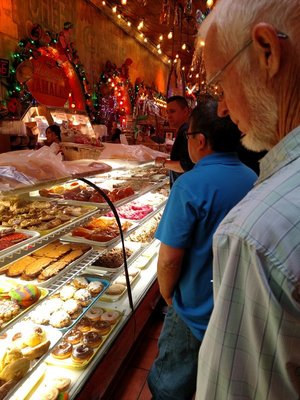 Chilaquiles recipe has changed, they use to put strips of chilies in but now leave them out because the chilies are too hot. We will go for other dishes next time and of course the pan dolce.