Adventures in a Toronto Hotel

So one more blog on the hotel adventures. I was staying at the Hilton when the price went up to $200/night from $85, not a good option. I was leaving for home soon so I just went for price, the Super 8. Well this was not a Hilton.

The room was clean so I can’t complain about that but it was at a truck stop with truckers in and out. There were lots of families there so I wasn’t too concerned about safety. The main problem was that there was no place to work except on the bed. I slept, ate and worked while sitting on my bed. But it was easy to take a nap, I’d just scoot down, nap, then scoot back up to sit and work.

I was working one evening when I heard yelling in the hall. A woman was yelling “get your hands off me”, “I’m going to call the cops and you will be arrested” and on and on. I called the front desk and told the guy that he needed to get up there and reported what I was hearing. He asked me if I’d gone out to see what was going on. I told him that I had not gone into the hall to see what the fighting was about and did not intend to, that was his job. 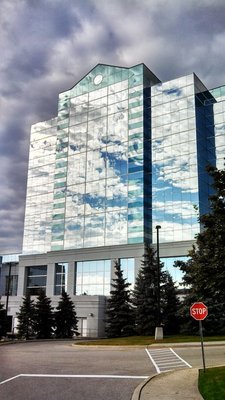 In a bit I did hear manager talking to whoever was having issues and that was the end of that excitement. 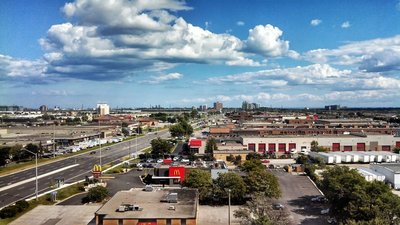 In Toronto it seemed that I was a gypsy. I stayed in about 8 different hotels in 6 weeks. I never unpacked my bags, just kind of piled up my stuff in groups in the bags so that I didn’t have to dig for anything.

The reason I moved so many times was quite simple, the price of hotels went up and down. Of course the Hilton and Marriott’s were quite nice but when the price would go up over $120 then it was time to move.

I used Hotels.com mostly as the best deals were there but also used my free points from the Marriott. So what were some highlights?
I stayed at one Sheraton that I’ll never forget. Apparently it sold the week before I arrived but I’m not sure that it made any difference. This hotel was not in a bad area of town but it was iffy. Older and sort of refurbished.

I actually had a nice room on the 10th floor, a 1 bedroom suite. If I sat on the couch in the living room, toward the window then I could look out over Lake Ontario. The tower in Toronto was visible during clear days. That was where I worked in the afternoons writing up my estimates.

That 1st night I woke up to yelling outside. I looked out the window and here were 2 women yelling “stop”, walking down the middle of the street. There were no cars around so it was not apparent to whom they were yelling.

One of the last mornings I was there the fire alarms went off at about 6am. Over the speakers/alarms the staff was assuring us that they were investigating and would update. I looked out the door but there was no smoke. Fire engines arrived on my side of the hotel, sirens blaring, the smoke alarms still going off and I made the decision to hike down the 10 flights of stairs. If there was a fire I wasn’t going to be stuck on the 10th floor. I looked around at what I should take; I grabbed my camera bag containing the good camera and grabbed my personal laptop. I decided to leave the work laptop; not my property, not my problem.

Out in the hall another couple was trying to decide what to do; the woman could not walk well at all. I told them I’d take up the rear in the event there was a true emergency then I could help carry her. So down we started. As we went down more people joined us on the stairs. That was the longest 10 flights I’ve walked.

There was no fire, just a big adventure.

The place was sold and the new owners wanted to renovate so there were no rooms when I went to extend my stay. Off to new places.

Making a trip to save the Frequent Flyer miles from expiring.

So I got an email from United saying that one of our frequent flyer accounts was going to expire if not used by Jan 31st. Looking up the account found that it was belonging to my husband. Since he has nearly enough miles for a free ticket we decided that we didn’t want to lose the miles.

First I got into the United site and started looking at flights to San Francisco; we could make a quick trip up to our son’s plus see our 2 granddaughters. $260 for that. Then I looked up a flight to Albuquerque, NM and that was only $218. HUM! A flight to NM with 2 legs is less than a straight thru to SFO. Crazy but true.

I booked the flight to NM for 2 weeks from today with a 2 day stay. We will leave early Wed a.m. then return Friday evening. Booked the car after looking at the United offer went to Budget directly and got a better deal, but I am a member of that.

We were discussing hotels and what to do in NM and then started thinking about Taos, the places we want to eat of course. We remembered that we’d always wanted to stay in this historic hotel just off the main plaza in Taos so I looked it up on-line. We decided to spend a little more and have a room with a fireplace so that is booked.

Now we will just wait for a couple of weeks for our fun little getaway all because we had to save my husband’s frequent flyer miles.

Surviving the Edges of Hurricane Irene

Holed up in my hotel with the edge of Hurricane Irene passing by.

Luggage arrived this morning so I could take a shower and put on clean clothes. We never realize what we have until we do not have it at all. A shower and clean clothes was just want I needed! After I ran to Target, across the street and bought a lighter in the event that I needed my candles.

A few (precious few) earthquake claims came in today so I called and set appointments when possible. By afternoon, after a little power nap, I was trying to find a motel for Monday p.m. when the power went out. The internet continued for another hour but then that went down too.

The outer bands of Hurricane Irene had already started hitting but winds weren’t so high that it caused any concern, also rain was coming down but it wasn’t that bad.

I got my candles out, glad that I had miss-ordered the long lasting tea lights instead of the regular one. I set up everything and organized everything before it would be dark.

Dale had misplaced my inverter (I actually think he threw it away in cleanup frenzy) and I didn’t have enough money to buy another one before leaving. Unfortunately I’d run down my laptop battery so started downstairs to see what I could do. After waiting for the elevator I saw that I needed to use the stairs so on went the flashlight and down 4 flights of stairs I went.

I sat in the car for about an hour charging the laptop and phone, sending claims info off and checking on the weather channel for updates.

Fortunately I’d brought some canned smoked trout and rice crackers. That made for an easy dinner with the rest of the red wine I’d bought last night. 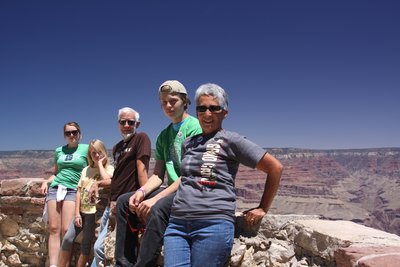 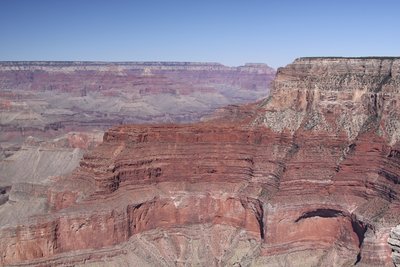 Another day of driving and we were at the Grand Canyon south rim. As the campgrounds were full we stopped at a campground just south of the park called Ten X. The campground host saw us looking for a site, we’d left Bel and Elias at one already. The host gave us the number of one he thought was perfect; he went and picked up the kids while we got into our campsite.

In the morning we went straight to the canyon as we wanted to eat breakfast at the El Tovar. When our boys were young and the farm was falling apart we went to the Grand Canyon and someone told us to go to the El Tovar for breakfast as one can find a cheaper yet just as lovely meal. We have always done that.

The kids were excited to go into the El Tovar for a meal but careful not to look like we were out of place. Bel reminded me not to look around too much as to seem as if I never go to a place so nice. We had a great breakfast, kids were convinced, once again, that they had the best meal ever.

From the El Tovar we gathered the Junior Ranger booklets and then walked along the canyon enjoying the views. At the lookout studio we took a photo of all of us, and found some books at the Kolb studio.

We had an early dinner back at the campground where the kids played rock hopping games and then a nice campfire.