Canoeing in the Franconian Switerland

A little about Dieter: Dale and I were going to go to the Middle East for a visit with relatives. I had to do last minute shopping at the mall and boys were small; 1, 3 & 4. Clayton would turn 2 in Jerusalem.

The boys had been really good so I took them for a quick stop at the Baskin Robbins in the mall. There were 4 guys and they insisted on giving up their seats to us. They had a heavy German accent so I told them my last name was Siemens. Ah ha; one worked at Siemens! They were with an American soldier and he was going to take them around, but at that moment they would visit Texas.

I told Dieter that when they returned from Texas and we returned from the Middle East that I’d make them a Mexican dinner. They did come for dinner after we all returned to Bakersfield. Dieter returned a couple more times and we have been to visit him in Amberg. He lets us use his apartment, helps with whatever we need, we travel to Prague together.

Dieter has a long-time friend who travels with us. She doesn’t speak much English but I do love her and wish we could speak together. She gave me her clothes when my bag didn’t arrive right away once. She always makes sure we have enough food for the trips.

Dieter had invited us to go canoeing or kayaking. The kids thought it might be fun so we said yes.

We drove up to the corner of the Francon-Swiss area to a river where many people go to canoe. This area is Northeast of Nuremburg, on the Czech border and called this because the houses look like those in Switzerland as per Dieter. Wikipedia http://en.wikipedia.org/wiki/Franconian_Switzerland has a different version.

The river that Dieter had chosen for this ride is not a fast river, Pegnitz, perfect for us novices. Bel and Elias went with him first. About ½ way down they stopped where we had found a place by the river. There were picnic tables and we pulled out our cheese, bread and sausages. After lunch Dale switched places with Elias and they went on down the river.

There was another site where we were able to pull off to meet them. At this site the canoes had to come out of the water and be pulled over some logs, around a block in the river. There is a swing set up and we saw some people swinging before continuing the canoe trip. Sure enough Dale, Bel and Dieter did just that. 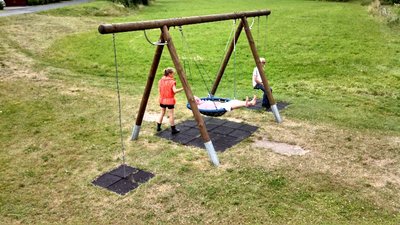 Another dinner but this time Greek food. What a change for us! 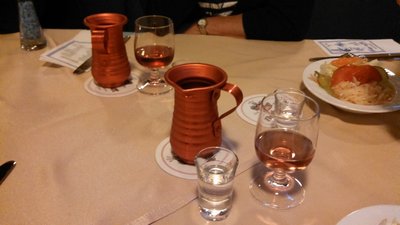