A Side Road Trip to Franconia

Taking the road thru Franconia Swiss 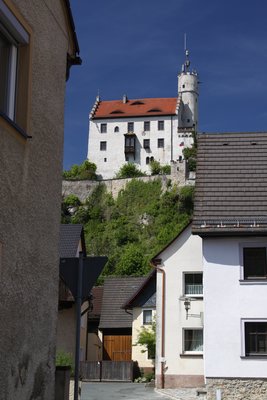 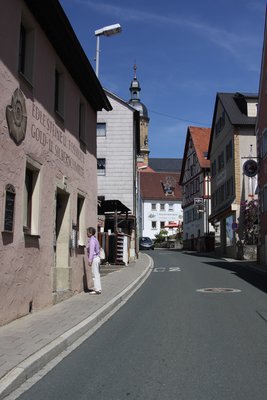 Dieter and Inge (his girlfriend of 20+ years) wanted to take us to Franconian Swiss, a place they go canoeing in the summer. This area is a valley surrounded by cliffs and forests named Franconia for the region and Swiss because it resembles Switzerland. Because it is spring the flowers are starting to bloom and the trees are green. A river runs thru the area so that one road follows the river for a way. The river runs quite quickly; Dieter said that they once had a canoe accident on a bend and American soldiers who were nearby assisted Inge when she was injured.

The Franconian area is hilly and has several small towns, where many of the houses are made with timber framing, something that is stereotypical of a small Swiss chalet. Castles or fortresses are on the highest hill of each little town and more than one has a Basilica rather than just a church. Coffee houses are on many corners.

Some of the buildings are from the 1700’s sitting just feet from the road, which are old paved roads still. The roads are very narrow and winding but it was very exciting to hear then see a Lotus 7 flying along!

Dieter went from the main road to a side road leading to yet another small village where we found a small guest house serving lunch in the garden. We were able to eat the foods served everywhere; rolled stuffed beef with knodels (a potato dumpling), white asparagus with ham and butter sauce, local trout all served with a plate of salads and washing the food down with the beer.

I was surprised to find that many of the fortresses are actually private owned. Some have a room or two open to the public with historic items for display for a small fee. One had a large book from the 1400, tools from the Neanderthal times, a figure from the 1500’s and so on. I have a fantasy that it would be fun to own and live in an old castle. The dream is fun because I do not have the upkeep with a dream.