Justin was only able to obtain a total of 5 permits so the new plan was that he, Dale and Lucian would backpack into Grouse Lake overnight. I would stay with Christine, Cassie, Sequoia and Zaya.

Justin and Dale left by 9am leaving the rest of us on our own. Christine and I packed up the kids and went to the part of the river by the store. The beach was mostly rock with a smaller area of shallow water. But the fun part about this area was the small fish that Sequoia could catch by hand. Unfortunately, for the fish, Sequoia would squish the fish as he caught them. Then Zaya and Sequoia found a dead trout. They were carrying it around when I came down from parking the truck. Yuck! They put the dead fish on a stick and pretended that they had caught it with a spear. After that, I’d had enough of the dead fish and made them throw it further into the lake. 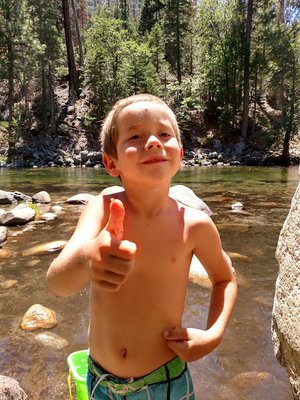 We’d promised the kids some ice cream so stopped at the store for them to pick out ice cream bars. Wouldn’t you know, the freezer wasn’t working right so that all of the bars were melty when we opened them. I took the worst one back and they gave us a new one plus said just eat the melted one. This worked well when another fell off the stick and I had to give mine away.

Back at the campsite I’d put a broken camp chair in Justin’s site. The chair was a brand new, but cheap, a folding chair that broke when we opened it. It broke so that the front left corner wouldn’t stay up and no one could sit in it. I set it on the driveway so that it looked fine.

We got back to our camp to find our ice chest gone from under our RV and the camp chair gone. The ice chest only had veggies in it, nothing worth stealing.

Later I saw the rangers and told them that our ice chest was gone as well as our broken camp chair. The rangers said that they had nothing to do with the camp chair but had moved the ice chest into our bear box along with a warning. Additionally, our 2nd tent was in the closed campsite behind us and that we must move it. Ish! 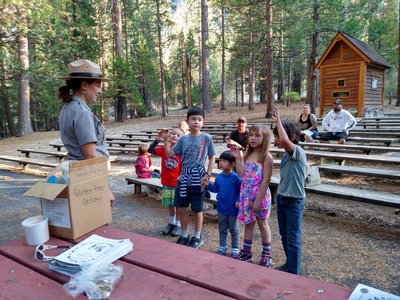 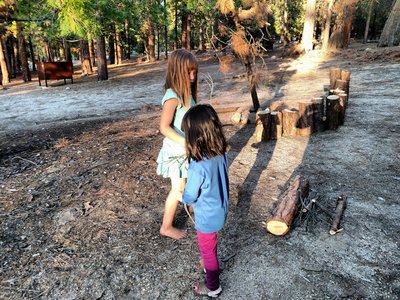 Christine and I moved the tent into our official site but left the ice chest in the bear box. Then we were off to another Jr. Ranger program on lichen.
Baths were a challenge. Go get a big pot of water then heat it. Add it to a pot of cold water in the small bathtub. Wash a kid, rinse a kid then start over. Fortunately, Christine remembered the kids’ buckets we’d taken to the river. She’d get both buckets filled then go back for more. Everyone did get clean and dinner made and by 10pm we were pooped.

Christine and I have not had any time alone since she arrive here from China. We sat up, drank wine and talked until after 2am. She is truly a joy to know and I’m so glad for the time alone for the two of us.