Before we could leave the Badlands we had to make one last trip to the Visitor’s center for the last purchases: a Junior Ranger hat for Christabel, books for Elias, water bottles for the RV.

Today is July 4th so we wanted to take the kids to Custer, S.D. We were here 8 years ago for the 4th and it was so fun that we thought that the kids would like that too. I found on-line that there was to be an old-time parade and fair in the afternoon and a kid’s area for old-time games.

After a drive thru the black hills we got to Custer when it started pouring rain. We dropped off the RV at the park and then went downtown to the fair. The fair was held at the historic courthouse and was very small but fun with booths of jewelry, candles, quilts and wood work stuff. Old cars were to be on display but when we arrived it was raining so we do not know if the cars had already been towed off.

We walked thru the fair looking at the displays then listened to the kids singing on a stage. I entered a raffle for $5.00 to win a handmade quilt. It was still raining and nearly over so most people were leaving early.

After a quick dinner we decided to go to the fireworks area. We’d heard that they might start at 9:30p.m. but the web-site said 8:30 so we went early. The fireworks display is held on Pageant Hill, a hill behind the town of Custer. The hill has a grassy bottom with the ¼ top of trees. The fireworks are on the east side of the clearing, set off near the tree line and viewers are to the east/left and about 200’ away. Admittance is thru donation only, people park on the hill and we watched the show from our pickup bed.

It was still light when the parade of fire trucks came; lights flashing and sirens blaring. The trucks made a parade up the Hill and around the hill then continued their parade around the town. A vender was making warm kettle corn that could be smelled all over the hill.

Finally it was dark and the fire department started their show. A DJ started the music but there were few fireworks. Finally the DJ announced that the music had been started much too soon so everything had to start over.

This show lasted about 45 minutes with many overhead displays; it was an excellent program. We believe that it is one of the best in the country. 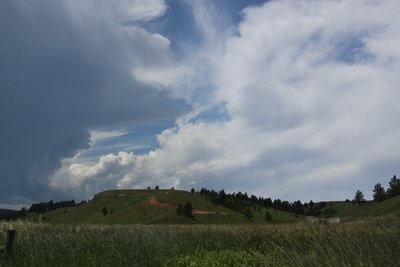 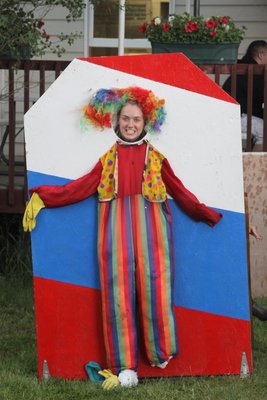