Working Our Way Down Vancouver Island

Our day started well, woke up early; we had to check out of the RV park, hop on a ferry and hopefully make it to Oregon by dinner. That all looked good until I Google mapped everything and looked up the ferry schedules. We’d already missed the early ferries and wouldn’t be making Oregon any time soon.

Nanaimo has fewer ferries but by the time one drives to Swartz Bay there isn’t any real time savings. Unless one has missed the last one in Nanaimo, then there are later ones from Swartz and Victoria.

We wanted to walk to the viewpoint of Elk Falls and then because we’d miss the next ferry, then we’d have lunch at this little hole-in-the-wall restaurant. From lunch, we’d drive down to Nanaimo and catch the 5:30 ferry to Vancouver.

The falls are a little bit of a walk away, mostly downhill, which means uphill on the way back. The path is paved so accessible to everyone. There are several paths off of the one to view the falls but I’m not sure if they are paved. The falls are small next to some we’ve seen but a nice walk. We took the dog, but she did not like the grated stairs down to the metal suspension bridge leading to a lookout. Other dogs were not having a good time either. 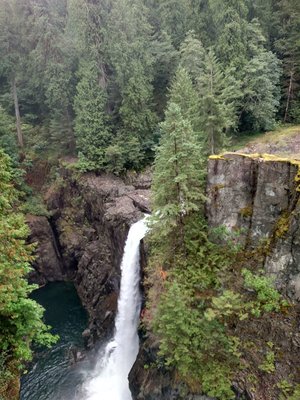 Lunch- Dave’s is right on the dock where the fishing boats come in, with about 4 little tables inside and a small counter and outside a deck. There was a line the entire time we were there, not a long one but nevertheless, someone always arriving. Everything on the menu can be made gluten-free which means I could order fish and chips. Oh, they were such a treat. Next time, I want to order the oyster sandwich!

From lunch, we stopped and bought some Canadian Whiskey for Dale and a couple of small items. Then we drove down to Nanaimo. The leaves are turning on the island and in the storm light looked so beautiful. 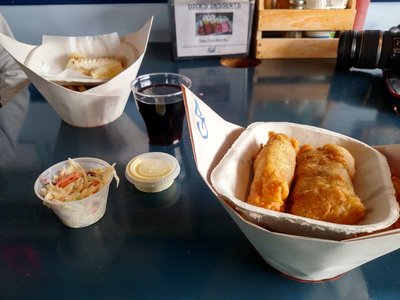 By the time we got to Nanaimo, an hour before sailing, we saw that it was 100% sold out. After calculating times to drive to the next ferry, we decided to get in line for the 8:45 sailing. We filled our time, me with doing old word games and Dale walking Twinks and napping. 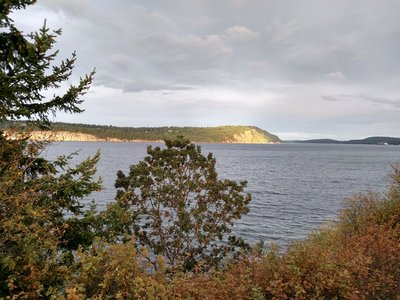 All part of the journey.