My husband, Dale, and I have been completely immersed in all things “Downton Abbey”. He was still working last year when Season 1 aired so I watched it alone, hooked. Just before Season 2 started in January our Public Television station aired season 1 and I insisted that he watch. After a few minutes he was hooked as well.

So on nearly all of our Sunday evenings for some time now, we could be found in front of out telly! We’d cry at the sad parts and tell the characters what they needed to do.

Then we started watching the episodes of Season 1 on Netflix during the week. We are amazed at what we missed the first round.

When we sat down for Season 2 Episode 6 we decided to have champagne while we watched. We felt a little more like the gentrified people!

I investigated food of Downton and saw that they had many courses that could include a 2nd course of roasted chicken. I remembered seeing the footmen carry platters of small hens up to the dining room in one episode.

Well I didn’t have much for small hens but I did have a couple of chicken thighs in the freezer. I took the thighs out and when they were thawed put them into a pan with cut up carrots, onions, a little garlic, some left over potatoes, salt and pepper. I roasted them for an hour at 325 F. I set up a table on our coffee table so we could be closer to the TV.

We didn’t have any claret but had some red wine which is what claret is. We got out some glasses which are a little closer to the Downton style rather than the larger ones we normally use and used those for our “claret”. We did drink champagne before dinner and then after dinner just to celebrate for the Downton people.

Way too late we thought that we should have had a true viewing party. New plan is that we won’t be found lagging. We will watch the Season 3 episodes as they are shown in the UK; I am the one who reads the last chapter of the book first remember. Then when Season 3 airs here we, of course, will watch the U.S. version. We will then have a small viewing dinner party. Since we have a year to plan I’ll make a dress for myself and will actually make tails for Dale and serve a true Downton type dinner. I wonder who we can get for footmen! 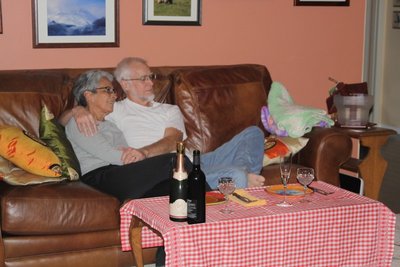 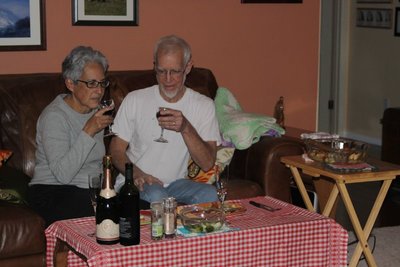