Inside a Cathedral Dome

Standing inside the dome of a cathedral 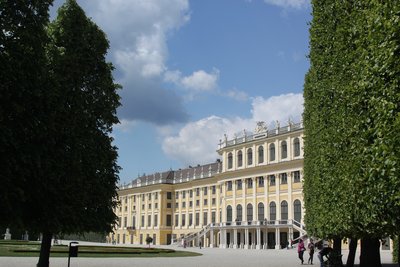 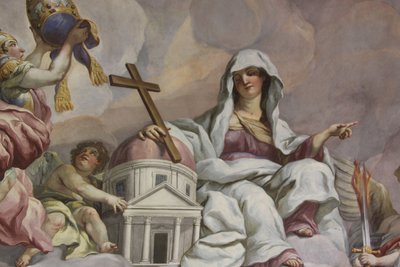 One last day in Vienna.

We’d thought about going to the Shonbrunn Palace for a tour and evening concert but after the last two days of music decided against it and just did a Grand Tour 1st thing in the morning. The Grand Tour is 40 rooms or so but it is the tour that includes Maria Theresa’s apartments. One apartment was the one in which Mozart performed in when he was 6 years old for her and his music took off from there.

The Shonbrunn is a Palace which consists of about 2,000 rooms and was a summer palace for the Hapsburgs who ruled for several centuries. There are, I think, about 400 acres of gardens as well.

The Palace is really quite an interesting place but be aware that although the books say 1 hour to visit we took much longer. 40 rooms are quite a few to visit but this tour is the only one that visits the apartments of Maria Theresa, plus some ballrooms. One ballroom is being refurbished but about ½ of it is completed so a person can imagine what it will be like when completed.

The gardens are very extensive. Unfortunately it was very cold and really windy so we only sat and drank our coffee in the garden then left as we had other indoor things we wanted to do in the city. We took our Silvia’s advice but this time did the opposite, seeing the inside and the outside will wait for another trip.

We’d planned to go to the top of St. Stephens to view the city; you can do that for a fee and then go to the Mozart house. We had to change the tube at St. Charles Church and remembered, from the concert the night before, that they are refurbishing the dome and that people can ride the elevator installed for this purpose, up to the top of the dome. We decided to do this first then see what to do next.

We paid our 6 euros and went into the church where the elevator is. Since we’d been there for the concert we had no need to look around the church much.

This turned out to be the highlight of the day. First you must ride an elevator up about 8 to 10 floors (this is a guess) that will put you on a platform at the base of the dome. From the base of the dome there are stairs that go all the way to the top, into the cupola. These stairs are about another 5 to 8 stories thru the middle of the dome into the copula.

The stairs are really not for anyone who has a fear of heights as they move as people walk and you see that they are only held together by small steel posts. But if you can stand the height it is an amazing view.

The stairs put you up close to the frescos painted on the dome, so close that one could touch them. Up close the figures are huge but also appear to be distorted as they appear to be painted for viewing from the ground.

The copula is actually much larger than I had imagined; there is a walkway across, very narrow but maybe 5 people could stand on it and look out windows the entire circle.

We viewed the cathedral with new eyes when we reached the ground.