Detour on the Cut-Off Road

A detour on the way to Wounded Knee 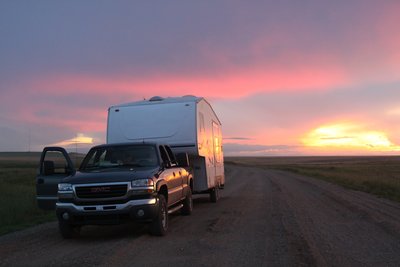 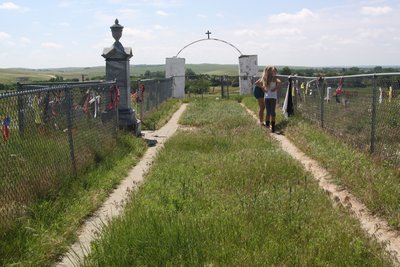 The new adventure began after leaving Mt. Rushmore; we were heading southeast towards Wounded Knee, then planned to turn south. It was getting late and we still needed to make and eat dinner. After driving for some time we had the great idea that we’d take a cut off road to the Badland’s on the south border then camp for the night in the park. (thinking like some of the pioneers) We turned to the east on the cut-off road which was a great road, at least for a few miles. The road then turned to gravel but it was a good gravel road so we were not too concerned, we only had another 30 miles or so. Well the fact was that the road turned narrow and full of ruts, we were only able to drive at 5-20 mph.

We finally, a couple of hours later, arrived in the Badlands and the paved road only to find that there was no place to pull off the road. We drove north for quite a few miles when we finally found a space to pull off we did and started our dinner, 10:30pm. A couple of cars came roaring by blasting their horns and we determined that we were on a road that was more than a just turn off.

In the morning we woke up and found that we were not only on a dirt road but taking up ½ of it. Dale thought that he could just drive up a little further and turn around in a wide place in the road. Great except that the side dropped off more than he had anticipated so he could not turn around at all. He, unfortunately, had to polish up his backing up skills and quick. After lots of starts and stops he backed up for probably ½ mile to the main road.

Wounded knee is a very moving place. The museum was not open, they were on Indian time and did not open while we were there. We walked up to the grave site and read the names on the gravestone. Then we spent a little time reflecting on the horrible massacre that occurred and the innocent people who died.

After driving south for a couple of hours we were hungry for lunch and turned off at Fort Robinson. We drove around a bit finding a place to park near the historic fort buildings. There, next to us, was a monument on the spot where Crazy Horse was stabbed and died. A fit ending to our Crazy Horse investigation.