Introducing a Granddaughter to her Ancestors

I had a conference in Dallas to attend as I needed to obtain some yearly certifications. I thought it might be good to take a couple of extra days and go to see some family stuff.

My maternal grandmother was born in Denton, TX but her mother died the following year from, what we believe, were childbirth complications. My great grandparents were married in Denton in the little log frame Chinn’s Chapel, still standing. My great grandmother’s memorial service would have taken place in that chapel and her father married his next wife in that little chapel. 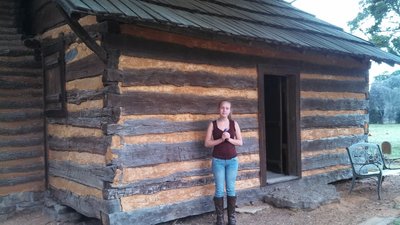 My mother and I found her grandmother’s grave several years ago but she was only putting together the information on her mother at that time. This trip I took my 13 year old granddaughter as it seemed a good time to show her some of her family history.

After the conference ended we went to Denton and found Chinns Chapel using Google maps. Chinn’s Chapel Road was a wagon road before being paved. According to the sign post, the cemetery was not easy for people to get to.

We found my great grandmothers grave but as I looked at the stone I realized that the dates were wrong: 1800-1902. She did die in 1902 but my grandmother was only 1 year old so her mother could hardly be 102 years old at her time of death.

This time we looked carefully at the graves beside my great grandmother and found one named Lance. My granddaughter kept going back to Lance “I like Lance” she said several times. My granddaughter decided to leave a trinket shed just purchased at his headstone, poking it into the ground. She also had picked some wildflowers to leave on her Great, Great grandmothers grave. 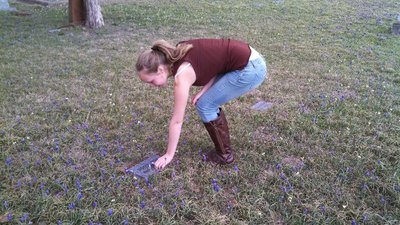 I also knew that there was a baby Robert who died only a few months after my great-grandmother, but, we could not find his grave.
We returned to our hotel and while my granddaughter was busy I looked up my great-grandmother linking into Ancestors.com. I found that not only was the date on my great grandmother’s stone was wrong, but also found Lance to be her father. It was so fun to find that Lance was actually my granddaughter’s real great, great, great, great grandfather. He would have loved her!

As I forgot my big camera we decided to go back the following morning on our way to Tishomingo.