Florence, a Wonderful Place to Visit.

For this trip we are traveling with an immediate group of 20 from California, 6 of us are adults. We are part of a larger group totaling maybe 30 kids and 11 adults. The other groups are from Florida. One group is a high school art class and the other group consists of middle schooler’s.

It has actually been fun to meet other parents and/or parents on this trip. We have stuck together during meals especially and during the evening free time when kids are running around.

The first night 4 of us women sat together at a table and 2 of us decided to buy a bottle of wine, we needed it. One woman thought that she really didn’t want to drink but soon joined us. Another woman saw we were having fun and brought her bottle of wine over to share. We now call ourselves the “Red Wine Sippers In Italy". Each night we take turns buying the bottle. It is a great way to do some wine tasting in Italy. 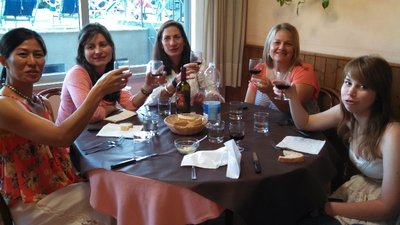 Today we spent the day in Florence. I’ve read about Michelangelo and his David for many years. It was amazing to see the David. The muscles and the veins are exactly as I’ve read. David was much larger though than I thought he would be. I took photos from all angles. Seeing David was so amazing and so moving. He is my new “hunk o man”!!! 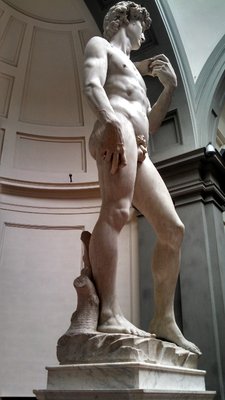 There were other Michangelo’s on display, most unfinished. It was interesting to see how he would see find bodies in the stone.

We walked along the Vasari’s Corridor to the Ponte Vecchio bridge, all build in the 1300-1400’s. There is a story around this corridor and bridge. You can read about it at: http://en.wikipedia.org/wiki/Ponte_Vecchio. 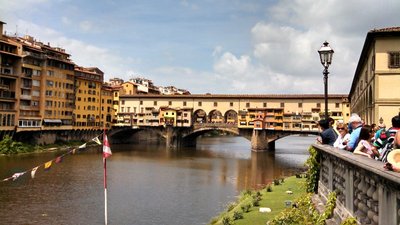 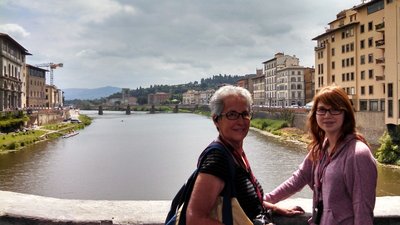 Another place we visited today was the Duomo, the very large domed church. You may pay a fee to climb the 400+ stairs to go into the domed area. The dome reminds me so much of the Saint Carl’s Church in Vienna where you may take the elevator up then walk up stairs into the domed area. St Carl’s is smaller but having done that already, and Sunny being unable to walk I think we will skip that hike. 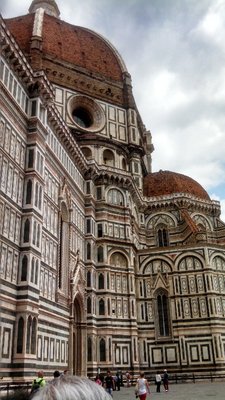 Still another day with no luggage or fresh clothes. Lufthansa is saying that they do not know where my bag is and on the site to trace it the site says it is still being traced. The tour leader spoke with someone who told her I may buy some emergency clothes and they will pay 50%. We are still hoping that the bag shows up in Rome. For now, I’ll buy some emergency clothes tomorrow during free time, Dale has had to go to CVS and pick up the prescription for replacement medication and I’m starting to make a list of items in my very stuffed bag.

There are worse things than having to shop for new clothes in Italy!

For those who are interested; the weather was very pleasant today, about 75 F with a breeze in the afternoon. Some clouds.