Ready to Backpack but alas

Another long day of driving, we wanted to make it to Bishop in order to backpack on Tues. Alas, it was not to be. Best to just take the journey in stride.

On Monday, we had a tire blowout on the RV and put the spare on. Then later the spare blew before we could find another replacement tire. We’d stopped a couple of tire stores along the way, but no one had a used tire for a spare.

Fortunately, the closest town with a tire store was only 25 min away so we were able to buy 2 new tires. We were on our way with a delay of a couple of hours.

We had another driving day on Tues. We’d decided to stop at the Patagonia store in Reno since we were so late. Our friend John was in Reno for the day and stopped by to see us before we left the area. Fun!

It was Dale’s birthday and we thought that maybe we could get to a campsite where there was a nice view. Our son suggested that we camp at Convict Lake then just do some day hikes out of the campground.

As we were driving south, it became more and more smoky. My nose plugged up and it became hard to breath. It was getting dark so we stopped at the rest stop near Mammoth. We found a place to park on the outside space so we were able to extend the slide out. We still made a nice dinner of sausage simmered in gluten free beer.

As we drove past Convict Lake the following morning, the smoke was so thick, worse than ever. The smoke is from a huge fire in Kings Canyon and is being blown over the sierras into the valley where 395 runs north and south. The smoke is the worse from June Lake area down to the Mt. Whitney area. We stopped at the Inner agency, where the ranger told us that he wouldn’t hike in the smoke as it is in unhealthy stages. So much for backpacking. We consoled ourselves with macaroons and coffee at Schat's. 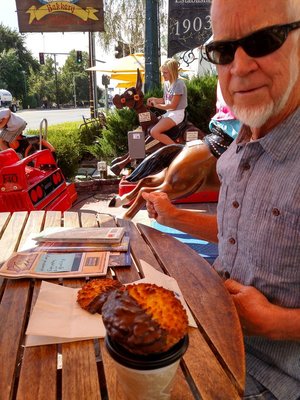 We decided to return home via Walker Pass that goes into the Lake Isabella area. We thought we’d stop at the Walker Pass Campground for lunch, this is where the Pacific Crest Trail crosses the area. This is the hiking trail that goes Mexico to Canada.

We stopped in the empty campground and set up for lunch in the RV. We’d finished lunch and were cleaning up when 2 young men walked up the hill with packs on. We came out of the RV and asked if they were hikers. Yes, they had been on the trail for the past 2 months, starting out in Oregon. They were going to hike to Mexico, the end of the trail. We discussed backpacking, people hiking the trail and shared water and our backpacking food with them. 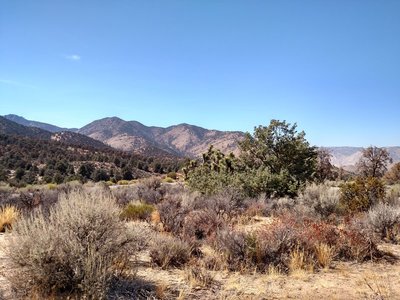 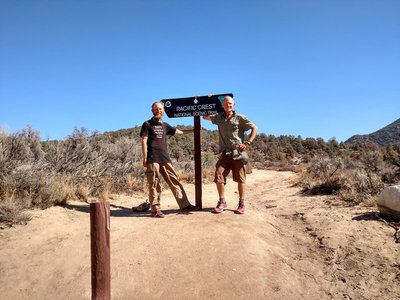 The journey ended with a really great conversation.