Trying to Get This Show on the Road

This is crazy, I’m leaving for Europe in only 9 days. I’ve only just started to think about this trip seriously. And I’ll be gone for 1-1/2 months, YIKES!

There will be 6 of us traveling to Germany, 2 will return to Germany and 4 of us will go onto Salzburg. Then 3 of us will go the remainder of the trip.
The problem? Train tickets would cost nearly $3,000 and an RV for 2 weeks $2,500. Finding all of that info sent us back to the beginning.

Avis sent me a link for a car rental in Europe. I checked out the rentals and found that we can rent for a fraction of the cost. Dale and I went into AAA and got our International Drivers Licenses, good for 6 months.

We will rent a 9 passenger van for 3 days in Brussels so that we can travel with our friends too. Then we will trade the van for a mid size SUV and rent it for 28 days, the max you can rent. It isn’t all perfect to rent a car as we will need to find parking in Salzburg and Vienna, and don’t know yet if we can take it into Prague. But it is a start.

Without an RV we will need to camp in campgrounds, which means bringing some camping gear. Don’t know if we will fit in the car. We will read more of Rick Steves on camping in Europe, and we have a really great friend in Germany who has done lots of camping and will be glad to help.

Really exciting is that we got tickets to the Mozart Requiem at the St. Charles Church in Vienna. After some initial hassles, like buying the wrong tickets, we were able to get tickets to see Vivaldi’s “The Four Seasons” at the St. Stephens Church. OMG, this is so exciting!!!

This is shaping up to be an adventure.

Our last concerts for this trip 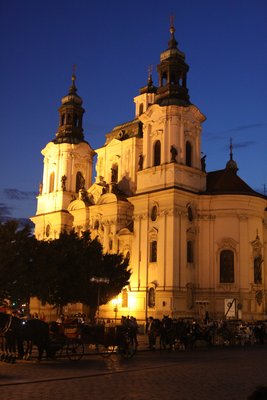 Just in front of our hotel is a square named Kafka after Franz Kafka, an influential writer from the early 1900’s. This square is very small but nevertheless it is a square, maybe the size of the lot of our home. Next to the square is the St. Nicholas Church built in 1735 and it is one corner of the Old Town Square.

We decided several things yesterday: 1. We’d take Dieter & Inge to a concert tonight 2. We’d introduce Dieter and Inge to champagne and chocolates on the Charles Bridge and 3. We’d visit the Lobkowicz Palace n 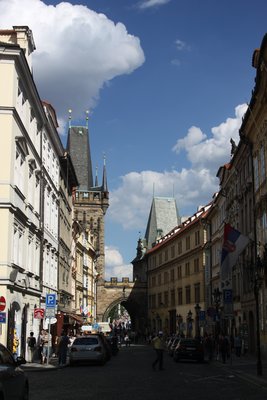 ext to the castle area and attend the 1pm concert in one of the palace rooms.

Yesterday we saw a poster at the St. Nicholas Church for a concert tonight at 8 so we thought that it would be a good on to attend with Dieter and Inge.

We headed over the bridge and walked up the narrow walk up to the Palace. We got there a little early so decided to have a cappuccino in the courtyard while waiting for the line to start.

The palace was built early in the 16th century and inherited soon after by the Lobkowicz family. The family holdings consist of about 4 castles but at one time were about 10. Great-Grandpa Lobkowicz was married to a British woman so when the Nazi’s came she was already in the U.K. with the kids. She wrote a letter saying that she was dying and Grandpa got out with the clothes on his back. After the Nazi’s were gone the family returned and got everything back. Then the communists came and took everything again. This time the family came to the U.S.

The current Lobkowicz grew up hearing about castles and carriages. He came to Prague to study when the Velvet Revolution took place and he was able to recover nearly all of the lost property. He and his family care for everything today.

The concert lasted 1 hour and consisted of 3 musicians; violin, flute and piano, playing various popular pieces. Some of the pieces really worked for the 3 of them while some were not so great. Nevertheless we enjoyed being in an interesting Palace for some music.

After the concert we first ate some lunch on the balcony overlooking the old city then took the audio tour which turned out much more fascinating than we had imagined. We were primarily interested in the collection of music from Beethoven and instruments but ended up looking at all of the portraits, dishes, and other collections.

We’d finally finished with the castle when Dieter sent a text; they were getting on the trolley so we got down the hill arriving about the same time Dieter and Inge got off the trolley.
Inge and Dieter were dressed for the concert so we all walked back to our hotel, buying champagne and chocolates for later, although they did not understand what we planned to do. A little street food to hold us over in the square then into the concert.

There was a large group already gathered so we got into the pack for seats. No one was sitting on the seats placed in the center so we went to get those when I saw that the folding chairs in the very front row were not taken. I quickly went to the front and signaled the rest to follow so we ended up with the best seats in the house.

The concert was a string orchestra playing various pieces including Mozart’s “Eine Kleine Nachtmusik” and Vivaldi’s “The Four Seasons”. Now when we entered the sky was cloudy but that was it. During the Mozart we saw thru the stained glass windows behind the orchestra, a bright light flash then the thunder hit. The orchestra was thrown off briefly; it was funny to watch the reaction as we could see each lightening flash and knew that the thunder would sound.

What an ending to our trip.

A day with 2 concerts in Salzburg

Dieter called early to say that the car was in the shop so they would meet us for dinner in the old city as we offered to share our free meal with them. This freed us up for the day to do as we wanted, but actually we had stops that we really wanted to make, plus a concert that we’d seen advertised.

We started with a second visit to the Salzburg Cathedral “The Dom” just to look up to the dome and to see again the place where Mozart was baptized as a baby. “The Dom” is an amazingly impressive Cathedral; the dome was destroyed during the war but rebuilt, while a very small area of the structure is from 774, it was mostly destroyed by fire. The structure is not so Baroque as some but the statutes are much larger so that it takes your breath away to see. This would be amazing place to visit on a Sunday morning but alas we will be in Vienna by then.

After another ride up the hill to the fortress we got to visit some of the rooms. I especially wanted to see the torture chamber but alas I learned that it really wasn’t used for that. Still the view from the top was great.

Upon arriving in Salzberg we’d learned about a Mozart concert taking place every afternoon at 3p.m in the Residence. As we’d been to the Mozart Residence I assumed that it was taking place there but we found out that it was actually at a place in St. Peters called the Residence where the Arch Bishop lives. We were not able to go before so today we were planning our time around this concert.

After the fortress we still had a couple of hours and had worked up an appetite and were thirsty so thought that we’d hit the beer hall reported to the ‘beer hall of all beer halls’. We walked very quickly to the beer hall as it was several minutes away only to find that it did not open until 3pm. So tired, thirsty and hungry we turned back to the city to find the concert.

We found, thru asking lots of people, where the concert was and made sure that we were first in line, then got the best seat. The venue was held in a small room, probably built in the 1300’s or so with arched ceilings. A harpsichord was in a corner with chairs set up on 2 sides.

At 3 p.m. the director of music (I think that is his position) came in and gave a little lecture on the instruments used during Mozart’s time. Then the harpsichordist came in to play a selection of pieces including the minuet written by Mozart when he was 6 years old. It is simple now but when one thinks that he was so young it is very impressive. This concert was quite fun as it was a very old instrument played in a very old room with about 20 people in attendance.

As we were walking around we saw the Director of Music putting up signs for another concert, this one at 7p.m. with tickets going on sale at 6 or so. The music was 2 Mozart piano sonatas to be played by a Russian pianist.

We arrived 1st once again to purchase the tickets and once again the Director took us to where the best seats would be. This room was in the St. Peters with arched ceilings but set up in one long corner of the room. The piano was set up in the center with seats on 2 sides and about 30 people were in attendance at this concert, our seat about 10’ away from her right hand.

The pianist was a young woman who was from Russia but studied at Julliard and she was amazing. She walked in with no music, sat down and started playing. The hands glided over the keys without any effort, it seemed that she wasn’t hitting the keys just by looking at her hands. She produced strong powerful sounds and then the softest sounds with barely a touch. Both Dale and I were so moved by her music.

Dieter had phoned on my cell phone earlier that the car was still in the shop so we went to dinner after the concert on our own. This was the free meal given to us by the Hotel for all of the hassles we had at our arrival. We just bought the bottle of wine and drank the entire bottle, but the hotel was just a short walk so we didn’t care. But what a great last day in Salzburg. 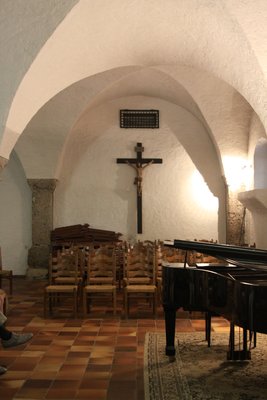 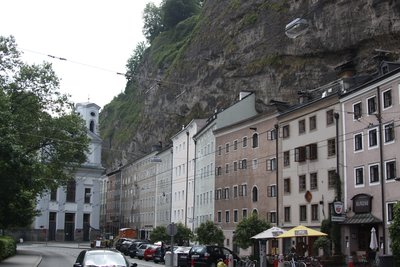