Rome- We Made It

What a very long day of walking and looking.

We started at the Colosseum with a guided tour. We went in thru gate #57, a gate where the regular people would have entered. The games were free but people had to have a ticket to enter; a ticket showing which gate (status based) they would enter.

We were always walking: down the long entry corridor, up 4 flights of steep stairs, around the upper level, down the stairs to the lower level. The sun was hot and bright so we were sweating, but probably not as bad as the gladiators in their time. 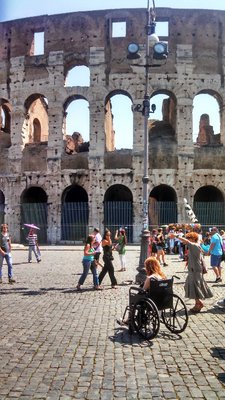 From the ground floor we were able to see the bottom corridors open to the air now. It is easy to imagine the wild animals, which had been confined there for several days, and the people who would fight them, and the gladiators who would fight for their lives. We wondered what it would have been like to see that kind of fighting. 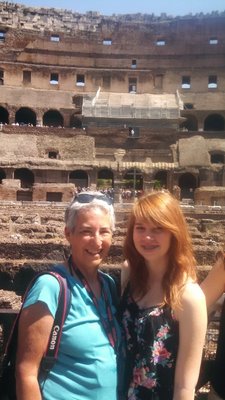 From the Colosseum we walked up the broad street, where the chariots would enter, up to the forum. There are ruins on all sides. We didn’t have time to do anything but look. I took a ton of photos and hopefully will know what they are about when I get home. I’ll download a map of the area and then sort thru what I saw.

I must add; a member of our group is named David. He has been so wonderful this trip, but I’m guessing that he didn’t know his trip would be so entwined with ours. David missed the part of our trip after the Colosseum as he wheeled Sunny thru using the lifts. Our tour leader gave them a private tour but they still missed a large amount that we saw. The wheelchairs cannot make it thru on the cobblestones. It is nearly like rock hopping in a river. I really felt badly but he insisted on taking Sunny and wouldn’t hear of anyone else touching the wheelchair. David is always making corny jokes but is fun and so protective. We are so lucky to have him in our group. And I must give everyone credit for pitching in and helping. David helps thru the worst but nearly everyone helps wheel.

So from the forum we went out to the road where the ruins extend across the large boulevard. More forums for one thing or another. More churches, the Christians turned so many sites into churches, like really you need another church?

Several of us had opted not to go to the catacombs. The tour guide gave us a map with the way marked leading to the restaurant where we would have dinner. A friend (new from this trip) joined Sunny and I for a walking adventure, and adventure it was.

Our tour guide had recommended that we eat in the Jewish Ghetto, Ghetto doesn’t have the same meaning here as it does at home. But it is the area where the Jewish people lived. The restaurants have a fusion of Jewish and Roman foods with the spatiality of fried artichokes.

Terri and I took turns pushing Sunny, walking and referring to the map. Unfortunately we did not see the street we needed to take; the map was hard to read the street names. We walked and walked not recognizing the street names at all. Finally we walked up a hill, me pushing the wheelchair and Terri going to ask some police where we were. Of course we were way past where we were supposed to be. So we walked back, found a street which still wasn’t the right one; Octivito instead of Otilito. Another cop pointed out the street, right in front of us which led straight to the Jewish Ghetto. After meals of fried artichokes and rare meat with dried beef and truffle sauce we were stuffed. We needed to do lots of walking before dinner in 3 hours.

After walking and walking we came up on large structure. When we got to the front we found that it was the Pantheon. Entry is free so we entered and enjoyed the cool air.