First we needed groceries. We saw that a “Bella” supermarket was close to us. Of course we got lost while walking and had to ask directions.

Once inside we picked up our groceries and went to the checkout stand, put our food on and when it was our turn waited to pay. The checker asked something in German and of course I said “what”? He asked if we’d weighed our bananas to which I answered no. I mean really? Weigh bananas? What’s up with that? I must be used to Trader Joe’s and never weigh my own stuff at the regular grocery stores.

I went back and weighed the bananas then had to go around the entire store to get to that checkout line. Some lady in the line got really mad; Dale heard her speaking loudly. We took our purchased groceries over to the counter in order to pack them. While we were packing the groceries the checker was talking and pointed at us saying that we were Amie’s. This was so funny, we started laughing, which I’m sure didn’t help the situation at all. But this is what Dieter says that the German’s call us. I guess the Austrians do too. Oh watch out for those Amie’s!!!

A hint: In Europe you must bring your own bags to the grocery stores and you must bag your own groceries. Cuts down on the trash that’s for use. Best to bring a back pack or bag to carry your stuff home in.

We went back into the old city via the U which is really easy to use, by the way. After maybe a 10 minute ride we got off at Karlsplatz, the St. Karl’s Church. This time we picked up our tickets for the Mozart Requiem and then Dale and Elias took the lift and stairs up into the dome. I stayed down with all our stuff. The skies were really threatening but only a few drops fell.

St. Karl’s Church was refurbished several years ago and after cleaning the frescos in the dome, scaffolding was left so that people could get a close up look. You take an elevator then walk up stairs into the top. Dale and I did this 3 years ago and thought that Elias would enjoy it. 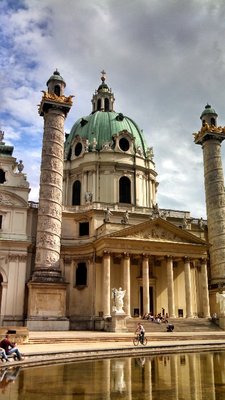 From St Karl’s we walked to St. Stephens where Dale and Elias climbed the stairs up to the tower for another view of the city. I sat and had a cappuccino, writing and people watching. 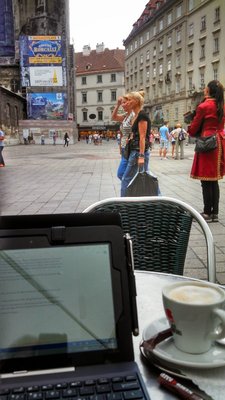 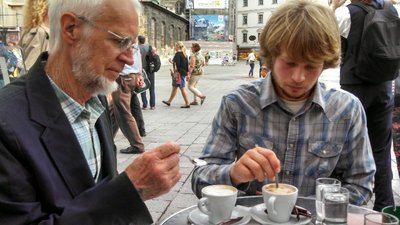 The skies cleared and we strolled back to St Karl’s, stopping to listen to a 3 person Russian street group. They played their version of Vivaldi’s Four Seasons, Russian and American music. 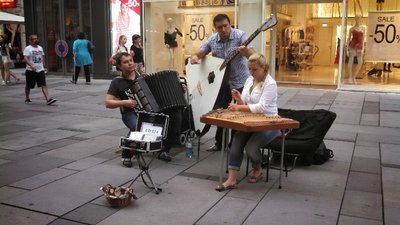 Our concert was at 8:15pm in the St Karl’s to hear Mozart’s Requiem. We heard this same concert 3 years ago and found it amazing. Again we had front and center seats the 2nd row from the front. We were sitting waiting for the concert to begin when in walked a family who had the front row seats. The couple had 3 young children; about 4, 5 and 9 months. My first thought was “no”! But then I remembered how we would take our young boys to concerts at the Dorothy Chandler and the Hollywood Bowl. We believed that the music would help shape them, (whether it did or not is open to discussion). The kids were so well behaved. They sat quietly, the older boy would drum in the air. At one point they went up on the steps, sat down and watched. The musicians seemed to really like that. The baby went to sleep then woke up but was mostly quiet. Mom took her out at the first peep.
The concert was moving, we thought that it was better this time.

The music echoed throughout the church on many occasions. One fun part was to see that the cellist was the same person who played at the dinner concert. Instruments were the same type used in Mozart’s time. One horn has no valves so notes are made by shaping the lips.

After the concert we spoke to the couple and praised them for bringing their children to a concert.