The City of Assisi

If it is Thursday it must be Assisi. We arrived last night at the Hotel Castillo about 8:30 pm, the restaurant stayed open for us. They served us a 2-course meal: 1 pasta and 2 a meat loaf with gravy and French fries. The gravy had wheat so I was given local fresh pressed olive oil. YUM. 2 of us cannot eat gluten, the other woman can’t eat lots of other things too so it makes it easy for me.

The hotel is high on the hill of Assisi. http://www.hotelcastelloassisi.it/ I never found out if it was old or just made to look old but Assisi is old. Most of the city built in the 1200/1300’s; some older, some newer.

We were dropped off next to the old city, or I should say the new-old city, only built in the 1300’s. We had a tour guide thru the city, walking from old to older, built in BC. So much of it reminded me of Jerusalem, the arches, the stones.

We saw the tomb of St. Assisi, the churches, the small old homes, city walls. All things I’ve seen in the Middle East and China. Funny how it has so many similar qualities.

Lunch was at an outdoor café, great for people watching. A sort of caprese salad with lettuce. But they put out bottles of Balsamic vinegar and local olive oil to use. Now I’ve tried lots of Balsamic and never found anything that tasted more than vinegar. OMG I’m in heaven!!! At least Balsamic heaven. I dumped it and the olive oil on my salad. I could just have those two things and be happy.

But the gelato is so good!!! And the Cappuccino’s, OMG, they are to die for. And meringue cookies. Oh, my stomach hurts from thinking of all the food I’ve consumed! 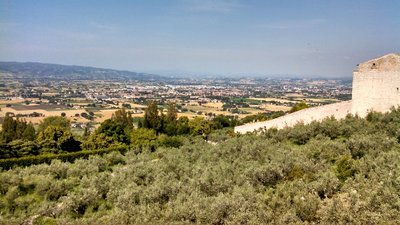 Still no bag. I've been asured that by tomorrow we will know if I have a bag or not. If not then I guess I'll get new stuff. Oh well; I can think of worse places to shop!!! 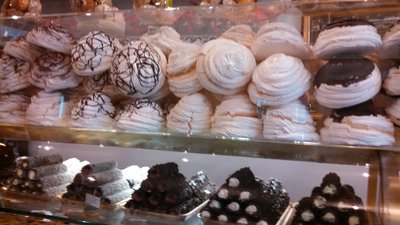 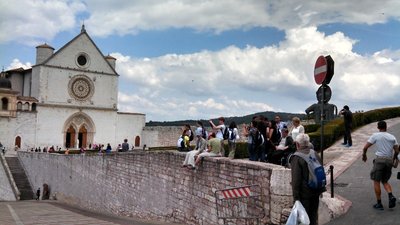