A couple of days in Seattle

We’ve spent most of the last two days in Seattle with Dale’s cousin and his wife. We try to stop when we are in the area, usually passing thru to Canada.

Dale and his cousin were close as young boys and remain good friends even though they see each other only once every few years. They haven’t grown apart and share interests like cars.

Norman and Marty were at a baseball game when we arrived but had left the driveway empty for us to drop our RV. We dropped the RV and the dog then went into Seattle. We did the typical touristy stuff like Pikes Fish Market and the original Starbucks. http://www.visitseattle.org/things-to-do/sightseeing/pike-place-market/

Pikes Market consists of a covered area in which businesses operate, much like a farmers market. Farmers sell fruits and flowers. The cherries are in season and we found some organic which made a great snack. Bought flowers for Marty and a stuffed lizard for Zaya.

There are several fish markets, 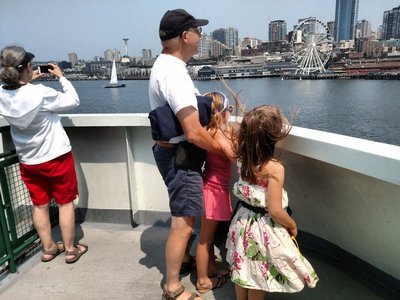 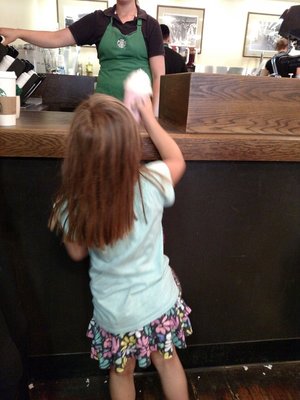 but the best one is located at the end. There are a couple of employees behind a counter then fish on ice just beyond the counter. There are employees in front of the fish counters. When someone orders a fish to take home the employee throws it to the guys working behind the counter with lots of shouts. It is quite a show.

There is also a fake monkfish which has a wire that runs under the ice to the rear. Employees will move the wire making the fish jump. Quite funny to watch people’s faces.

We finally met up with Norman and Marty, arriving at their house just moments before them. We picked up their 7-year old granddaughter and girls got along right away.

Thurs, the 6 of us piled into the truck, drove onto the ferry, and went over to Bainbridge Island. I’m not sure if this was Zaya’s first ferry ride, but she was so excited. She and her new friend/cousin ran around exploring the ferry.

After lunch, we drive back to the ferry for the ride back to Seattle.

One of our son Nate’s friends thought that Nate was in Seattle as I’ve been tagging Zaya’s photos for him to see. The friend asked if Nate would come to his new restaurant. Well, since Nate couldn’t go then we went in his place. http://www.eatatporkchop.com/ Porkchop & Co. What a great little place and fun to meet some of our son’s friends. And a great way to finish a visit to Seattle.