A Birthday in the Badlands

Visiting the Badlands along with celebrating a birthday 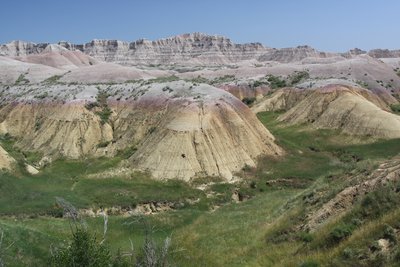 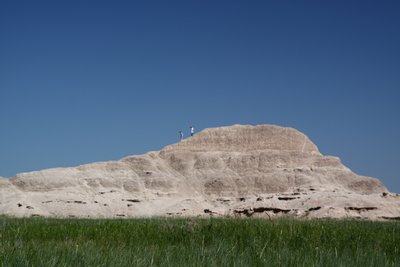 The Badlands are an interesting place; it reminds me of the Grand Canyon in a way. The northern part appears to have larger, taller buttes while the southern side has mostly small buttes. Stripes of orange run across the middle of the buttes.

We arrived in the late afternoon and were pleased to find that there were still sites left with electric power hookups. We found a site on the left side of the road so that we could put the slide-out up and have a view. Kids tumbled out of the truck and started running for the buttes. We made sure that they had a walkie talkie before they cleared out. Apparently they climbed several buttes, a couple quite high and had stories of how they slid down on their butts or did a modified ski stance to slide.

We’d planned to go to the Ranger Talk but a storm came up with heavy rain, thunder and lightning. We ate dinner to the strong summer storm, happy we were safe inside our RV.

We made the requisite visit to the Visitors Center to pick up Junior Ranger materials and get our bearings. We also bought birthday presents for Christabel as this was her birthday.

We had to rush back to the RV as we needed to bake a cake and make her tortilini’s she had picked out from the store. Timing was critical as Charlotte was also going to make soufflé. What we decided to do was to bake the cake then start the dinner. As soon as we sat got up from dinner Charlotte would put the soufflé in the oven.

Dinner went as planned and the Ranger Program was about the stars with telescopes for viewing after the program. We got to see Saturn with several of the moons. Other telescopes were set up but we still had a birthday party to attend to.