We left Oklahoma, picked up Dale in Albuquerque and started to Taos via Santa FE

Twinks and I were on the road at 5:15a.m, on the way to Albuquerque, we had to pick up Dale at 12:40. We sailed along but I was watching the clock. Then I remembered that NM time was likely not the same as Oklahoma time. A rest stop was in order and after a quick bowl of cereal I found that the time was different so I had an extra hour to get to New Mexico.
We got into Albuquerque and down to the area but without thinking got off on the exit before Sunport Blvd. Of course there was road work going on so it was impossible to get back on the freeway for 1 more exit, we had to go several miles out of our way then come back up to the exit we needed.
We got into the airport and I thought that I’d just park quickly then find Dale. We went into an oversize area but there were no places for the truck and RV. Trying to get out of the lot was a major hassle as there was only a little area where the RV wouldn’t scrape the roof. A ticket person came out and helped guide me backing and forthing until I could get the rig out. He directed me to a lot across the street for RV’s.
I got into the next lot and a shuttle came up right away. I looked at the clock and told the guy wait, my husband is due in just a few minutes. I threw Twinks in the RV, locked the doors and jumped onto the bus. After picking up a few more people in the lot the driver asked who was in a real hurry and I told him “I am, my husband is due in at 12:40. Another passenger looked at his watch and said “well since it is only 11:40 you still have an hour”. Opps, I guess I was using Oklahoma time. I went back to the RV picked up my laptop and went on to the terminal.
Dale and I started up to Santa Fe when the traffic stopped. There was a car that had gone off the road and rolled over. We stopped quickly and Dale ran to help the driver as he is an RN. Then before our eyes another accident occurred. We were glad to get out of that accident alley.
We’d decided to eat at “The Shed” a place we’d found when kids were young but it was closed for the afternoon. Apparently many restaurants here open for lunch, then close at 2:30 only to re-open at 5 for dinner. We found La Casa Sena next door and had some wonderful mini fish tacos and mini buffalo burgers while sitting in the patio. We went into their wine shop and got some NM wine for our dinner. Then it was on to Taos.
We set up camp in a campground we’d stayed in before, right in town but then it was too late to eat dinner. Smith’s grocery had some great cheeses that went with our wine at the picnic table under the stars. 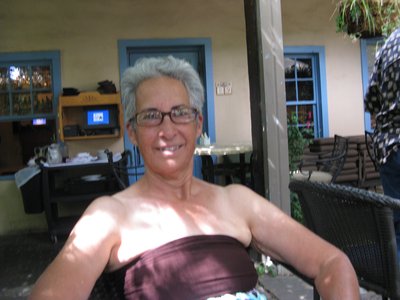 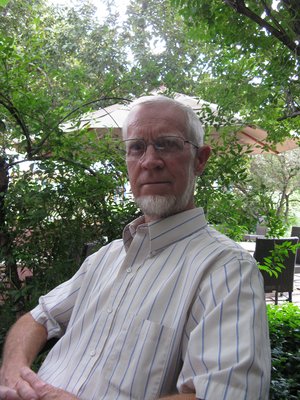