A day on Alert Bay

Bekki arrived a few days earlier than me as she went to a Potlatch while I attended our grandson’s birthday party. The Potlatch was in Alert Bay at the Big House there. She really wanted for all of us to go over to visit the Cultural Center and possibly the Big House during our visit.

We went to the ferry crossing at Port McNeil, about 20 minutes from Port Hardy and drove on when it arrived. The ferry ride was uneventful but really cold. We went out onto the deck but couldn’t stay outside for long.

Alert Bay is a small island with a main road that goes to the right and to the left from the dock. To the left is the Big House and Cultural Center and a burial ground is off to the right. We first went to the Cultural Center, the U’mista. Here there is a wonderful exhibit of masks used in the First Nation ceremonies. The exhibit opens with a film of a Potlatch which explained what Bekki had just recently experienced. She had tried to put it into words but was having a difficult time describing. The masks are on display where they are easy to view without glass. Many of the masks were taken by the government when potlatches were banned and have just recently been returned.

Next door to the U’mista are the remains of the Indian school. This school was where the Indian children were sent in order to forget their language and culture. Much the same things happened in the U.S. and we have our own horrible structures. The children were treated poorly here and some abused. Bekki said that part of the ceremony at the potlatch was to help the adults, who’d suffered here as children, to put it behind them. The school is eerie and stands as a huge reminder to the affected adults and to us of what can happen when we step in and try to make an entire culture change to our way of thinking, when we know what is best for a people. 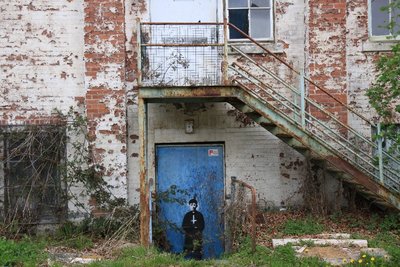 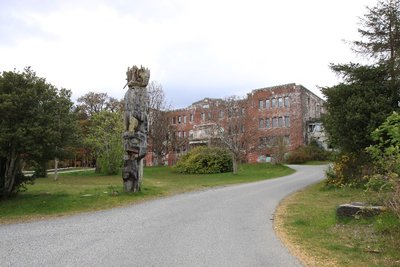 It was quite cold so we found a place by the water for a picnic inside the car, then after lunch we found a coffee kiosk to warm up.
We drove around the island finding places to shoot photos, and then visited the burial grounds. We couldn’t walk on the grounds as they are sacred, but could view from the street. The burial grounds have quite a few totem poles, some new, some fallen. It was a dark foreboding sky, a good day to visit such solemn places. 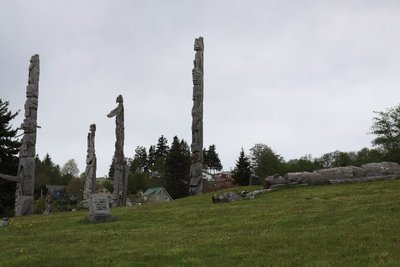 As we waited for our ferry eagles flew around us.