Working Our Way Across the Border

North and on into Canada

Dale and I were traveling in our RV so when we stopped at rest stops, we would park in the RV parking area. We have seen crazy things going on in rest stops; a woman with a small trailer who approached every trucker upon the trucker’s arrival, lots of people begging, that sort of thing. But we had a rude awakening when we realized that at 4 different rest stops people were living in their RVs.

The first was the 1st stop, Northbound, in Washington, when we parked next to a motorhome. When we pulled in, I noticed that the outside skin on the driver’s side was completely separated from the rear. I thought that was strange. When we sat down for lunch, we noticed that parts of the RV were on the ground and both commented that the RV would not be going anywhere soon. Then the apparent owners pulled up in a car and got out, the man appeared to be elderly and hunched over, the woman using a cane. Wow! They must be living in their RV.
We moved on to another pit stop and realized that another woman was living in a motorhome.

At the stop, just before the border, we parked for the night, by yet another motorhome. In the morning we noticed that it was a couple probably younger than us, but the motorhome appeared to be parked there permanently. A young woman arrived with a young man. They were talking loudly and we were packing up so we could hear everything. The young woman called the couple next to us mom and dad. She wanted to introduce them to her boyfriend. It was crazy! We had to think that at least all of these people had a place to stay instead of the sidewalk.

After all that we crossed the border without any trouble. As we have the Nexus passes, we got through immigration within minutes. 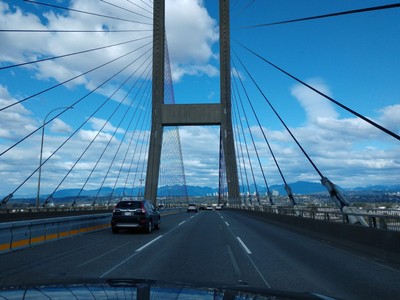 We went on to our campsite in North Vancouver. It’s a place we have camped before. Since we left lots of stuff back in the US we thought we’d better get resupplied. 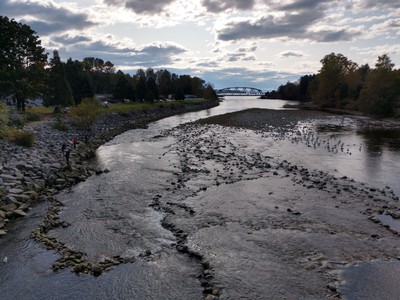 The campground is within walking distance to a wonderful bookstore, Whole Foods, Roots, tea shops, Tesla Showroom, Home Depot, and a mall. We got some walking in and bought basics; food and more books, all of the important things.

A day in Oregon City

Spending a day with our birthday boy and family

We told kids that we’d only stay for a day and true to our word we left in the morning, after a filling a breakfast that included roasted green chilis. This was another morning, another day of driving, working our way north. The next stop was Oregon City.

Clayton and Jen’s house was a 7-hour drive but since we had our RV along, we drove straight to a county RV park close to their house. We arrived too late to visit them that night so made our own dinner and had some nice wine.

Jen had asked if we wanted to watch the 2 big kids participate in their jog-a-thon and of course, we said yes. We got to the park just in time to see Zoey walk into the park with her class. Each grade runs as a group and they run or walk for 20 minutes. Zoey, we noted, would run past us but then would walk the remainder of the way. But the run was to raise money so it didn’t matter. 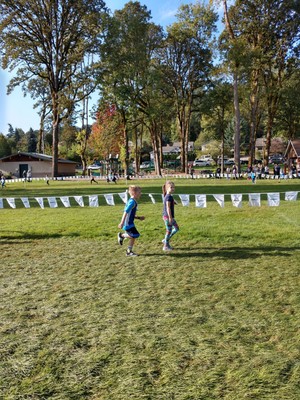 After Zoey ran it was Fynn’s turn. He ran, taking lots of water stops, but he ran. He even let Clayton run a lap with him. 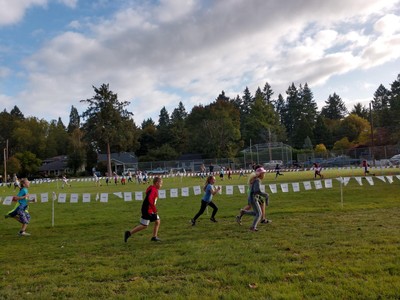 In the afternoon we played at the park with the kids, swinging the babies and watching the big kids run amok. It was fun to play with the kids, we were enjoying our time. 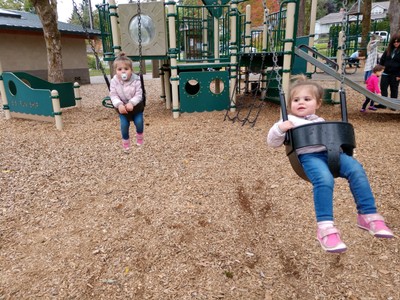 It was Clayton’s birthday and I’d offered to make some dinner but he opted to pick up Thai food. There is a little Thai restaurant nearby that offers many gluten-free items so we always welcome dinner from there. The Thai food went well with the champagne we brought to celebrate.
After dinner, we played with kids, talked to Clayton and Jen and just had a nice evening before going off to the RV.

That evening we started to pack up. We took an inventory of our alcohol, and since we had to leave most of it in the U.S., we packed it up for storage at Clayton’s. We also left food items behind that we knew would give us trouble over the border.

We had a nice breakfast with Clayton, Jen and kids, played for a little while then went on our way.

We drove to a rest stop close to the Canada border then stopped for the night. It was an early evening but we thought it would be better to cross the border 1st thing in the morning rather than try to have any hassles at immigration and get to a campsite late.

Working for Our Dinner

We were put to work on our vacation

Bekki’s parents were at Nate and Bekki’s house prior to our arrival. We always enjoy meeting up with Alan and Julie (Bekki’s parents) as they are really nice and we have much in common, so we were happy to see them.

Bekki had work lined up for all of us parents to do but, as we tell our children regularly, “we are not paid to think and we do only what is good enough for government work”. Our kids knew what to expect from us!

Our job was to harvest the corn. This was not just any corn, but rather corn to be ground into a flour, it is dried on the stock. I had picked corn as a 10-year old child, the 1st time I’d seen corn growing. Before that, I didn’t even think of where corn came from other than the grocery store. So, we were to pick this corn off of the stock and put it into barrels. I quit a bit before the others because I wanted to shoot some photos of it all. 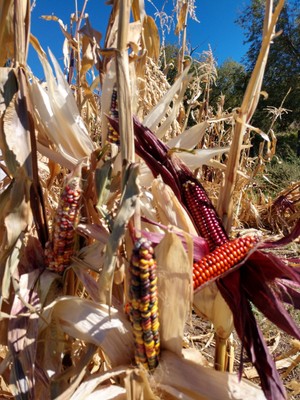 This corn was beautiful, cobs of every color. I was surprised when Nate said that the flour would have some color speckles in it but, because the inside of the kernels was white the flour would mostly be white. I took several cobs for our table decoration. 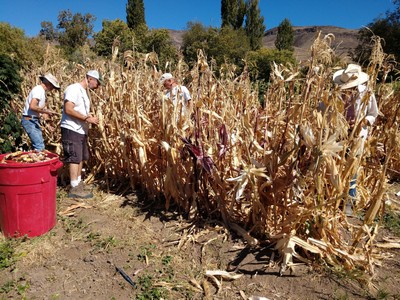 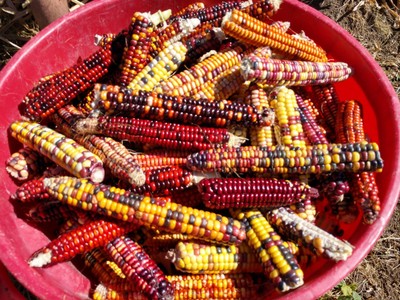 After picking all of the corn and putting the ears into barrels we were tired and hot. We went in for lunch with some nice cold beer/white wine.
Bekki wanted for me to harvest basil but then decided that the basil could wait for another day. We only harvested veggies for dinner. 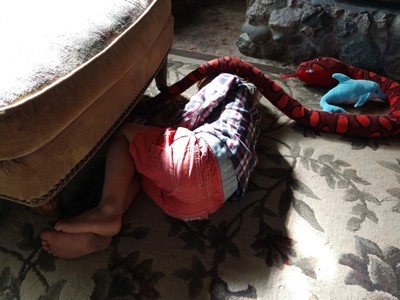 Alan made soup out of the turkey he had roasted last night for dinner and we played the rest of our day away. Kids made sure that we kept busy playing with them.

On to June Lake and then North

We stopped at June Lake for 1 night then on North

We were not in a huge hurry to leave the Sierra’s but did want to get on the road. Since we had to go back down to Bishop in order to get onto Hwy 395 it only made sense to stop at Schat’s for some breakfast goodies. 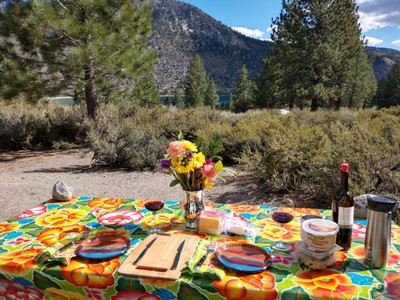 We had intended to go to Mammoth Lakes and look around. One of Dale’s old co-workers had recommended that we go there, that it was one of the most beautiful places on earth. I was sure we went there before but then when we looked at the map, I wasn’t so sure. But, unfortunately for Mammoth Lakes, when we got to June Lake, we decided we really wanted to stop there instead.

We found a nice camping spot with a view of the lake and set up our RV and the site. There were few people camping so we had most of everything to ourselves.

After lunch, we walked down to the lake in order to shoot photos. The sun wasn’t great but it was good enough. I haven’t gotten into the photos on my Canon so there is no guarantee of quality. We spent the afternoon walking through the campground. 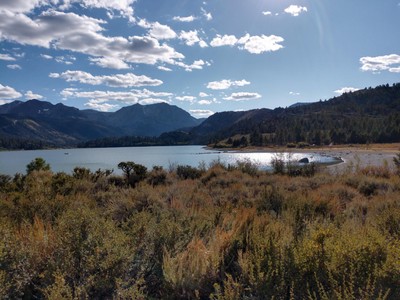 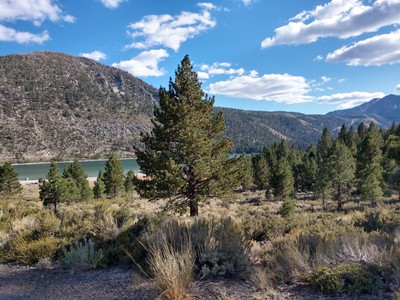 Because we only had 1 day and night left in the Sierra’s we had to get back on the road after a leisurely breakfast. We had a 6-hour drive to Nate and Bekki’s house and we wanted to be there by dark.

We arrived at Nate and Bekki’s in time for dinner. We brought out a bottle of wine and were ready to continue our vacation.

We had a late start but we were on vacation so we didn’t care. We planned for our next stop to be Intake 2 in the Sierra’s, just west of Bishop.

As we got ready to go we realized that we’d be driving by our favorite BBQ spot west of Memphis, the Copper Top in Big Pine. We decided that we’d eat a light breakfast then stuff on ribs and goodies from Schat’s in Bishop then head up the mountain.

We ate our BBQ ribs and then pastries from Schats. An hour later we were parked in our campsite with only 2 other campers in the campground.
The weather was actually warmer than we thought that it would be so we were able to walk from the campsite over to the lake. It was a nice evening for taking photos. 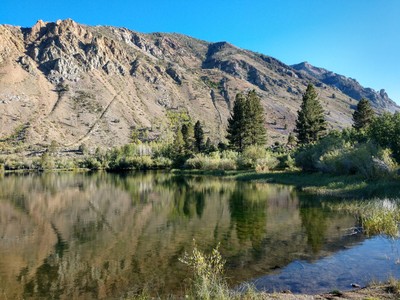 The following day we started by driving up to North Lake. The road up is steep and narrow, sometimes down to one lane, with a steep drop-off. We found that leaves were beginning to turn, some shades of yellow. 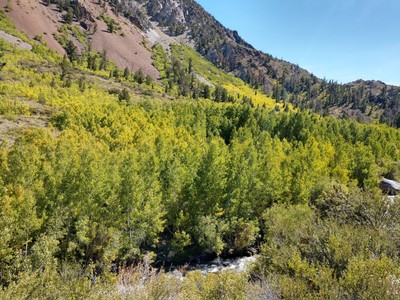 Lake Sebrina is just up the main road. We were here before but this time it was very crowded with tourists. We couldn’t find any place to park so we went on down the road. We drove on to South Lake.

When we arrived at South Lake we were ready for lunch. We parked and walked up a small hill where we found a perfect picnic spot. We set up our picnic backpack, opened a bottle of wine and set out our food. 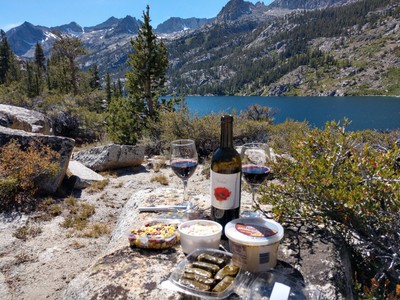 After lunch, we decided for old times' sake to hike a little way to Bishop Pass. We were surprised at how steep the trail was, steps in lots of areas. We were amazed that we could have backpacked this trail with heavy packs years ago to meet our son Justin. 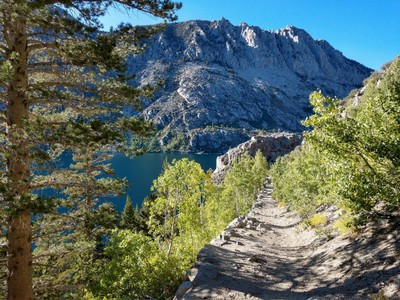 We hiked for a while but turned back in time to return to our truck before dark. We got back to our campsite, made dinner and a nice evening.