Copenhagen, the Last Of Scandinavia

When we first arrive in a new city we either go to the tourist information center, if we have located it on a map, or we find people and ask directions. Copenhagen was no different.

It was evening when we arrived in Copenhagen and we wanted to find a campground. We stopped at the first convenient gas station and the young woman directed us to what she thought was a campground. I hesitated because she only referred to motorhomes so I wasn’t sure that she knew about tent camping.

A tow truck pulled up by us and I asked the tow driver what he knew about campgrounds; sure enough the campground we’d been told about was not for tents. He got back in his truck and wrote out the information to a real campground.

All campgrounds are not equal. The one just outside Copenhagen was not as nice as the others we’d been to. It wasn’t that it was dirty; there was no grass to pitch a tent on, only a strip of weeded stuff and everything had a charge attached. You need to cook? You pay for the time to use the cooktop. You want hot water to wash dishes? Pay for 2 minutes of hot water. Want to use the electricity for anything? Pay up or else. Then to add on, we had to pay for a Scandinavia camping card. Really? We have been camping all over Scandinavia without this and there has been no problem? What a waste of $20. 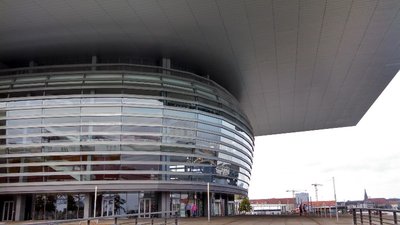 The Royal Library consists of the library and a newer building called The Black Diamond. It is in the Black Diamond that the free exhibition is located which contains original works of Bach, some remains of a book from 600AD and works from Hans Christian Anderson. One book of interest is the History of the World from the 1400’s. Hum, wonder how that reads.

The exhibit is located in the center of the room, in a large circle. On the left wall are drawers in which we found original letters from various people including: Gandhi, Beethoven, Mozart and others. It was so amazing to see the letters up close, glass was covering most of the documents but one is only a fraction of an inch away. 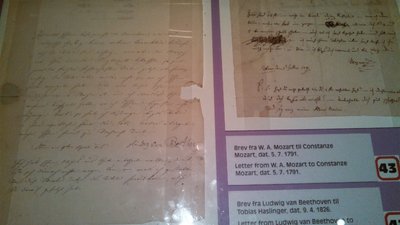 It starting pouring rain as we got ready to walk to Nyhaven but as soon as the rain passed I ran down to take a photo. It is a complete tourist trap, the canal is full of small tour boats, full of people. Everywhere were people. A quick photo was all I needed and we were out of there. 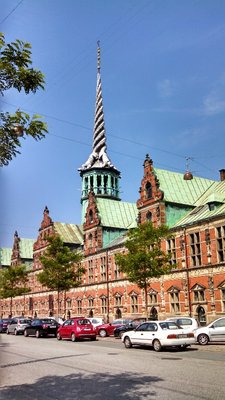 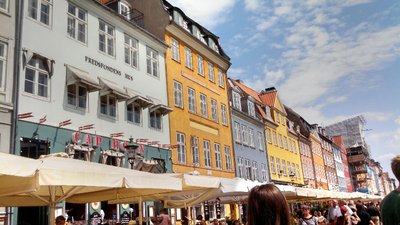