Not the Mickey Mouse kind

Alas, it was time to press on to the next leg, Sheldon National Wildlife Refuge. We didn’t know what to expect, except that there was a pool fed by a warm spring and camping was free.

We started on our way, spending the night outside a town about 2 hours away. We found a parking lot next to a grocery store with a couple of other RV’ers already parked there.

The following morning we finally had some internet and I saw that I had to renew my Texas Adjuster License that very day. This involves obtaining CE’s which I didn’t have enough of. Yikes, I had to spend the day doing the classes. We couldn’t go on to the Refuge as there would be no internet or service there. Instead, we found a camping spot in an RV park, the town closest to the Refuge.

Well, this turned into a real adventure. The Mouse Adventure!

We woke up in the morning to find mouse droppings on the kitchen counter and then found some on the floor. YIKES!!! Now for those of you who know me know that I totally lose it with mice.

When we got to Sheldon we started looking and found mouse droppings in the cooktop as well. I guessed that the mouse was hiding out in the wall behind the cooktop. 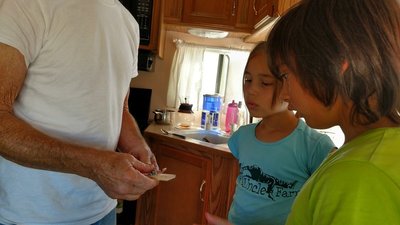 Now, we did have a mouse try to travel with us another time. We were in Mesa Verde with the 4 older grandkids. We’d washed dishes but didn’t drain the water that night. I got up early but there was a mouse in the sink water. I let out a scream, ran back to our bed in the rear of the RV, climbed into the bed and covered my head with the blanket. Our granddaughter had to get the mouse out of the sink and throw it out.

Dale set up mouse traps, one in the cooktop, one on the counter, the rest in different places on the floor. We started to settle down for the night when the traps started going off. First, the one in the cooktop went off. We went to look and I saw another mouse trapped on the floor, then we saw one trapped by the door. Kids threw the mice, trap and all into the fire pit still burning.

Dale set up another trap in the cooktop and low and behold, another one was trapped. We couldn’t believe that 4 mice had gotten in. It was like an entire family had wanted to move and thought that we would transport them to a better place. Well, we did transport them to another place, in another world!

The kids laughed later and I overheard one saying: “did you see grandma? Grandpa started to put the mouse in her face and she started yelling in a funny voice to get it out”? They thought that it was great fun! We must have been quite a sight, me yelling for Dale to get it out, some kids yelling that they wanted to see it, others yelling that they wanted to hold it. We had total pandemonium.

The next morning we woke up to no mouse droppings. I cleaned everything with disinfectant, not leaving anything to chance.

We had to get up earlier than we had been and made sure we all ate a good breakfast. We had a Cave Walk to attend.

There are several caves in the Great Basin National Park and 2 have ranger-led walks. One a 1-1/2 hour walk is more difficult and children under 5 are not allowed. As our youngest is only 4 we had to opt for the 1-hour walk which accepts people of any age.

The cave walk meets up at the Lehman Visitor Center. Lehman is the person who discovered the caves and capitalized on that discovery.
The grandkids were really excited as they have been in Lava Tubes but not a cave. 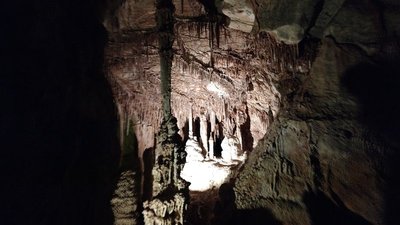 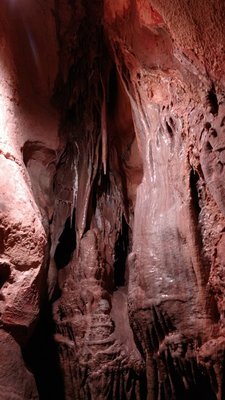 After entering the 1st main room, the ranger turns out all of the lights. Lucian immediately said, “Oh, it is dark”. And dark it is, you can’t even see your hand in front of your face. The walk goes thru several rooms, one so narrow that by sticking your elbows out you'd touch the walls. 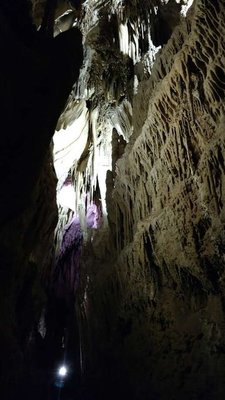 Fortunately, all of us had no fear of being underground, although Dale admitted that the thought passed his mind that it was not a good time for an earthquake.

This is a must see for anyone going into Great Basin!

A Hike in Great Basin with Kids

Like all of our National Park visits, this one started at the Visitor’s Center, picking up Jr. Ranger booklets and learning about the park. Kids had looked at the displays and we all watched the film. The Ranger gave us good info on some hikes that would be easy but nice. The Ranger also gave us some info on nearby cave tours, but we’d need to get tickets online.

We got up late but we needed to go where we had enough internet service to get tickets for the caves. We had to go back to the Visitor’s Center to finally have enough service. After driving back to the RV to get our Senior Pass info necessary to purchase the tickets, and picking up firewood, we were finally ready to hike. 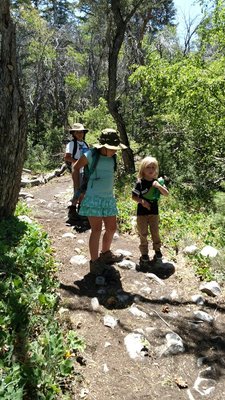 There was a short trail, .6 miles, up to the upper campground, that started close to our campsite. We decided to take that trail instead of one further away. 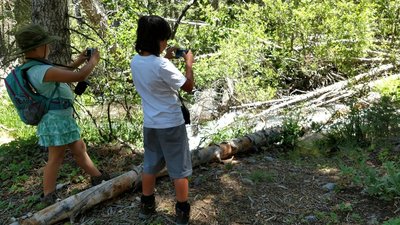 The trail runs along the stream and is an easy walk thru the woods. The trail ends up at a day use area where kids can climb and run. Kids took turns holding their hands in the ice cold stream with me timing them to see who could hold their hand in the longest. A good lesson on how cold the water can be. 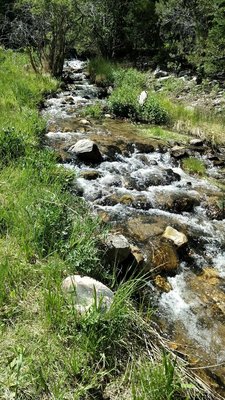 This 1.2-mile r/t trail took about 3 hours to walk, a great afternoon activity.

We were anxious to see Great Basin National Park, and we were looking forward to doing a little hiking and relaxing.

Our campsite had lots of shrubs, tall grass and small trees so we had lots of privacy in the camping area. A strip on the side by the road had the same, and the pull thru was long so that we were separated from other campers on both sides. 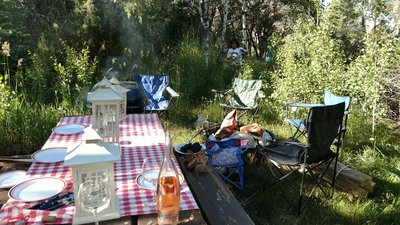 The campsite was perfect for kids to play. A small area of dirt was perfect for the 4-year-old to sit and work with his trucks, the larger shrub area great for all 3 to play “Walkie Talkie Hide & Seek”. Don’t ask how this works but it somehow does. We only heard all 3 kids talking to each other and saw them when they’d come running thru the camp site. 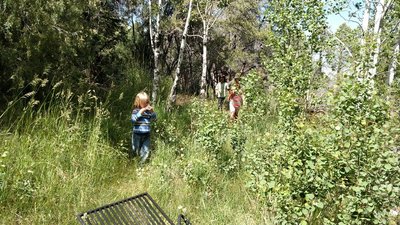 We’d had a long drive and had been on the road for a week, so it was a good chance to set up the RV, do a little cleaning, put things away and just relax.

The Loneliest Highway in America

Highway 50, a wonderful stretch of road

The Great Basin extends from the Nevada/California Border on the west, the SE corner of Oregon on the north, and into Utah to the east. The National Park is just a small portion but includes several different climate zones, from 13,000’ down to maybe 5,000’. We drove over mountain passes where snow was falling and in valleys bathed in bright sunlight. 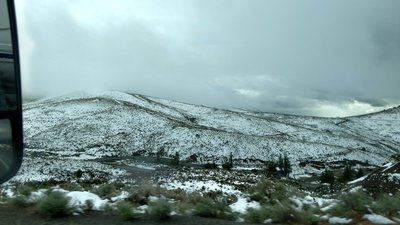 We started Highway 50 at its beginning, the little town of Fallon. We drove for miles, passing thru a couple of old towns, Austin and Eureka. Eureka has an Opera House that I’d love to stop at someday. But today was cold and snowy in these towns so we kept driving. 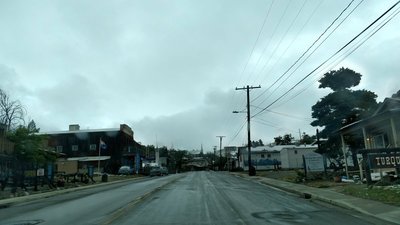 One interesting stop is the Hickison Petroglyphs Recreation area. There is a fairly easy loop walk that goes up a hill and then across to other hills. The petroglyphs are really worth a look, not to mention a chance to stretch the legs. Unfortunately, it was beginning to rain and it really started to pelt us. We were concerned about the muddy road we had to drive on back to the main highway and left quickly after viewing the last of the Petroglyphs. 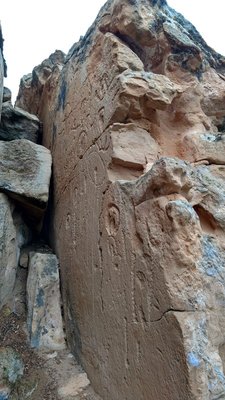 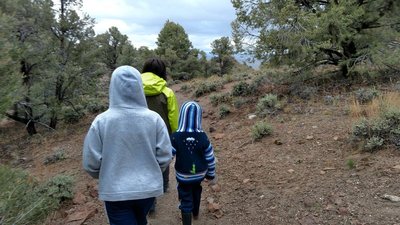 Luckily, there are many pull outs along the highway and few people stopping for the night. We found a pull out with a grand view, and with little traffic were able to get a decent night’s sleep. 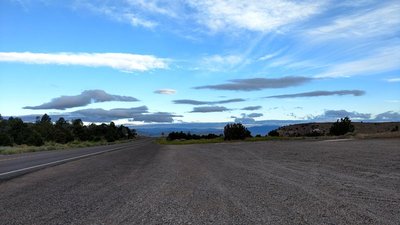