Fathers Day was a rather lazy affair.

Bekki had suggested that we make a trip to Lily Lake, a lake just west of Ft. Bidwell, in the mountains. We packed up kids, food and wine into their car and drove up the dirt road to the lake. The road had several downed trees that had to be driven around and one spot where Dale put some branches over the edge of the road to be used to drive on.

We were surprised that quite a few people were at the lake, it seemed so remote to us.

We’d forgotten a corkscrew so asked around if anyone had one. One guy came over with an awl and a screwdriver. As Dale was pulling the cork out with the awl, the guy came back with pliers, in the event, 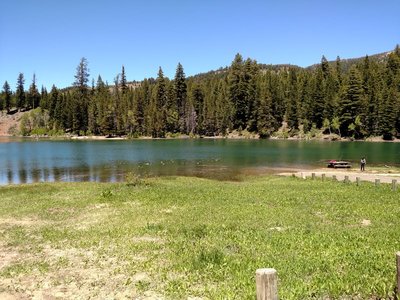 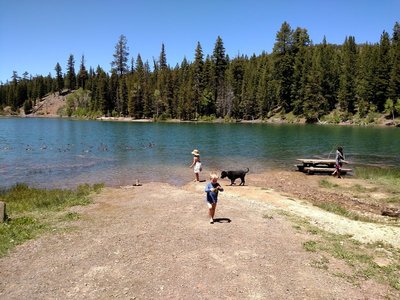 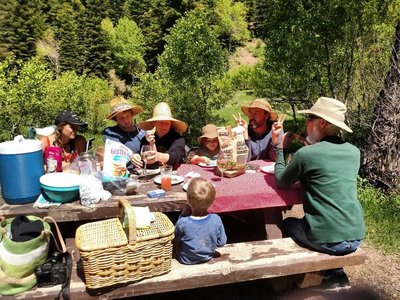 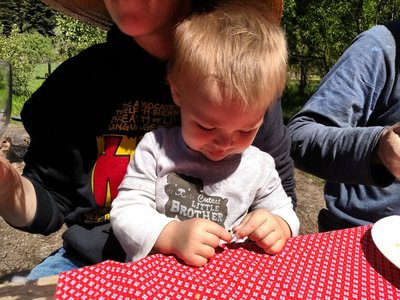 Dale could use them. We offered him a glass of wine but he preferred the beer he brought.

In the evening, we went down to Nate’s closest neighbor as she had invited several people over for dinner. She is listed in a directory for people who want to do some organic farming and 3 women were working with her, one brand new and another who’d been there for a few days. It was great to meet new people, ones who are so involved and kind to our kids, not to mention, have some great food.

Fun On A Road Trip

A Farmers Market and a Pirate Festival

So the plan for this trip is: drop off almonds in Larkspur, go to Vallejo and visit an adjuster friend, then head up to Ft. Bidwell to be with our oldest boy and his family for Father’s day. On Monday we will head up to Oregon City to help out our youngest son’s family while he is traveling, then all of us will go to Seattle to play for a few days. After Seattle it is back to Ft. Bidwell for our granddaughter’s 16th birthday party. Then home. We’d thought about going up to Canada, but think that we should go home before departing for Alaska.

We made it to Larkspur before the market opened, about a 3-hour drive with the RV. We carried almonds to the Fat Uncle stand and the woman working it set up everything. 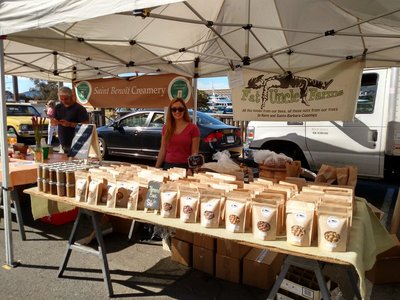 After the market opened we walked around, I was looking for coffee. We’d been in a huge hurry and hadn’t taken the time to make any. Instead, I found a stand that had Navarro wines, Pennyroyal wines and cheese made from both goat and sheep milk. We sampled wines paired with cheeses. OMG, I wanted to just crawl into the sample box and absorb the wonderful cheeses. Wine was great too, we just may need to join the Pennyroyal wine club.

We did find coffee and moved on down the road to Vallejo to meet our friend Joe. Joe is an adjuster friend who I got to know several years ago. His wife is a wonderful woman, but unfortunately working.

Joe, another friend of his and I left Dale to sleep and we went off to the Pirate Festival. If you have never been to a Pirate Festival you need to go. I thought it would be more of a kids affair but there are people who go all out. The Festival in Vallejo is at the river front. There are singing groups at various places, a canon fight, performers, food and lots of vendors. Many booths sell pirate or that era style clothing, some very nice. There’s also hand-made jewelry and pottery.

The Pirate Festival was quite fun and I told my oldest son that our grandkids would like it. He thought that they would try to go next year. 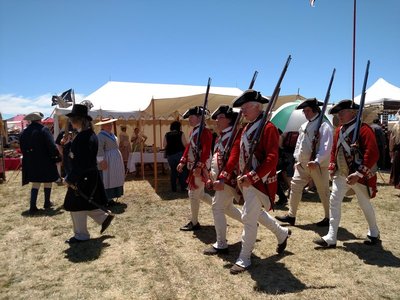 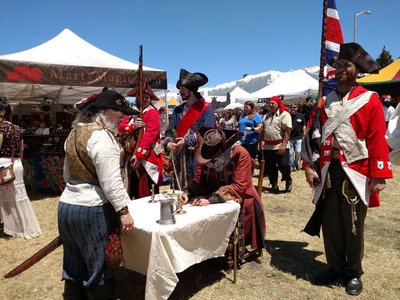 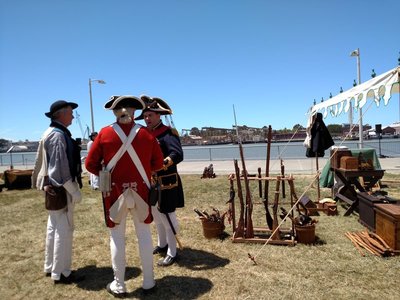 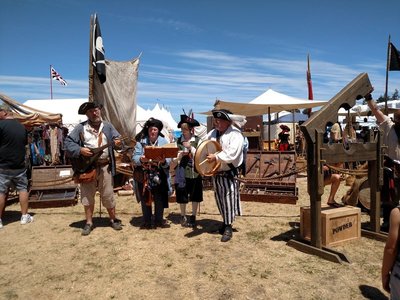 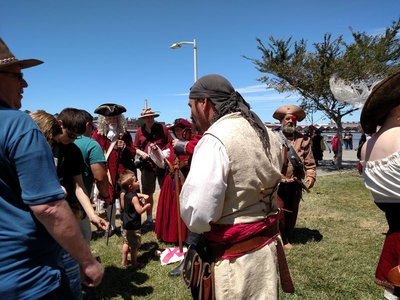 From Vallejo, Dale and I had a 7+ hour drive to Ft. Bidwell. Although we were on the same highways as our daughter-in-law, we were unable to meet up for a meal. We only saw her when she flew past us on the road. But the drive was nice and it was great to arrive at Ft. Bidwell.

Murphy's Law When Trying to Leave

It is really always something

Another 24-hour turnaround trip. We had planned to leave early Sat morning, drive to Ft. Bidwell, then on to Oregon. Well, that plan changed quickly.

Nate called and asked if we’d deliver almonds to their newest farmers market, in Larkspur, just north of San Francisco, a 4-hour drive without the RV. But we’d need to be there by 8am Sat. This meant leaving Fri evening and sleeping at a rest stop. No rest for us, that’s for sure.

Then we heard from an adjuster friend that he could meet up with us Sat a.m. and maybe we’d like to go to the Pirate Festival in Vallejo. Now that sounded fun.

We didn’t need to do much for the RV, except for a good wash job and to refill the water tank. I also wanted to pack more clothes as we will be gone for a couple of weeks.

I had several loads of clothes to wash and also promised a sick neighbor that I’d make her some chicken soup, making the stock from scratch. As a daughter-in-law was sick too, I said I’d make her soup also.

While roasting chickens, making the stock and soup I did laundry and repacked the RV. We were about ready to leave to pick up product from our middle boy when Dale was making a last close inspection. He found a bulge in a rear tire of the RV. He changed the tire and put on the spare. Upon closer inspection he found that the steel belt was actually worn thru.

Dale then went to the other side of the RV and found that the rear tire also had worn thru to the steel belt. Mind you, it was 5:15 on a Friday afternoon.

We got online and by that time, the tire store we usually shop at was closed. We found one open until 6 so Dale quickly went there. Unfortunately, there were no tires for our RV. Dale then went to Costco where they did have tires to fit and were open until 8pm. Unfortunately, Dale had rushed off without any cash, check or debit card. But he came home and got back to Costco by 7:30pm. 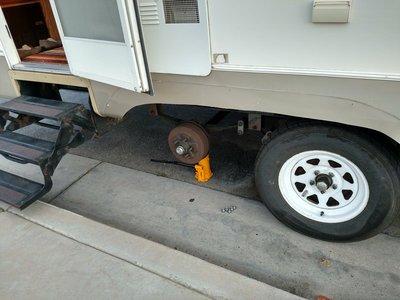 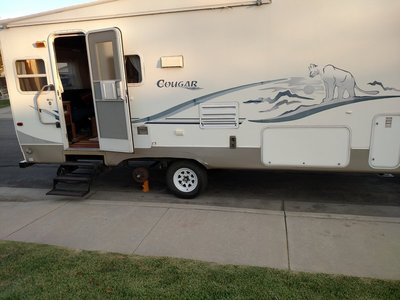 Finally, by 9pm, we were off. 1st stop, the kitchen to pick up the product. On the way Justin called, he’d forgotten some paperwork at his house so we should stop there. We got to his house, nope, now we were to go to the kitchen. We loaded up the product but then had to go back to his house as there was something more we needed to pick up.

Back at Justin’s, we ran in to deliver food and say hi to everyone. I’d left my door open as we’d just run in and out.

We finally jumped into our truck, it was pushing 10:30 by now. We got down the road when Justin called. Oops, we were missing someone. Twinkle had gotten out and we’d left her behind.

Back to Justin’s to get Twinks.

Finally, we got on the road and drove ½ way to Larkspur. A very late night and we were so glad to see the rest stop.

And it is all good

We woke up to a fridge working, everything refrozen in the freezer and everything cold in the fridge. What a relief, however, much of everything will need to be tossed. But when one considers misfortunes suffered, we won’t complain.

We needed to pack up the RV so didn’t have much time to spend around the campground. We needed to stop at Schat’s for last minute purchases and wanted to pick up bbq for dinner. It is always about the food! 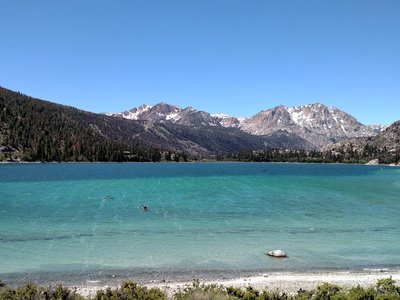 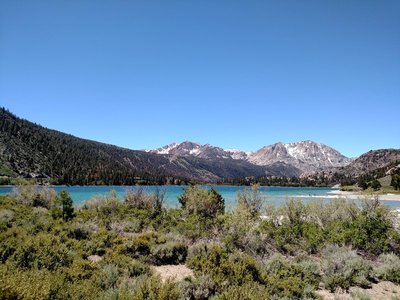 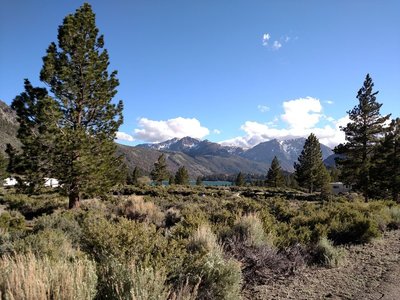 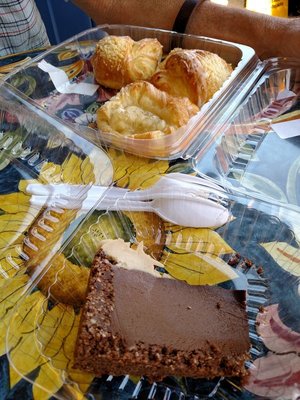 A chance for some alone time

Bear cans had to be returned to the Interagency Office and who better to take care of that than the 2 of us. Besides, we needed a little away time!
We decided that we’d catch some cool air, and decided to camp at June Lake.

We got away late so didn’t get into the Lone Pine area until late. Then we drove up to the Lone Pine campground and couldn’t really tell which sites were easy to back into. We ended up camping on a sloped pull thru. 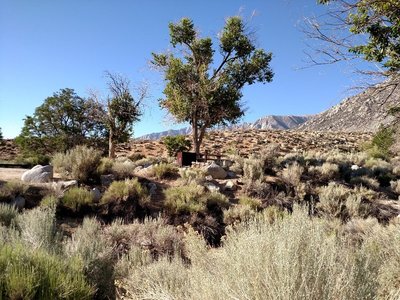 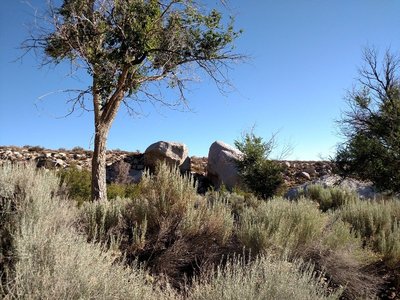 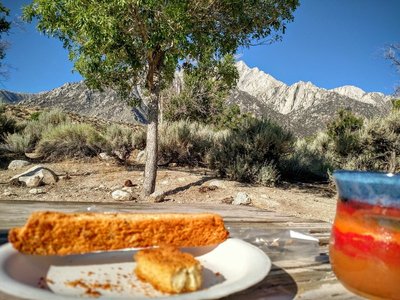 After dropping off bear cans we started the drive up to June Lake. We’d had a biscotti at the campground and thought we’d make it to Shat’s in Bishop for a snack.

I was driving when I drove thru Big Pine. The speed limit is 25mph and since the air was cool I put the windows down. As I drove we caught the smell of BBQ. We passed this little place, it appeared to be an old coffee kiosk. But some people were there, in line and some eating. I made a U-turn and back we went. We split a tri-tip meal that was the best I’ve had. We were so full and happy!!!

After a stop at Shat’s for Macaroons and danishes we were off to June. Off to the cool air! But be careful what you wish for, it just might come true. We found June so cold and windy, low 50’s with wind gusts up to 45mph. Thank goodness for down coats and thermals.

Dale called the RV repair that we go to for everything and the owner said that because we’d parked overnight on a slope, the fluids had mixed. He said for us to turn off the fridge for 4 hours then try to restart. We were not happy thinking that now here might be another expense. Especially, as we are leaving this weekend for an extended trip. UGH.

We did as directed. I used as many veggies as possible with our defrosted shrimp. We drank our not so cold champagne. But enjoyed the view anyway.

After 9pm I reset the fridge and we hoped for the best.