Tokyo, the palace and the Japanese Octoberfest

After a ride back to Tokyo on the bullet train we found our way to the hotel using the map book. We are becoming quite proficient in getting around, but of course with addresses in Chinese or Japanese we find people can help much easier.
I was very disappointed when I found that neither Kubiki nor the Noh were playing this week as I`d wanted for Mike to see one. We also missed the Beijing Opera which is fun.
Instead we walked thru the extensive Imperial gardens at the Imperial Palace. Here we were disappointed that the Emperor did not receive us but we were well received with the common people. Nevertheless we were impressed with the massive walls around the palace, some stones were chest high to me. I though of Justin and Jenavieve and how they would appreciate that rock work but they would not be anxious to work on that wall in the 1600`s. The walls stand several stories high but there are gaps between rocks so it is difficult to see how intruders would be kept out.
We walked from the gardens to the Ginza district. It has changed since I was there in 1970 but as it was still light out I suggested that we sit down with coffee and wait for the sun to go down. We ducked into a little british pub and drank a beer instead.
After it was darker we started walking all over the Ginza, looking into shops and restaurants. The area under the train tracks is full of tiny restaurants so it was fun to peek into them, looking at the plastic food or photos of food.
After walking for quite awhile we ended up near a park and heard music and shouting so of course we went to investigate. We found Octoberfest going complete with German beers, sausages and actual German bands. The normally reserved Japanese were singing along and waving little German flags. As the evening went on some of the German band members, complete with laderhosen, went thru the crowds singing and yelling and some of the visitors who had been drinking for some time started dancing on the tables. It was absolutely wild and quite funny to see the Japanse version of Octoberfest in May.
I shot some video so will post it on U-Tube when I return.

A beautiful day in Kyoto

Wow, we just got to spend the entire day with my friend Yayoi and at one of my favorite places in the world, the Temple of the Golden Pavillion.
Yayoi got here by 8a.m. and we went to breakfast nearby. Yayoi knows that I love to eat and we always laugh about our visits and how they are about eating. She had checked for a restaurant that would serve a Japanese breakfast so she knew just where to take us. We had grilled salmon, miso soup an egg and some veges.
With a full stomach we were able to get on with the business at hand, getting to the Golden Pavillion. Rain was forecast but the skies were full of puffy clouds and sun, a perfect day for Kyoto.
We saw the Golden Pavillion and walked the gardens. I wanted for Mike to have tea in the tea house, something Yayoi and I have done. Then after buying the mask that I`d waited 8 years to buy we went our our way.
We`d decided to have some lunch before going to a shrine and I found that I`d left my cell phone at the Pavillion when I was trying to get coins out of my money carrier. I was lucky as the phone was at the booth still and the women there were so happy when I showed up. I was very happy too.
It was back to lunch then off to the shrine. I`d read about the shrine, where they put on a Noh play on June 1 & 2. We were going to miss it but they were setting up for the play in one of the courtyards. Apparently they have a bonfire also. I really want to come back for that some year.
We were walking in the gardens where they shape pine trees using the same techniques as those used for bonsai trees. Mike stepped back to get a photo but stepped off of the walkway, stepping down into the little lake. He went crashing down and we about died laughing. Fortunately he had his camera in his left hand so it did not get wet. Another visitor was behind us with his camera and I really think that he video taped it. He followed us the remainder of our walk always just behind enough with his camera in his hand.
We headed over to the Goin Corner located in the old part of Kyoto where we saw a 1 hour performance of Japanese dance, puppet show, music and things typical to Japan. Then it was off to dinner of sachimi, and lots of good stuff. We picked up more street food then brought it back to the hotel where we made tea and ate again.
All of us are fat and happy and Yayoi rolled off into the taxi to go home. I`ll be back again someday.

Left Beijing and after riding the trains we are in Kyoto

We had a early morning flight so didn't even get breakfast. The line was long for the international flight but a ANA official told us to come with her, which we did. She tried to do a quick check in but when it didn't work she took us over to the premier line and checked us in there. This gave us better seats with lots of leg room. We sat smug as the poor saps filed on to the back of the plane.
We were a little concerned about catching the bullet train to Kyoto out of Tokyo because we'd heard that the train station is very busy with multilevels of tracks and over 3000 trains per day going thru. I asked the guy next to me on the plane and he gave some directions to the JP desk. Then the JP person gave us great directions and had us actually go one stop past Tokyo to catch the bullet train. Thus we avoided the hassles associated with Tokyo.
We checked into our microscopic rooms and went across the street to a local's restaurant where we ordered a dish each. We were still hungry after that so ordered more and more. We have the excuse that we are bulking up for the trip home when we will do without because of the small quantites of airplane food.
For those of you who know me well know that I love to eat. Well never fear, I've eaten my way thru China and am now working on Japan. I have HELL to pay next week as I roll into the gym.

Hangzhou in the morning and back to Beijing

I was really glad that we had visited West Lake yesterday afternoon. The skies were really grey, smokey this morning and photos were not even an option. We first went to the silk market as Mike wanted to see if there was anything better than the silk he had found in Beijing. There wasn't but I found some silk items that I really liked. I had to just walk away.
We then went to the park where it was so smokey but we walked a good way around it. We then realized that we were a little hungry and needed to eat then get back to the hotel. Had another flight to catch.
So here we are in Beijing our last evening in China. We got here a little late so had to rush to get to the shops for Mike's last second shopping. We haven't eaten yet but will find something.
It is warm out tonight and we have seen a bunch of foreigner's, as if we are not. It is so funny as we have seen so few until tonight. I guess they are all coming for summer holiday.

A quick flight from Yichang and we arrived late morning in Hangzhou, a city fairly close to Shanghi. 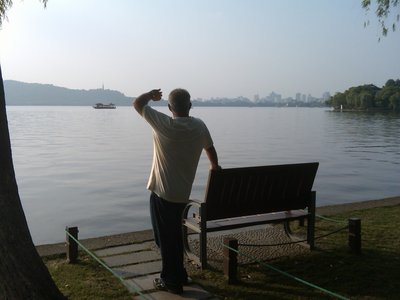 There are beautiful places on this earth and Hangzhou is certainly one of them. There is a lake, West Lake, where an emperor lived which is quite large with gardens around the permiter. Paths run throughout the gardens and a path goes around the lake.
There are 3 islands in the lake, one large and 2 small. The large one has a resturant which has been in that location since the 1800's. We stopped there and had the local famous "Beggars Chicken" a chicken stuffed with beef and cooked in a pot. Yum!
The afternoon sun was nice although the skies were overcast a bit. Still photos came out well.
A nice way to spend our last afternoon.
"The Lonely Planet" has been our bible throughout this trip and it suggested that we go to one resturant for the crispy fried potatoes with chilies. We thought that we'd go thru the night market and then on to the resturant. After walking and looking for the resturant for about 1 hour, and asking many people we finally found it. I'm not sure that the potatoes were worth the effort, but we saw a bit of Hangzhou that was off the beaten path.