Another day in Helsinki

After oversleeping and missing our free breakfast, we had to rush to the Cathedral at Senate Square for the free noon concert.

We arrived at the Square before noon and were surprised to find a group of people on the steps singing. We were under the impression that the concert would be inside the Cathedral, but it was outside and not at noon.

More people, both young and old, joined the chorus then Saint Nicholas and young kids joined in. They sang songs that we did not understand the words to, but we enjoyed them anyway. Then the group finished with Finlandia. We think we’ve heard it performed 4 times now, but then we are in Finland. 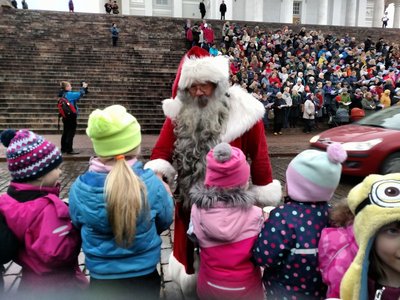 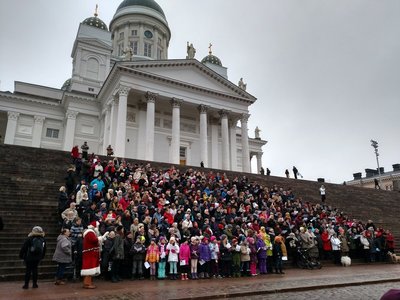 We later came back to the Christmas Market as there were some candles that I wanted to take home. After we bought the candles we discussed whether we should have some Reindeer Sausage, we were not very hungry. I thought we should try it just because we were there. While we were at it, we decided to have more Gluhwein and some traditional Eastern Finnish pie. 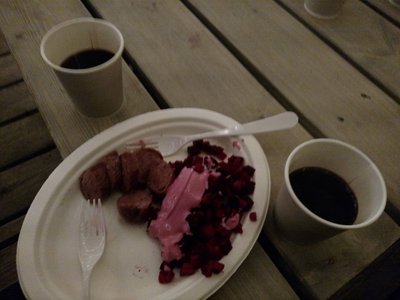 The food was so good and with stomachs full of food and insides warm from Gluhwein we walked off to the Music Hall for the evening concert.
We got to the concert hall, Dale in his best Levis and hiking boots, I in my best cords and warm LLBean boots, all dressed in our best. Fortunately, we passed through the people dressed for a concert. No one seemed to pay attention, or at least they were polite.

We did feel very glamorous drinking champagne with Christmas spices during the intermission. But it was easy to feel glamorous inside of the beautiful music hall. 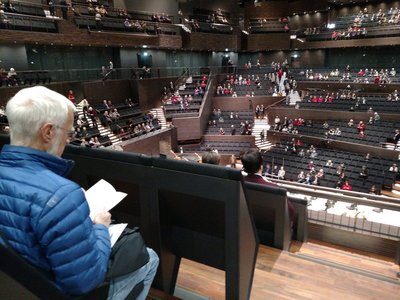 Even though we couldn’t see the stage when we sat back in our seats, the music was pure and sweet. We just enjoyed.